The Ukrainian Band Kallush Orchestra which won Eurovision’s this year’s contest has been able to raise $900,000 for Ukraine’s military after they auctioned the trophy to a crypto exchange.

The invasion of Russia on Ukraine is in its fourth month and has claimed thousands of civilian lives and such contributions from its people are what make Ukraine stronger. 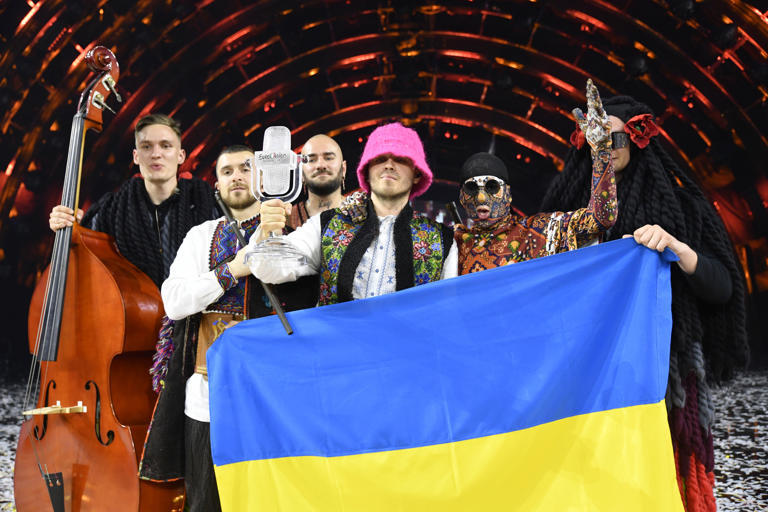 Selling of the Trophy

The trophy which was a glass microphone was auctioned off on Facebook and it fetched $1.2 Million from the highest paying bidder Whitebit which is a cryptocurrency exchange.

“You guys are amazing!” Kalush Orchestra wrote on Facebook following the sale. “We appreciate every one of you who donated to this auction and a special thanks to the team [of cryptocurrency exchange platform] Whitebit who purchased the trophy for $900,000 and are now the rightful owners of our trophy.”

Kalush Orchestra sold the crystal microphone of Eurovision 2022 for $900,000. The money will be used for the needs of the Ukrainian Army. pic.twitter.com/4dqyjZGgjF

Use of the Raised Money

The frontman of Kalush Orchestra, Oleh Psuik had previously announced on Instagram that money raised from the auction of the crystal microphone will be used to buy three Ukraine developed PD-2 drone systems.

The Auction of the trophy coincides with the Kalush Orchestra’s arrival at a charity concert which was held at the Granedburg Gate in Berlin. The concert was arranged to raise money for the medical supplies needs of the Ukrainian citizens, especially in the east.

“Yo, important info👇Our auction has gotten so big. There are hundreds of people offering to help with distribution, donations, and organizational issues! Ukrainians are cool 🇺🇦💪” “So to have time to implement all activities and raise a record €1 million for the AFU (to buy three PD-2 drone systems), we are postponing the auction to May 29 (Sunday).” “The stream will begin at 7 p.m. on all Kalush and Prytula platforms. Let us know ❤️ if you want to win! #StefaniaForUkraine” is what the post on Instagram informed.

As per reports Oleh even raised another $370,000 by selling off the signature pink bucket hat which he wore while he was performing at the competition. During the auction held a random person was selected and a citizen of the Czech Republic got the famous pink hat.

🇺🇦 Kalush Orchestra are donating all of the funds to support Ukraine’s military. pic.twitter.com/6e6AxXuUsj

In total the band was able to raise a total sum of $1.2 Million to help their country in such distressing times. The proceeds from auctions will be directed towards the charitable organisation of Ukrainian Television personality Serhiy Prytula who is one of the people who took up the responsibility of procuring aid and military equipment for Ukraine.

Prytula said at the end of the auction that the Eurovision trophy “brought to Ukraine by the band Kalush … now becomes the property of the crypto community.”

The band won Eurovision even after the Italian police claimed that there was a series of Cyberattacks directed towards them by the Russian hacker groups.

The band that won this years Eurovision with their song “Stefani” has a wave of public support riding in their way as the conflict in their home country persists and they decide to contribute in their own way.