Americans aren’t cheerful about America’s independence. After the recent Supreme Court judgment overturning the landmark Roe Vs. Wade, Americans don’t feel that they are free. Celebrities have boycotted July 4th as the United States takes away abortion rights from women.

Celebs Aren’t Sure What To Celebrate…

America witnessed its 246 years of freedom on July 4th yet many feel they aren’t independent in reality. This year’s independence day saw outrage and protests as many fear what rights the Supreme Court will go after next. The disgraced judgment overturning Roe Vs. Wade, which guaranteed the constitutional right of abortion for 50 years, has put many Americans at odds with the courts. 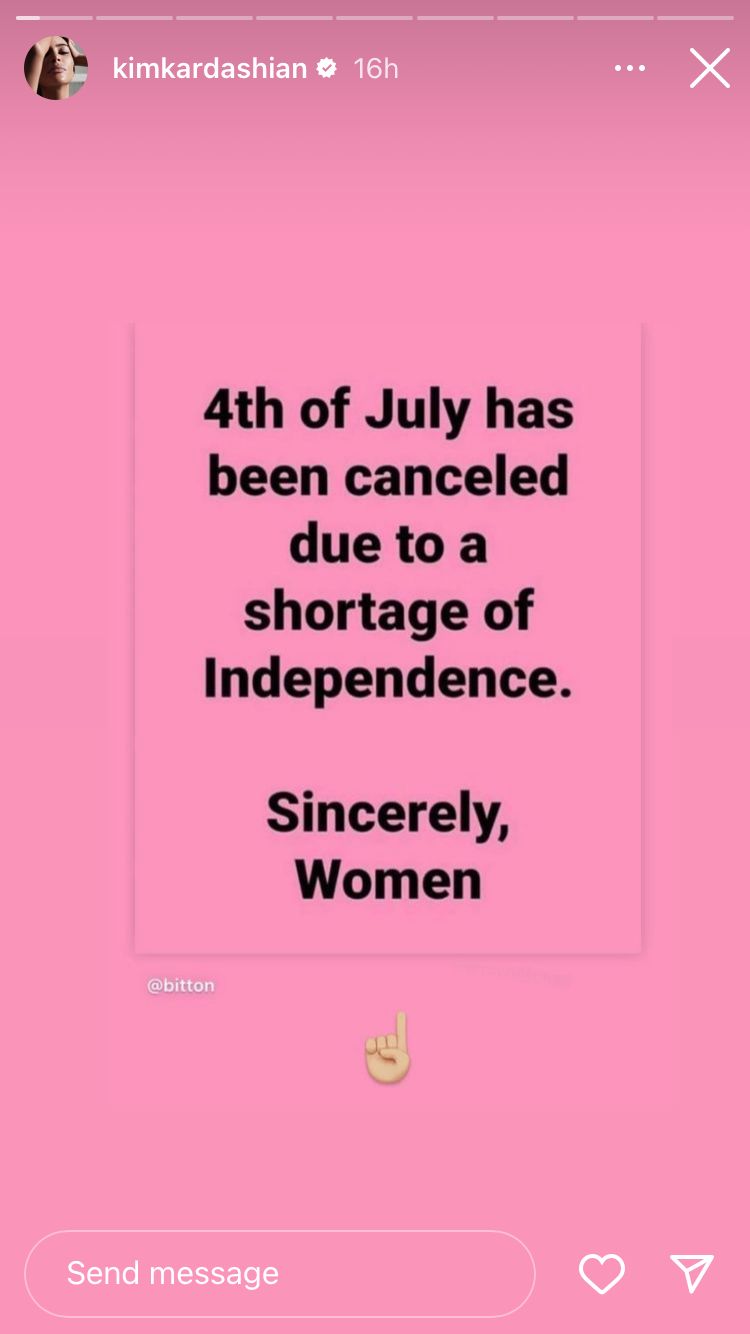 Not only common people,  but many celebrities called for a boycott on July 4th. Kim Kardashian was one of the first stars to boycott the day. “4th of July has been cancelled due to a shortage of Independence. Sincerely, women,” read the post, which she reshared from another user. Kim’s mother, KrisJenner and singer/actress Bette Midler also reshared the post to the social media accounts.

Braunwyn Windham, a former cast member of the “Real Housewives” franchise, posted a photo in which she is dressed up in a costume from the hit show “The Handmaid’s Tale,” which details a fictional futuristic society in which women lack basic rights. In a long caption she wrote:

“The fact that women across the country lost the rights to their bodies and healthcare, that kids are being murdered at school, the hundreds of anti-lgbtq+ on the ballots, and black people are still being shot by police for the colour of their skin….But I guess if you go back to the roots of this holiday, it’s white men protecting their money and power, and we sure are keeping to that tradition.

She added,  “Independence Day can mean a lot of things, so today I’m using it as a marker in time, I’m honouring my independence to myself, stepping away from relationships that don’t benefit me and learning to live life unapologetically myself.”

Actress Jessica Chastain posted a picture with her middle fingers up and tweeted, “Happy ‘Independence’ Day from me and my reproductive rights.”  Katy Perry quoted her famous hit “Firework” to speak out on Twitter about Roe v. Wade being overturned. “Baby you’re a firework’ is a 10 but women in the US have fewer rights than an actual sparkler smh,” she wrote.

Padma Lakshmi, host of Bravo’s “Top Chef,” also slammed the decision. “Not much to celebrate this 4th, I’m afraid,” she wrote on Twitter. She added, “No matter what, we’ll keep fighting for the day where all humans have the same rights, at least of their own person and body, have privacy to make their own choices and to love whom they love and live in peace.”

People With Wombs Are Just That: People…

OK Fourth of July, are you planning on celebrating it?

There are more than 90 million women of reproductive age in the US; 576,000 transgender men and 1.2 million adults who identify as non-binary – many of whom will also be affected by the ban. While America is portrayed as “the land of the free” and home of “liberty and justice for all”, the overturning of Roe Vs. Wade has taken away that thought from most Americans.

America is depicted as ‘the land of the free’, a place to realise a ‘dream’ and the home of ‘liberty and justice for all’, but many feel the overturning of Roe v. Wade proves this is simply not the case.

With their independence seemingly crumbling, increasing numbers of people are boycotting their country’s independence on 4 July. Apart from celebrities, many American cancelled their plans to celebrate the significant day in the wake of this infamous judgment that took away abortion rights from women. Texas resident Ali, a 30-year-old purchasing agent, who uses she/they pronouns, originally planned to go to a BBQ with her family on 4 July, but now does ‘not feel there is a reason to celebrate.

I won't be celebrating July 4th this year as I have no independence in this country. I also don't make as much $$ as my peer male lawyers, my menstruation isn't covered by health ins, I pay more in interest rates & I'm unsafe & harassed constantly-anywhere. Hard pass for me.

Ali is far from the only American choosing not to celebrate on 4 July. Attorney Ashlie Weeks shared her plan on Twitter and wrote: “I won’t be celebrating [4 July] this year as I have no independence in this country. I also don’t make as much [money] as my peer male lawyers, my menstruation isn’t covered by health ins, I pay more in interest rates & I’m unsafe & harassed constantly-anywhere. Hard pass for me.”

Protests both for and against abortion rights have broken out around the country since the high court voted to repeal Roe v. Wade last month. Since there is no federal law protecting the right to abortion in the US, the overturning of ‘Roe vs. Wade’ leaves abortion laws entirely up to the states.

The decision to ban abortion has sparked a wave of agitation among many Americans who remain at odds with the court. Justice Alito, in his final verdict issued on Friday (June 24) wrote that Roe Vs. Wade and Planned Parenthood Vs. Casey, which granted constitutional protections for abortions was both wrong the day they were decided and must be overturned.

In the 21st century, America has to once again witness the plight of many as the ruling is expected to disproportionately affect minority women who already face limited access to health care. After millions of women lost their chance to make independent decisions about their bodies, many are asking the question: what is there to celebrate?