Andy Dick who briefly ran his Andy Dick Show on MTV was arrested at his California trailer park for sexually assaulting another man in Orange County, California. Dick was reportedly living in an RV with a group of live streamers. Read on to learn more about the incident. The 56-year-old comedian Andy Dick was hauled off in handcuffs after the police officials arrested him for felony sexual battery against an adult male who claimed that Andy had sexually assaulted him.

Orange County Sheriff’s Department spokesperson Sgt. Scott Steinle revealed that they received a call around 9 a.m local time on Wednesday from a campground facility in O’Neill Regional Park, CA. The call came from the alleged victim of sexual assault whose name has not been revealed. Andy was arrested at 11:15 a.m local time.

Andy’s arrest was streamed on Captain Content’s RV live stream. In the video, several Orange County Sheriff’s deputies can be seen conversing with Dick before cuffing him and taking him away. However, the reporting male was taken to the hospital for examination.

It was also revealed that Andy was living along with a group of live streamers at the site in RVs for some time now. The live stream also showcases sheriff’s deputies entering his trailer and searching it after he was placed into custody. The officials also asked to collect the male victim’s pants as evidence.

The Victim is called JJ 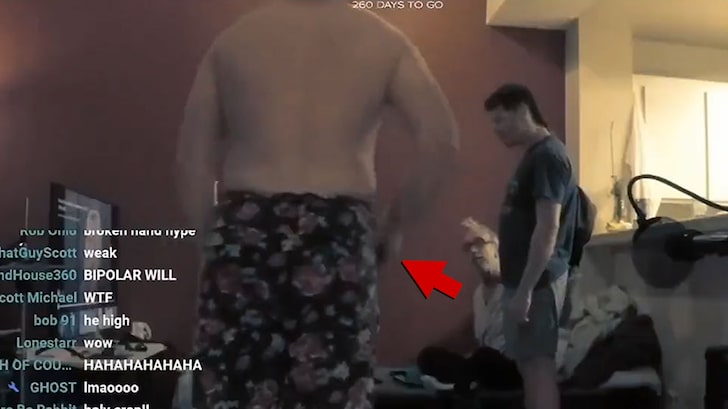 The police may have not released the victim’s name, but the Youtube channel “Captain Content RV”, which captured Andy’s arrest revealed that the victim goes by the name of “JJ”. He has accused Dick, 56 of molesting him in his sleep.

In the clip, a disoriented “JJ” can be heard telling another person in the recreational vehicle that  “I was just in bed right now, and I smelled certain parts of my body … [I was] in the other RV with Andy, and … the last thing I remember, we were on the phone with his fiancée … I smelled parts of myself and they smell like artificial smells.”

The streamer then alleged that he thought he had lotion or lube-like substance in his butt. Dick’s bail was later set at $25,000 according to jail records and he is supposed to appear in court on Friday. The investigation is still going on.

A String of Past Arrests This is not the first time that Andy Dick has faced an arrest. He was previously arrested three times for hitting partners with bottles, frying pans and chairs. Andy has been open about his eccentric behaviour and drug addiction. He is noted for his outlandish behaviour on several Comedy Central Roasts and other appearances.

Andy faced several sexual misconduct allegations too. His legal issues date back to 1999 when he was first questioned about the suicide of actor David Strickland.  In the same year, he pleaded guilty to the felony of cocaine possession and two other misdemeanour charges: cannabis possession and possession of a “smoking device”. He had to undergo a drug diversion program

In December 2004, Dick was arrested for indecent exposure at a local McDonald’s. In 2008, the controversial comedian was arrested in Murrieta, California on suspicion of drug possession and sexual battery. He exposed the breasts of a 17-year-old girl when he allegedly grabbed and pulled down her tank top and bra.

He was released after posting a $5000 bail. Dick was sentenced to three years of possession after he pleaded guilty to misdemeanour battery and marijuana possession and paid around $700 in fines. He was ordered to wear an alcohol-monitoring bracelet for a year. In 2010, Andy was again arrested at a bar in Huntington, West Virginia, on charges of sexual abuse after reportedly groping a bartender and a patron. He was released from jail after pleading not guilty and posting $60,000 bail.

In 2011, he was formally indicted by a Cabell County Grand Jury for two counts of first-degree sexual abuse. He received a not guilty plea, and the trial underwent several delays. Dick was finally given a six-months pre-trail diversion. Criminal charges were dismissed after he completed the six-month program. However, in 2012, Dick faced a civil suit filed by two victims.

In March 2018, Lena Sved obtained a restraining order against Dick requiring him to stay at least 100 yards from Sved and the couple’s children, Jacob and Meg, the order remaining in effect until March 13, 2023. In the same year, Andy pleaded not guilty to “misdemeanour battery and misdemeanour sexual battery” after groping a woman’s buttocks. In 2019, he was charged with groping a driver from a ride-hailing service. In 2021, he was arrested for hitting his boyfriend with a liquor bottle. Andy Dick is known for his indecent behaviour and destructive nature. Last month, he was mugged in Las Vegas and suffered severe facial injuries. He has, time and again, caused inconvenience for co-stars on the shows. Once, he was removed from the stage during an appearance on Jimmy Kimmel Live! for repeatedly touching Ivanka Trump.

The sad part is that he is always able to walk free despite facing severe charges. A series of arrests that span over a decade reflects that there has been no change in his actions or behaviour. Don’t you think, he should be jailed for what he did?