Salma Hayek surely knows to make her way through summer. The 55-year-old Eternals star may have been quiet for some time on social media but she made a firey comeback as she posted sizzling dancing pictures from a sailboat in a hot pink bikini with matching bottoms. Read on to learn about how Salma’s killing the heat. 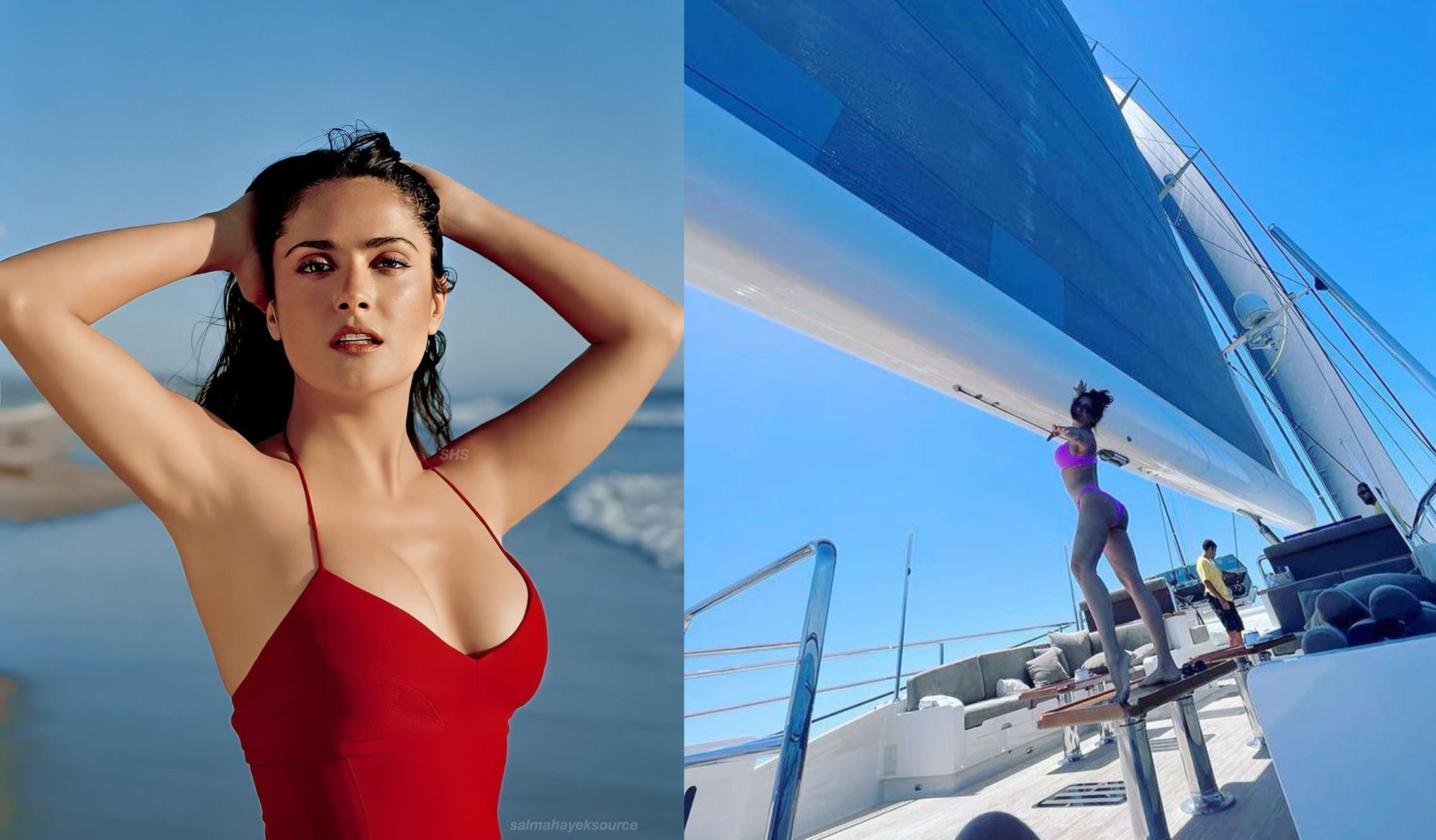 Daning on the Tables as I Sail…

The Mexican-American actress is anything but shy! The 55-year-old Salma Hayek is having the best time of her life as she flaunted her gorgeous curves in a hot-pink bikini. The “Eternals” star posted her “dancing on tables” sessions on Instagram as she kills summer on a sailboat.

The Golden Globe Award-winning actress’s post went up Tuesday as it featured Hayek in a hot pink bikini dancing on a table in the middle of a sailboat deck. Well, Hayek’s been taking some expensive trips lately with her billionaire husband.

Nevertheless, her post racked up almost 593K likes in less than 24 hours. Fans are going bonkers over her bikini pictures as Salma flaunts her perfect curves in it. Artist Youssef Nabil wrote, “So Beautiful !!! 💜💙💜💙💜.”  Actress Priyanka Chopra wrote, “Stunning 👏🔥.” Although a fan trolled, “She’s dancing on tables again. Quick, someone photoshop a snake around her!” Another fan wrote, “My role model. My biggest inspiration. Love from your Pakistani fangirl.” 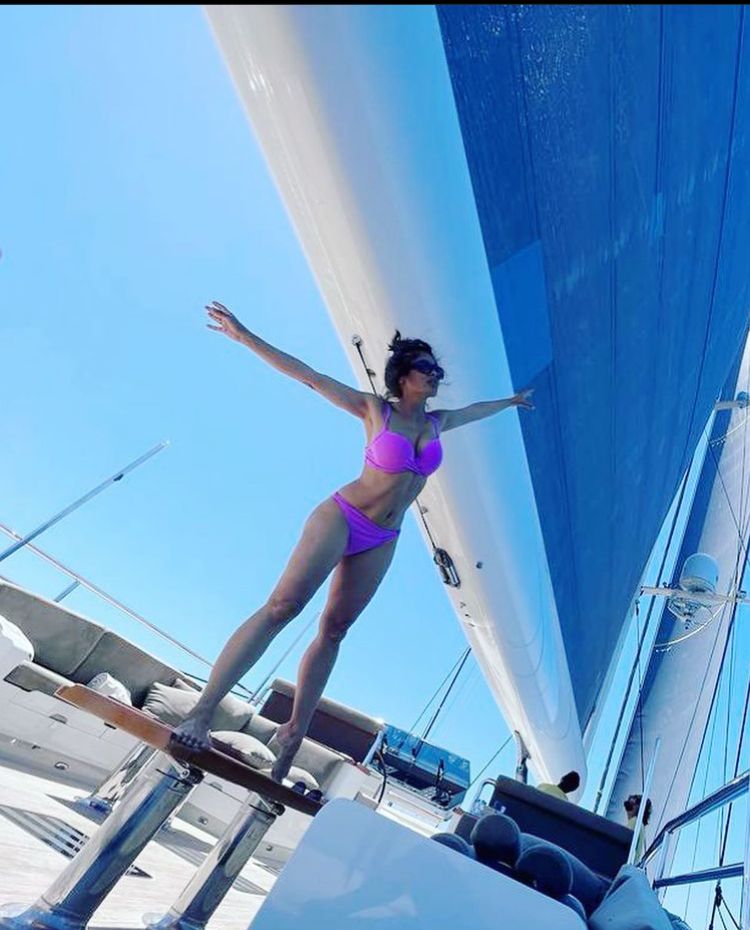 Well, Salma wasn’t alone in the picture. She was enjoying her sailing with her husband François-Henri Pinault, the French billionaire and CEO of Kering, which is a French luxury group known for brands like Gucci, Balenciaga and many others. So yea, a high-profile trip is like peanuts for Salma. 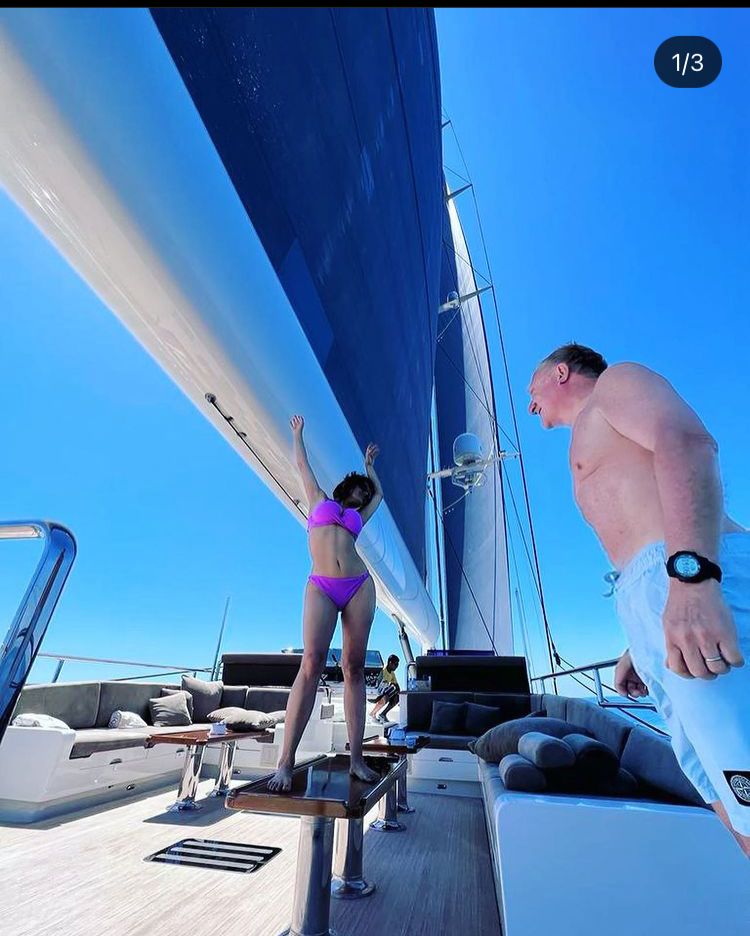 Salma has been married to her billionaire husband since 2009 and shares a child with him. Pinault’s net worth is estimated to be around $7 billion while Hayek’s net worth sits at  $200 million. Not to mention, the boat looks filthy expensive.

Well, as for her personal life, Salma Hayek is known for her extravagant lifestyle. Thanks to her billionaire husband. Previously, Salma posted a salsa video while attending a Marc Antony concert in London. The two appear to be good friends. Hayek is a successful director, producer and actress. She has several accolades for her performances and production of series and movies like “In the Time of Butterflies”, “The Maldonado Miracle” and “30 Rock”.

Salma Hayek is known for her role as the painter, Frida Kahlo in the biographical film Frida. She received an Academy Award for Best Actress nomination for her role in this film. As a public figure, she is celebrated as the world’s most beautiful woman by various outlets. Oh well, that we all agree to!

Salm’s last biggest project included her role as Ajak in the Marvel Cinematic Universe film “Eternals” which was released in 2021. The movie became her highest-grossing live-action film. Hayek has also worked with Procter & Gamble (disposable diaper sales) and UNICEF to promote the funding of vaccines against maternal and neonatal tetanus, a form of generalised tetanus that happens in newborns.

As for her bikini pictures, this is not the first time that she has flaunted her curves. In 2021, Hayek shared a slew of sexy swimwear pics on social media and said that she ain’t stopping any sooner. She lost a lot of weight and said, it is “liberating” to share such pictures with fans. Well, here she is! What do you think about her recent pictures?