Salma Hayek Demonstrates Gymnastic Skills By Flipping On The Trampoline

Salma Hayek is proving to those who doubted her that she is a competent and determined person who can achieve whatever her mind sets her to perform and make this a reality.

The actress from Mexico shared a clip where she is just demonstrating some of her draining activities involving trampolines and performing backflips. During The Outing, The Hollywood Star Is Having A Great Time

Salma Hayek recently shared a video of herself enjoying a trampoline session, and it’s already gone viral. The actress posted the video on her Instagram account with the caption, “My kids refused to go on the trampoline, I guess they thought they were too old for it, but I still love it.”

The video shows Salma Hayek jumping on a trampoline showing some backflips, with a big smile on her face. She is seen having fun and enjoying the moment, something we all need more these days. It is the sound of her family cheering her on in the background of the video, which we can hear while she is standing in the middle of a trampoline, and we can listen to her family cheer on her from a distance.

To help the actress jump higher, some security cords were put in place to help her with that. With khaki pants, a red vest, and a gray shirt with long sleeves, the actress is completely dressed up for an outing.

The comment section of the video was filled with comments from her fans and friends about how beautiful and glamorous she looked in this video. In addition, they said her video inspired them and that she had inspired many people through it.

With This Radiant And Rare Bare-Faced Pic Of Salma Hayek, She Is Cheering On The Year 2023

Salma Hayek has started the new year by showing the world how much she cares for herself. In an Instagram photo Hayek uploaded on January 1, she looked radiant without any makeup. 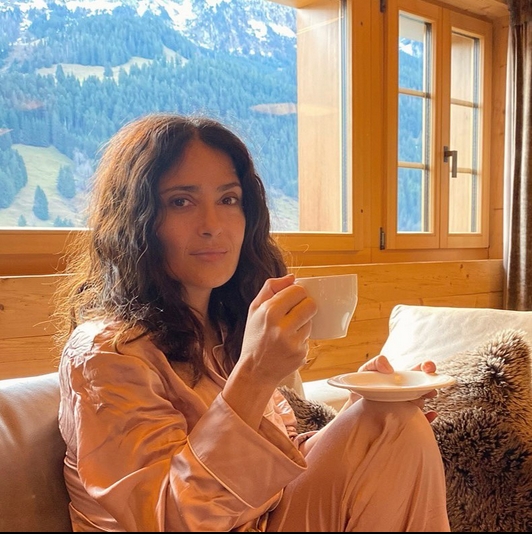 As she shared the picture with her caption in both English and Spanish, she wrote, “Good morning 🌞 2023. 🥳 happy new year to all of you wonderful people thank you for sharing your love, making me feel supported and many times making me laugh 😂 I always learn from all of you and I hope many blessings come your way in this new adventure 🙏🏼.”

She can be seen sipping tea from a white teacup and saucer set in the photograph, dressed in pink silk pajamas sure to make you gasp with amazement and admiration. In front of a picturesque mountain view behind her, she sits on her couch, showing off her bare face and naturally wavy hair for all to see while she rests her head on the couch.

There have been a few occasions in the past when Hayek has shared a selfie without makeup, showing off her beauty and confidence in an age where everything is edited and filtered.

A Brief Biography Of Salma Hayek

Spanish-Lebanese parents brought Salma Hayek into the world as a Mexican-American actress. Her parents were wealthy Mexican Roman Catholics. Watching Willy Wonka & the Chocolate Factory as a child inspired her to become an actress. After attending Mexico City’s Universidad Iberoamericana, she felt ready to enter the world of movies.

Upon arriving in Hollywood, she starred in the movie ‘Desperado’ opposite Antonio Banderas. She has also appeared in ‘Fools Rush In’ and ‘Wild Wild West’ among others. In ‘Once Upon a Time in Mexico,’ she reprised her role as ‘Desperado’ and later formed her own production company. 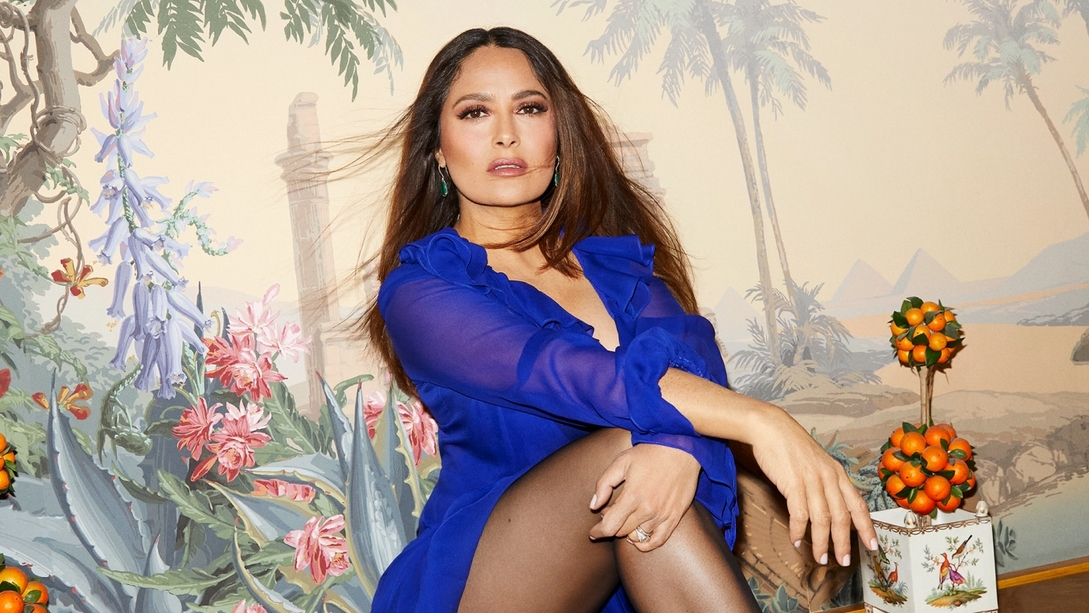 As a producer, she is best known for her Mexican film ‘El Coronel No Tiene Quien Le Escriba,’ which became Mexico’s Oscar entry in the outstanding foreign film category. In addition, during the 59th Primetime Emmy Awards, she was nominated for ‘Outstanding Guest Actress in a Comedy Series’ for her guest role as Sofia Reyes in ‘Ugly Betty.’

She has endorsed Revlon and Avon product lines and launched her hair and skin care products brand. In addition, she has taken part in fundraising for maternal and neonatal tetanus vaccines.

It’s clear from the video that Hayek understands how important it is to take time out for yourself and have some fun. Her video is an inspiring reminder for us all to make time for activities that bring us joy, even if it’s something as simple as jumping on a trampoline. Has she inspired you in any way? Feel free to share your thoughts in the comments section below.