Lilly Collins might have won the cutest costume this Halloween. The American and British actress dressed up as a cute avocado! 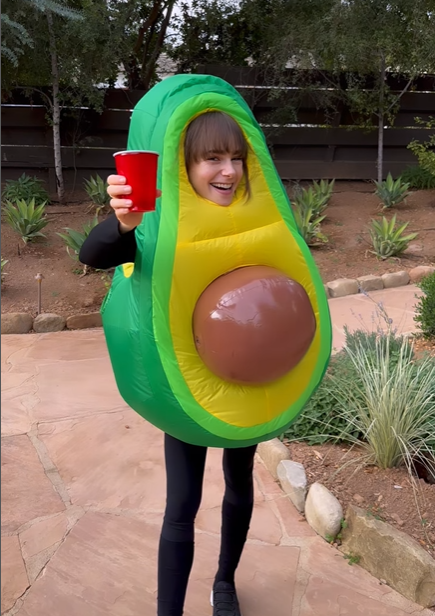 While most people dressed up as their favorite movie characters, Collins chose to be a fruit instead (yes, avocados are fruit, not vegetables). Since avocado became trendy as a healthy alternative a few years ago, it has become a lot of people’s favorite go-to snack, best combined with either bread or chips in the form of a dip.

But avocados tend to split people up, it is either loved by them or despised of. Whether you love avocados or hate them, you cannot help but love Collin’s costume this year.

The actress dressed up as her favorite fruit! She posted an adorable video of herself saying “Cheers!” and captioned it “Cheers to my favorite snack, avocado toast. Get it?? I’m sorry and you’re welcome! Happy Halloween!…”

The idea was certainly loved by her followers as the video has garnered over 642,000 likes in under 8 hours.

A person commented on the post “You’ve done a lot of incredible work in your life Lils… but this may take the cake for me”. That comment got over 200 likes.

Quite a few comments wondered whether she was pregnant. This might be because the seed of the avocado seemed like Collin’s belly, but it might be nothing. If more people continue to believe that she is pregnant, she may have to comment on it.

Collin was born to Phil Collin and his second wife Jill Tavelman. She is the half-sister of Simon Collins and Joey Collins from her father’s previous marriage.

Collin was academically gifted. She graduated from Harvard-Westlake School and went to the University of Southern California where she majored in broadcast journalism.

But Collins’s passion was to act, she had been acting from the age of 2 years when she starred in BBC’s Growing Pairs.

She went on to act in many noticeable roles including The Blind Side, Mirror Mirror, Stuck In Love, Love, Rosie, etc. Her role in Rules Don’t Apply in 2016 gained her a lot of critical appreciation. She even got nominated for the prestigious Golden Globe Award for Best Actress- Motion Picture or Comedy.

She also got nominated for her role of an adult with anorexia in the Netflix drama To The Bone. She went on to do successful biographical movies like Extremely Wicked, Shockingly Evil and Vile, and Tolkein. These roles got her nominated for the Academy Awards over 10 times.

Although she may not have won the awards, she did win people’s hearts. She currently stars in the famous Emily in Paris. She has over 26 million followers on her Instagram. The England native also wrote a book Unfiltered: No Shame, No Regrets, Just Me where she talked about her mental health struggles, including an eating disorder.

Recently she posted a fringe look on Instagram that got a lot of people talking. Bella Hadid has also been sporting a similar look making people wonder if fringe is back in style.