Kate Walsh spreads awareness about World Ocean Day by posting a picture on her social media as she swims in the ocean along with the underwater life. 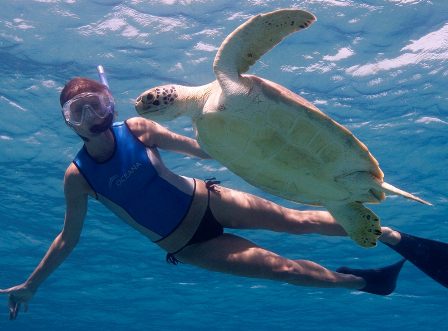 Kate poses in a bikini amidst the ocean waters to make people aware of the ocean health on World Oceans day and wishes her fans and followings a Happy World Oceans Day.

“Happy #WorldOceansDay my loves! 🐳 🐠 🦈 Today we celebrate our oceans & recognize the role we all play in protecting our precious planet 🌎”

Kate further emphasises the importance of protecting our oceans by saying “Facing major threats from plastic pollution to climate change, our oceans need our help now!” She also expresses how she working towards this goal of protecting the oceans “I’ve always been so proud to work with @Oceana, which has worked to protect over 4.5 million square miles of the ocean! 💙”

Kate even asks for people to support this movement and to “Check out the link in both of our bios to donate to #StandForOceans, and your gift will be doubled thanks to their generous partner @Dropps!”

The Emily in Paris actress also posted pictures of herself scuba diving alongside turtles and fishes in the ocean waters.

Oceans is an organisation which is dedicated to protecting and restoring the world’s oceans on a global scale and while spreading her message on this day, Kate mentions Oceana and their initiative.

Oceana is a special organisation which was established to restore the health of oceans all over the world before its inception no such organisation existed. This was created to fill a gap and the founders of Oceana clearly defined it as “an international organization focused solely on oceans, dedicated to achieving measurable change by conducting specific, science-based policy campaigns with fixed deadlines and articulated goals.”

“Growing up in northern California, Walsh spent a lot of time at the beach, and as a kid, she thought she might grow up to be a marine biologist. Her involvement with Oceana grew out of her natural affinity for the oceans.” this is how she became associated with the initiative.

In 2009 as well the actress travelled with Oceana and swam along with the sea turtles while spreading awareness of the threats faced by sea turtles, Here is a video of the same-

“It is time to realize that, to achieve the Sustainable Development Goals and the objectives of the Paris Agreement on climate change, we urgently need collective action to revitalize the ocean. That means finding a new balance in our relationship with the marine environment.” We need to protect the oceans from unwanted plastics and degradation.

Kate Walsh’s love for oceans and preserving them has been evolving since her childhood and the Grey’s Anatomy star has been associated with Oceana to do all it takes to spread awareness.