The Grammy Award-winning rapper Doja Cat’s looks at Coachella 2022 is all that fans are talking about! And why not? The “Say So” star thrilled a crowd of more than 760,000 people with her multiple looks.

Doja wants to leave her mark, not just by her performance but also by her out-of-the-world outfits during her performances for two weekends at the Coachella Music Festival. Peep through her outfits that transported fans to another planet. I start by complementing the man who created Doja’s out-of-the-world looks at this year’s Coachella. Brett Alan Nelson, Doja Cat’s creative director said, “Before I could create her wardrobe, I had to build the world around it.” Well, that’s exactly what he did!

Wondering the concept behind Doja’s stunning looks during her Coachella performance? Brett explains it best. Brett said,  “We started with this African dystopian fairy theme, then (we) tapped into a hypnotic section. Next, we explored beauty, seduction and heartache, before the finale: God mode, a punk rock-inspired aesthetic done our way.”

Celebrity creative director, Brett is a Swarovski fan and ensured that Doja accompanies the right level of modernity and freshness with these out-of-the-world looks. He said, “For the jewellery element, Swarovski made for the perfect partner.

“I’m a huge fan of Swarovski because they’re unafraid to push boundaries. Both Doja and I loved the ice-blue stone necklace as it looked like an art piece, rather than just a neckpiece. The flame hue spike earrings added the right level of modernity and freshness, which worked with all of the wardrobe changes and fit into ‘Planet Her’.”

Doja performed some of her best hits during Weekend one and two of Coachella in front of a crowd of more than 70,000 attendees. From performing alongside Tyga on their hit “Juicy” to performing alongside Rico Nasty, Doja has been the real stunner when it comes to outfits. Read on to know about her looks.

On Weekend one, Doja flaunted her curves in a purple and black bra, a studded leather harness and a tiny miniskirt that had blue flames. It added more appeal to her sexy and sharp dance moves. 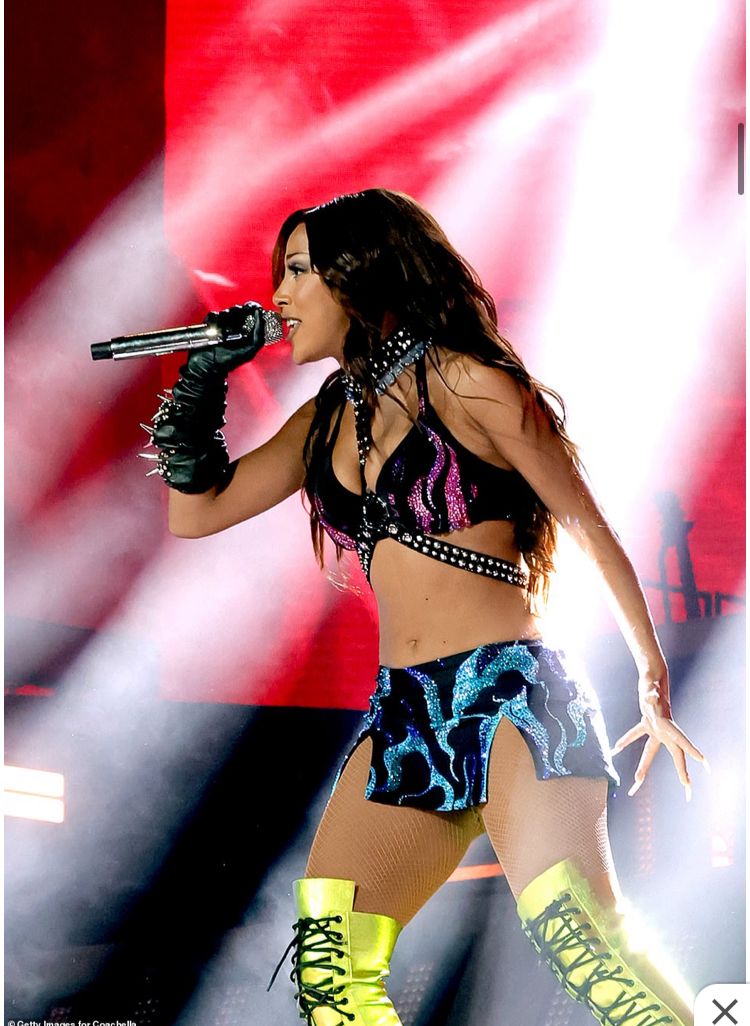 The Kiss Me More rapper complimented this look with thigh-high neon yellow boots with black laces and a single elbow-length glove. Guess what, Doja didn’t wasn’t done stunning us. She next slipped on in a daring black and white striped crop top and similar print trousers. 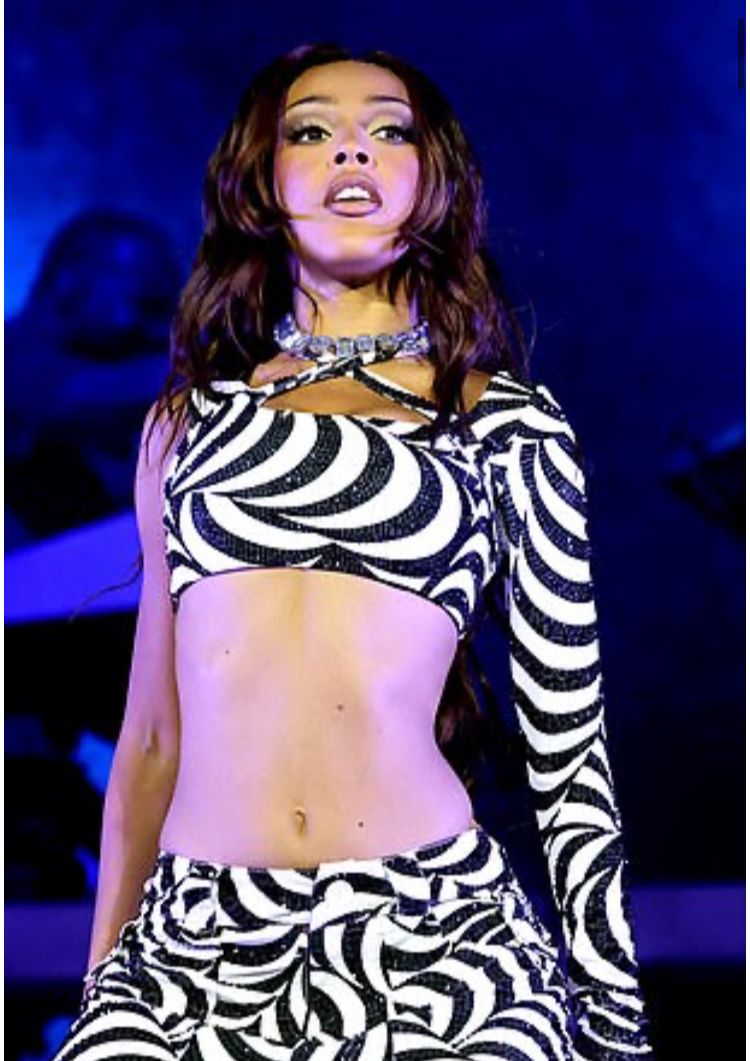 Doja’s dancers were also wearing a similar print outfit along with red sunglasses. In the meantime, she also found time to slip into a plunging light blue leotard over a black push-up. Her nude fishnet stocking added more sex appeal to her look. 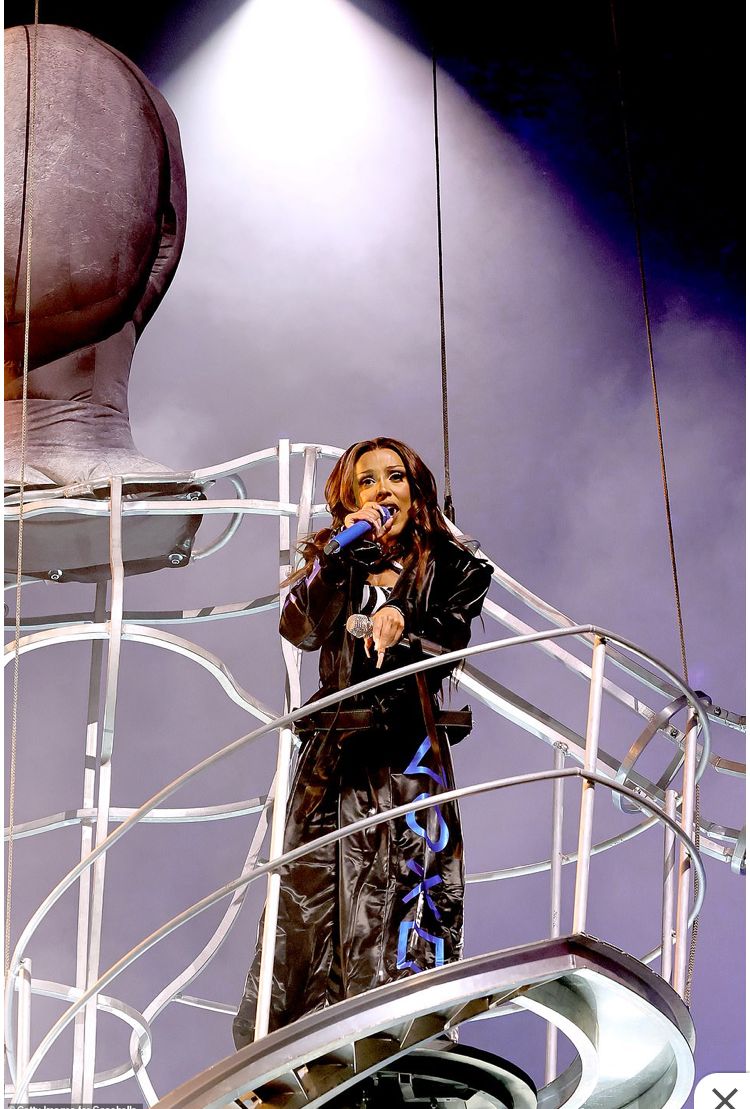 Doja Cat also stunned her fans in a sparkling bodysuit as she made fans groove on her hit tracks ‘Woman‘ and ‘Vegas‘. She also wore a trippy green and yellow animal print skirt with slits along with a black bra. Doja added one black glove to the custom Roberto Cavalli outfit with large silver studs. She also wore thigh-high chunky boots with a black platform that added 3-inches to her height. Nelson worked closely with Dolce & Gabbana to provide the glitziest appearance to Doja with a Black bodysuit. The theme was punk, rock and rave. In addition to this, the stage props were lit. She was seen singing on the silver stairs as she flaunted her classy leather coat over the sexy striped dress. Doja’s quick transformation in these vibrant outfits without even losing her energy took the fans by surprise. 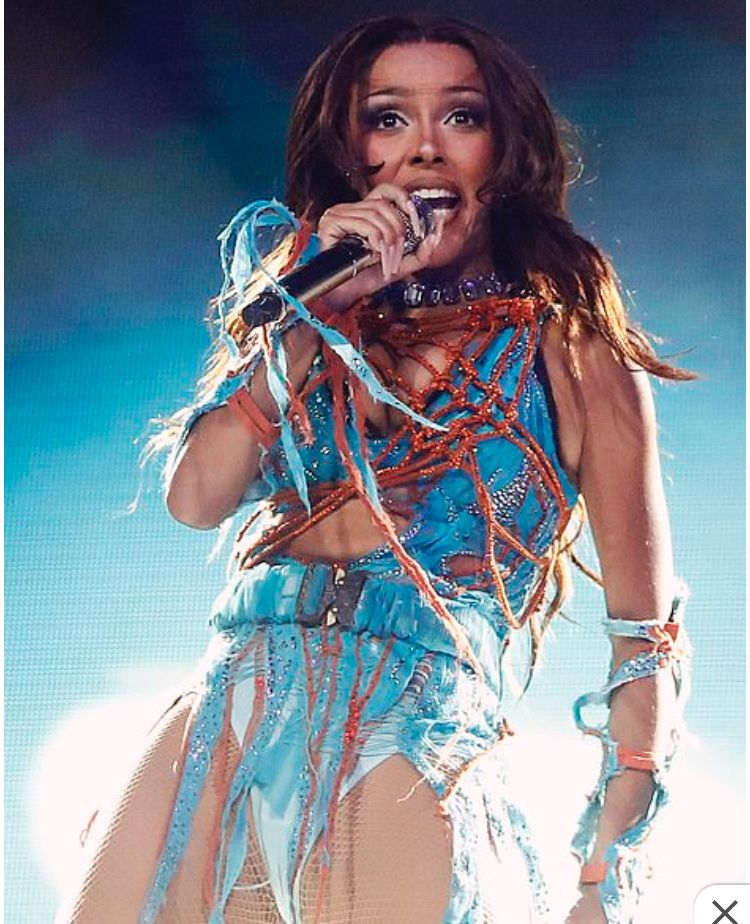 Fna couldn’t keep their eyes off Doja as she appeared in her distressed blue outfit. I must confess, this one appears to be her best look from the stunning festival. The trippy colours added so much life to her performance.

The outfit was a perfect combination of orange and blue flames. She even performed “Juicy” alongside Tyga in this look. At one point, she flexed her toned muscles. Doja’s outfit. The nude fishnet added glamour to her look. 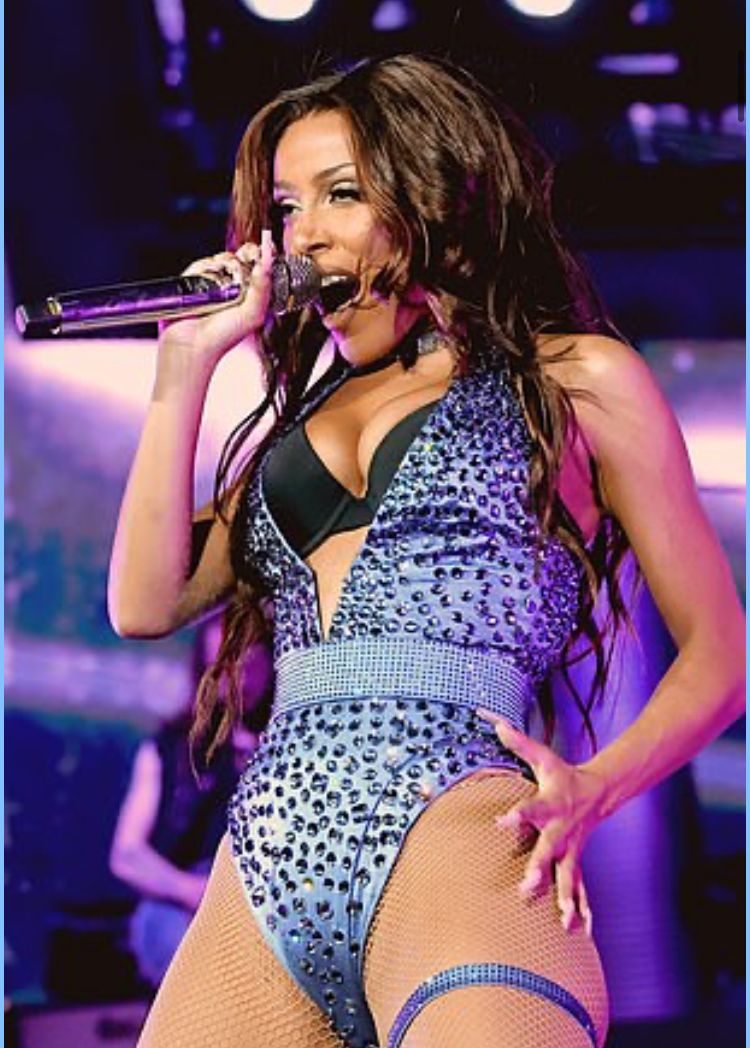 On the first weekend, Doja paused her Coachella performance, but the motive behind it was to remind the crowd of believing in themselves. She discouraged the crowd from quitting. Now, that’s big because the star herself spoke about retiring from music.

She said, Coachella, don’t give up. Don’t quit. Believe in yourself. I love you,” she told the crowd in Indio, California, which included Insider’s music team. The 26-year-old rapper pledged to stop making music after receiving criticism for not greeting fans in Paraguay.

She also said, “I’m not bailing. But me not bailing doesn’t mean my ass isn’t gonna disappear right after,” she wrote in a series of since-deleted tweets. “I still got shit I gotta do. and a lot of y’all think cuz I post a fuckin picture it means I’m not out. Pic doesn’t = music GOOFY.”

Now, fans speculate that Doja has a change of heart, but isn’t that good news? Who wouldn’t want to see Doja stunning the crowd with her unique dressing and power-packed performances for the years to come. 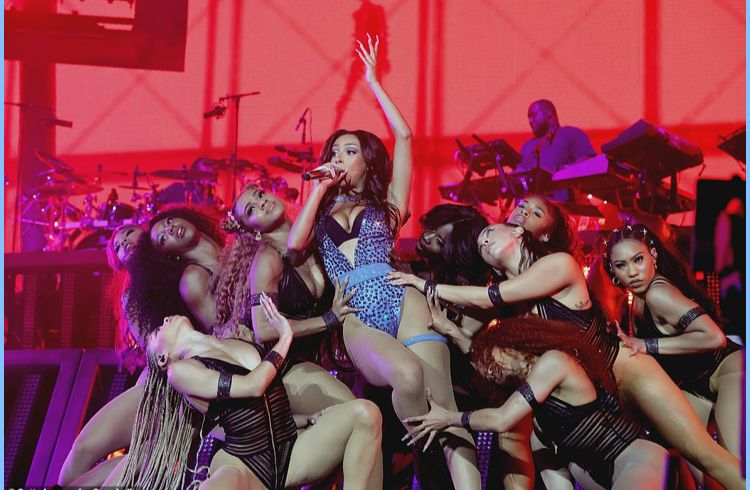 Coming back to her looks at this year’s Coachella, Doja has convinced her fans that she is a complete package of out-of-the-world dressing sense just like her quirky humour. Doja’s creative team has worked hard to create “another planet” that aligns with the very thought behind creating these looks. What do you think?