Chris Evans is an American actor who has starred in movies and tv series. He is most popularly known for playing Captain America in Avengers movies. Chris recently took to Instagram to share his new look.

Chris Evans Posts Before & After Look

Chris posted a before and after look on Instagram. He shaved off his mustache that he kept for his upcoming movie. Chris simply captioned the picture “Before and after #thegrayman and #lloydhansen.” The picture already has over 2.5 million likes. One user commented, “Are you from NASA? Because you are out of this world”.

Previously, Chris posted a few pictures from the shooting of the film. In this picture, he can be seen with the mustache. He posed for the selfie with a smile and a bloody face and captioned it “Long day at the office #thegrayman #fbf #lloydhansen”.

The mustache was certainly the center of attention. Jamie Chung commented, “his mustache has its own credit in the movie right?”. Another user simply commented “MUSTACHE”.

The retro facial hairstyle peaked a lot of people’s interest in his role and the movie. The movie is Netflix’s upcoming spy thriller called The Gray Man. Chris plays the role of Lloyd Hansen, a CIA agent who is also the villain. Ryan Reynolds plays Court Gentry, a CIA agent who discovers some dark secrets. After that, Hansen puts a bounty on Gentry’s head. They were former colleagues who are now after each other’s lives. This role will be a contrast to the superhero role that Chris is most popularly known for.

The movie is packed with big names like Rege-Jean Page along with Ana de Armas. It will be released on Netflix on July 15th. The film is co-directed by Avengers colleagues Anthony and Joe Russo.

Talking about the movie, Anthony told Deadline “The movie is a real mano a mano between those two great actors, who represent two different versions of the CIA, in what it can be, and what it can do. For those who were fans of Captain America: Winter Soldier, this is us moving into that territory in more of a real-world setting. That’s what this movie really means for us.”

It seems like the film has been shot completely and therefore Chris can go back to his casual clean-shaven look.

Drastic changes are made to an actor’s appearance to make the character distinctive and more real for the audience. This is not the first time that Chris has been through facial transformation for a movie.

In 2018, he sported a mustache for his Broadway debut in Lobby Hero. In the Broadway show, he played the role of a policeman. Talking about facial hair, Chris said, “People don’t recognize me at all” to the New York Times. He also added that “I can look them right in the eye-its like I am invisible”. 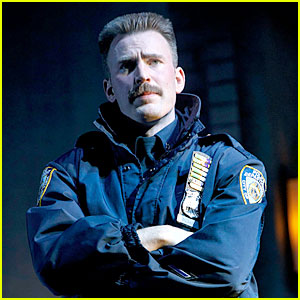 People might not recognize Chris with facial hair. This might be because most of his roles as Captain America showed him in a clean-shaven look. In his personal life also, he prefers to be clean-shaven. This is why people might recognize him easily when he would step out and cannot spot him in a different facial look.