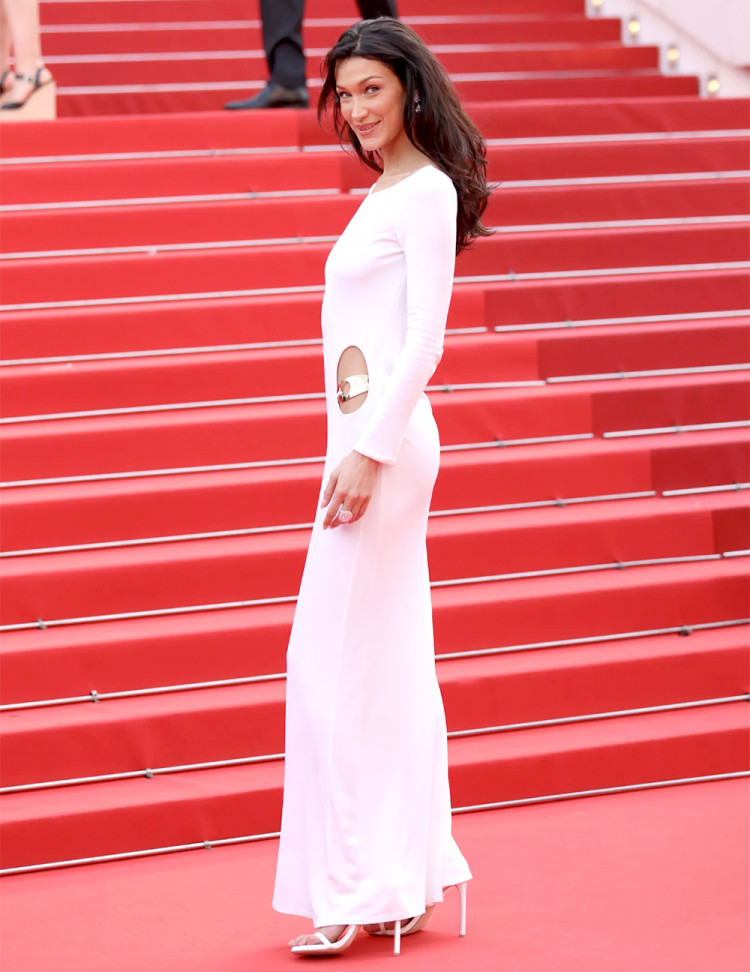 The 25-year-old model has been styling herself for a few years now. She says it brought her a lot of confidence and lowered anxiety regarding people’s opinions.

On May 26th, Hadid wore a long-sleeved vintage dress at Palais des Festivals in Cannes, France. For the hyped-up appearance at Cannes, she teamed up with Law Roach. He has previously styled stares like Zendaya.

Law Roach uses a lot of rare and covetable vintage, and that is exactly what he did with Bella Hadid.

The elegant white dress is a piece from the two years that Tom Ford spent at Gucci’s. It is a part of the 1996 collection that combines Elsa Prett’s sculptural jewelry perfectly with Halston’s minimalism. The white dress featured a keyhole on the hip that showcases a matching G-string with a loop. Hadid did justice to the look over 26 years after Carolyn Murphy wore it on a runway. Hadid wore it to attend the screening of Hirokazu Kore-eda’s Broker. She completed the look with light makeup, untied hair, mini earrings, and flats.

Apart from the white gown, Bella Hadid also dressed in a sleek black gown from Versace’s spring collection in 1987. The black gown had ruffle/peplum details around the waist. It worked splendidly to give some volume around the waist. The off-shoulder dress looked beautiful on Hadid. She wore it to the premiere of The Innocent by Louis Garrel. 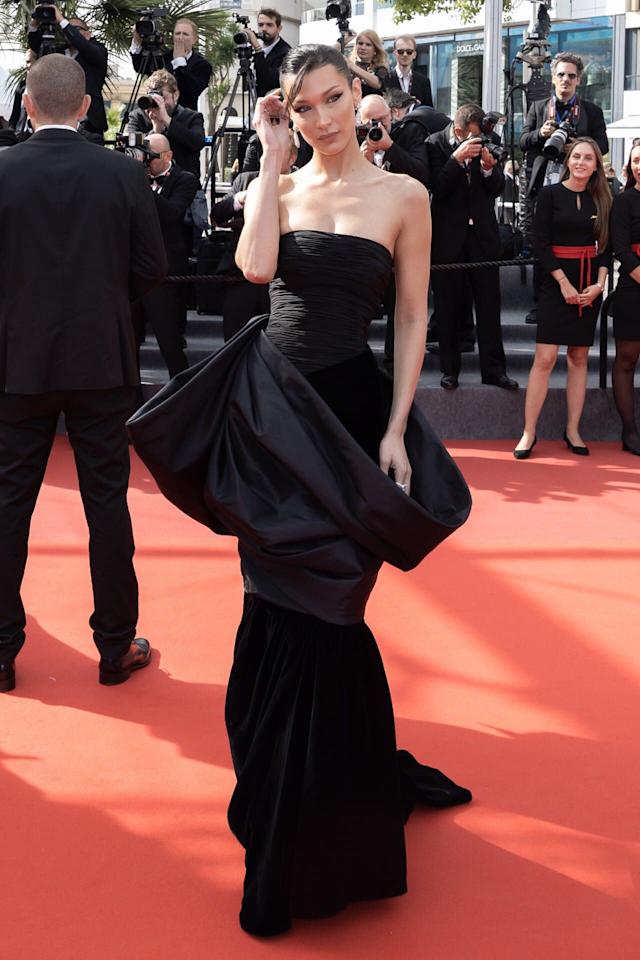 Talking about the dress, she posted two pictures on Instagram. In one of them, she hoped to make Donatella and Gianni proud of her. She captioned the other picture “Gianni Versace designed this dress in 1987. It is an honor for @donatella_versace to lend this to me for such an important night…: the 75th anniversary of the brilliant festival… Celebrating film and watching/listening/feeling the mutual respect of every person that makes it go round is consistently a highlight of my life ….”

The body-hugging gown gave her a mermaid silhouette look. The drape around the waist is tied back in the shape of a bow. According to Vogue, the gown was made originally for the Teatro alla Scala production of the opera ‘Salome’ in 1987.

This was her first appearance at Cannes this year. She accessorized with Chopard drop earrings, pointed-toe pumps, and rings.

After dinner, Hadid did a quick dress change and grabbed people’s attention with her a black sultry gown. The gown was from the 2001 fall ready-to-wear collection. 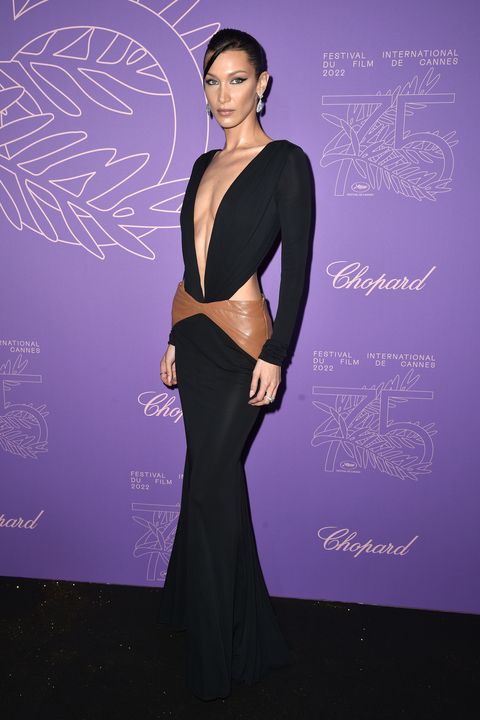 The gown had a neckline that went down to her waist and hips. The cuts went into the light brown leather section of the dress that set the gown apart from all others. Hadid complemented the look with diamond earrings, tied-up hair in the back and dewy makeup.

Hadid also donned on a Chanel gown, a timeless classic combination from 1986. It comes from Karl Lagerfeld’s archives. The strapless gown had a white rose on the chest with a velvet bodice. It also had detachable puffed sleeves with stripes similar to the flared full-length that she wore. Hadid completed the look with a gelled ponytail, dewy makeup and a regal necklace.

Although the internet is busy gushing over how pretty Hadid looked, there are conversations in the background about not giving credit to the right people.

Some fans were upset that Hadid and Roach did not give any credit to the people who brought the look together. Digital activist and fashion creator Kim Russel posted the picture of the 2001 Versace fall look last month.

Hadid liked the post and also commented on it. So when Hadid wore the dress at Cannes, some people got upset that Russel was not credited for it. Roach and Russel also fought online along with the fans.

However, later Russel took to Instagram to set the record straight. She admitted that it was stupid of her to go “Instagram instead of going to [Hadid or Roach] directly.” She came to know that Hadid and Roach were presented with several options and the Versace one happened to be one of them, therefore the credit could not be given to Russel.

She apologized by saying “Huge apologies to both” and also added that “Nobody set out to intentionally hurt or snub me.”

Bella Hadid is a successful American model. The 25-year-old is the younger sister of Gigi Hadid, who is also a model. In 2016, Bella Hadid was voted ‘Model of the Year’. So far, she has appeared on 27 magazine covers for Vogue. She is best friends with Hailey Bieber, Justin Bieber’s wife and fellow model.

She is also close with Kendal Jenner, the Kardashian clan’s younger sister who is also a model.

As a kid, Hadid had dreams of competing in the 2016 Olympics in Rio de Janeiro. However, she could not follow through after she was diagnosed with a chronic Lyme disease in 2013. Her mother and brother also suffer from the same disease. However, it was not announced to the world until 2015. She made her first appearance at Cannes in 2016. Hadid is also outspoken about the causes she believes in. She is half Palestinian and half Dutch and frequently speaks up for their cause. While most celebrities remain silent on such issues, Hadid recently called out Israeli forces for the violence against Palestinians in Al-Aqsa Mosque.

She also joined the march for solidary with Palestine last year. Hadid claims that she gets shadow-banned by Instagram whenever she tires to raise awareness about Palestine.

In one of her posts, she wrote “I will continue to come forward with peace, showing factual information about how the [Israel Defense Forces], Israeli government and Settlers attack innocent Palestinians for no reason, except for simply being Palestinian.”

She continues her activism along with her modeling career. A good outline of this can be seen on her Instagram account.