If you believe that the Oscars are solely about celebrities receiving awards for their hard work, yeah you are halfway correct, but the other most important thing that fans and reporters notice first is how the celebrities are dressed. 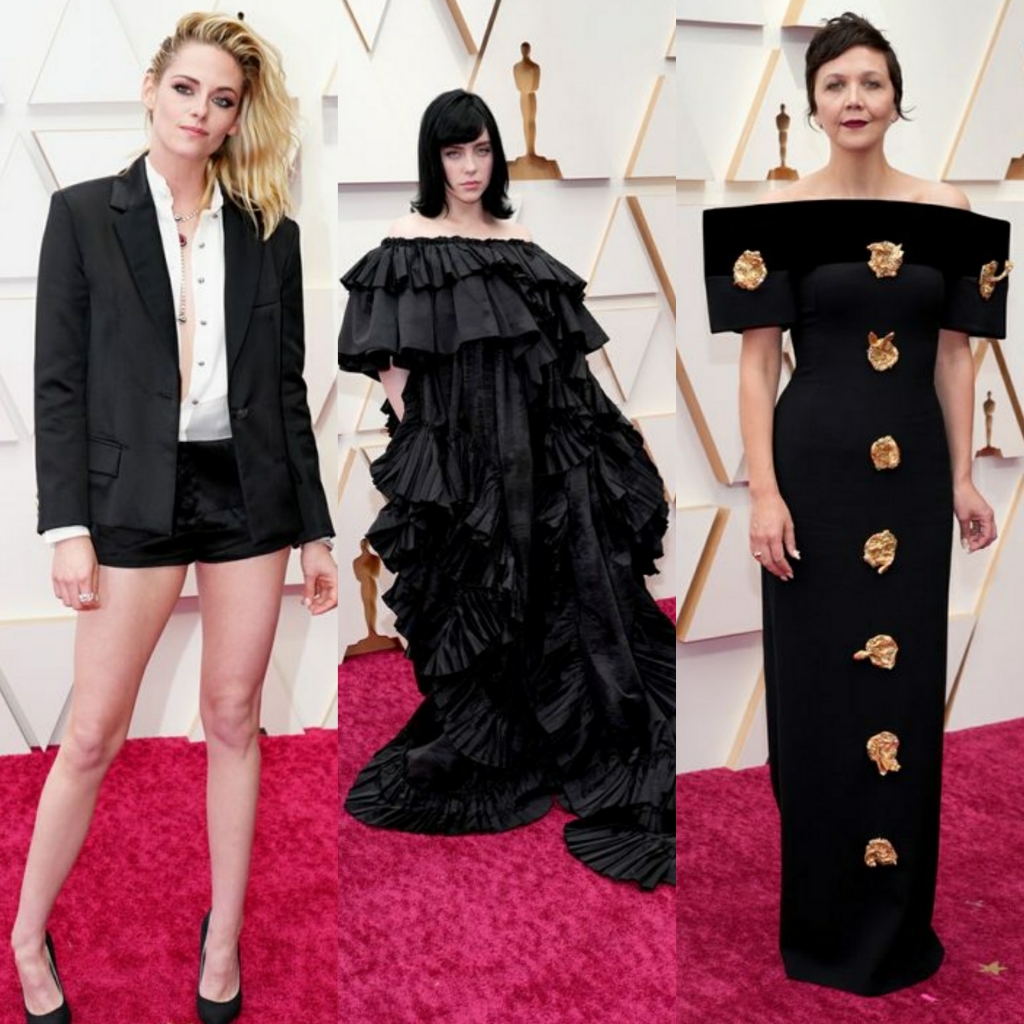 We understand that the Oscars are about wearing unique outfits, and we can’t point out the worst outfits because every star donned lovely attires.

However, according to us at the Oscars 2022, some donned out-of-style or, to put it another way, odd-looking outfits.

Are we being a bit dramatic about the 94th Academy Awards? Okay, yes. But can you blame us? While some dressed to impress, others drew our attention for all the wrong reasons.

People always focus on who’s the best dressed but not on those who are the worst dressed. Looks like Oscars 2022 has their worst Outfit list too, just like the previous ones.

Read on for the worst dressed of this year’s Academy Awards.

Top 10 Worst Looks from the Oscars

Are you ready to dig into it? Everyone has their own opinion but looks like a lot of individuals didn’t like the outfit worn by the following celebrities.

The Twilight actress seems to be not in a good mood for dressing up for the Oscars 2022. The actress, who was nominated for best actress for her role as Princess Diana in Pablo Larrain’s Spencer, wore super-short shorts along with a formal blazer. 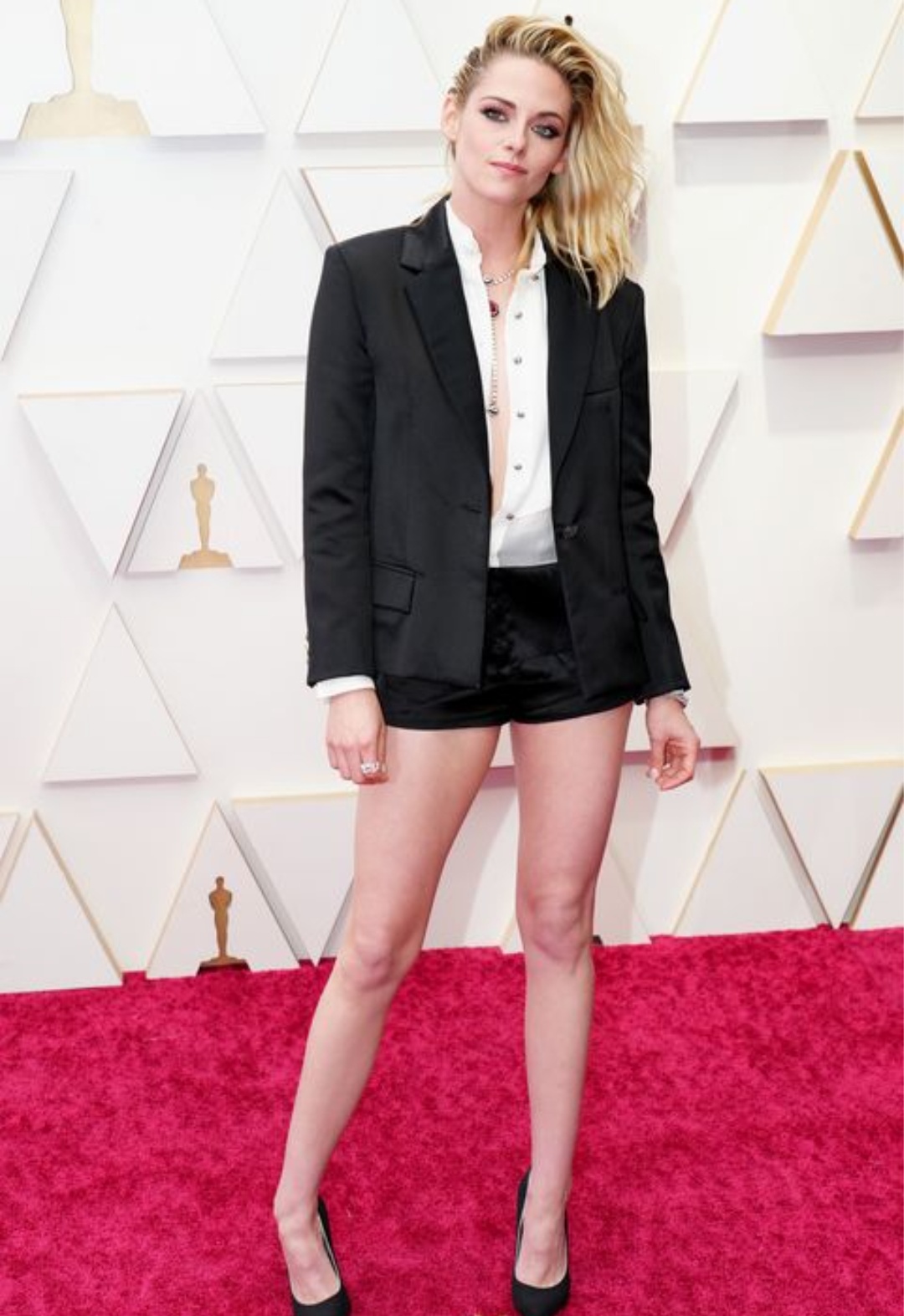 Instead of the 94th Academy Awards, this attire should have looked better for formal interviews.

In terms of her hairstyle, we believe it clashes with her outfit, thus her hair indicates, “I tried.”

A 20-year-old singer was similarly dressed in a Gucci ruffled black bespoke gown.

Billie Eilish is clearly a stylish force to be reckoned with, as evidenced by her red carpet appearances. 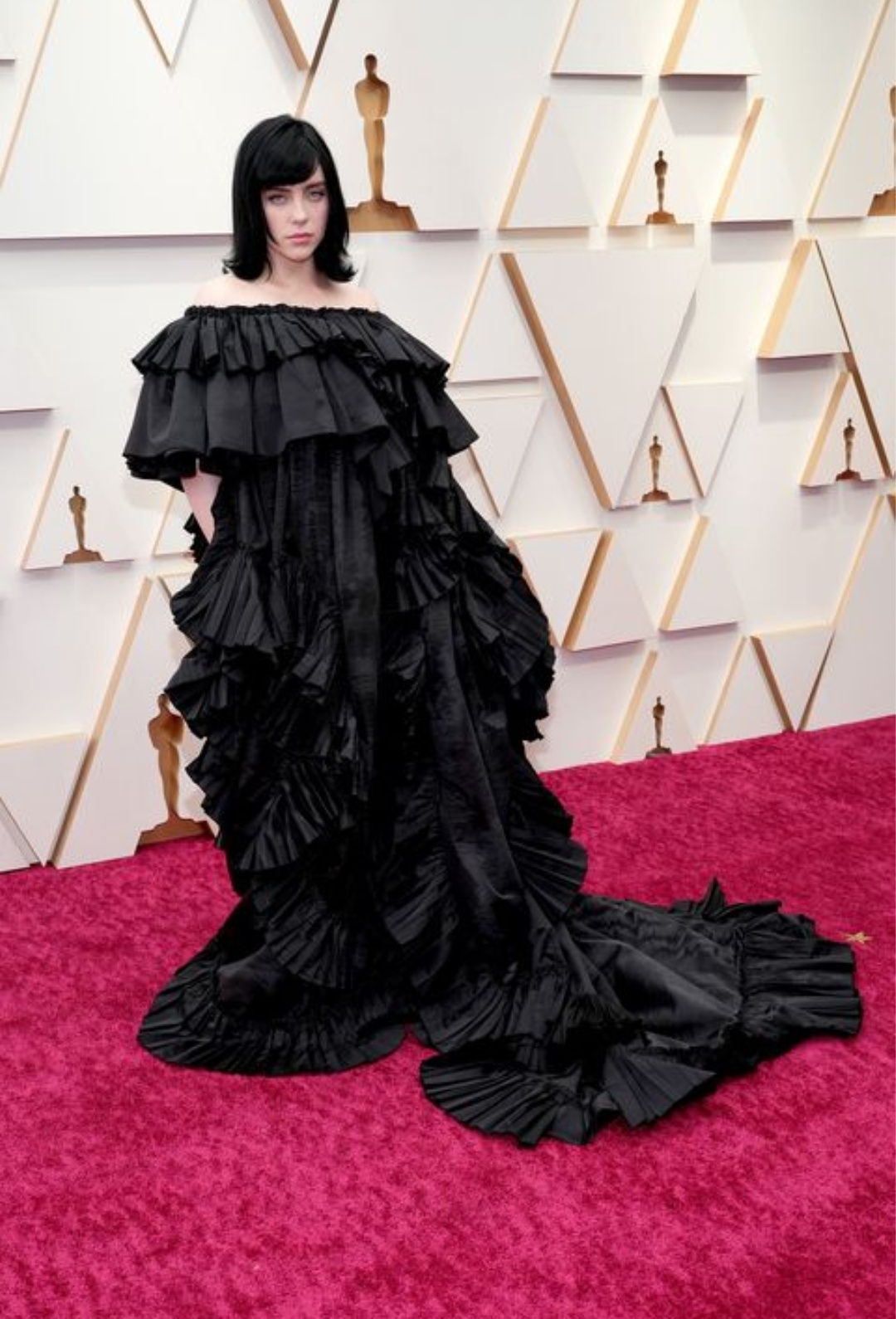 Hype-y trainers, streetwear and anime influences, and enormous, baggy fits are all part of the singer’s unique style.

However, Billie Eilish’s lack of structure on her off-the-shoulder gown didn’t look nearly tidy this time on the red carpet of Oscars 2022.

In brief, the gown’s layers are joined in an odd way, making it appear unsuitable and out of place for Billie.

She oozes her own unique blend of grown-up, kooky cool on every occasion – be it on the Oscar red carpet or shopping downtown.

She has an admirable eye for fashion but doesn’t obsess over what she wears, she loves designers but isn’t a shopaholic, and she exudes her own unique blend of grown-up, kooky cool on every occasion. Jealous? Yes, we are. 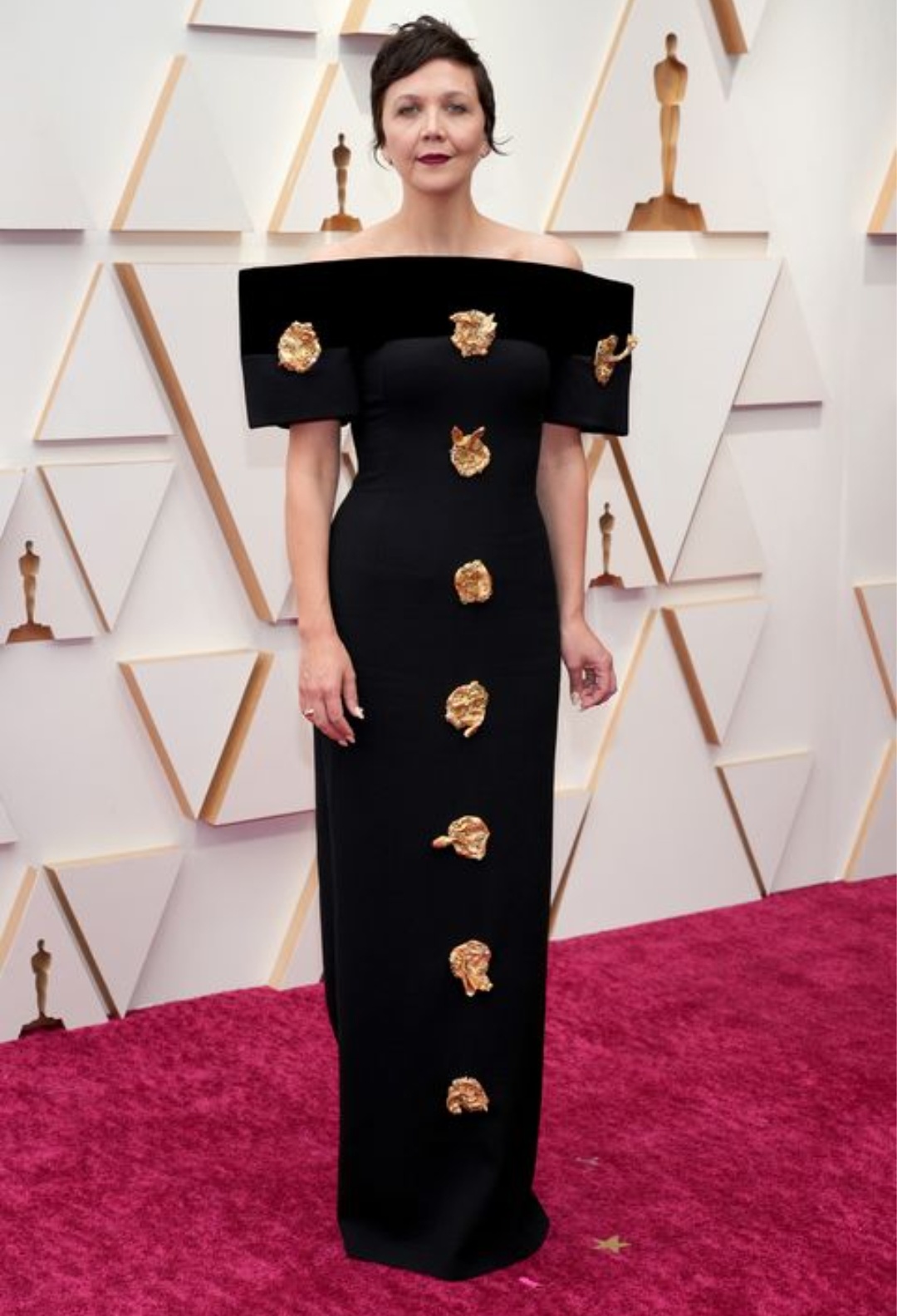 But in the Oscars 2022, Maggie’s sense of style seems to be totally demolished. As Maggie wore an avant-garde Schiaparelli gown with intricate gold accents.

Her attire on the sides of her shoulders resembles a straight board, which definitely seems to look like a not-to-go-to outfit for a big event like this.

As if a Manolo Blahnik pump or a new Telfar bag is what motivates them to get out of bed in the morning. Tracee Ellis Ross, the beloved Girlfriends actress, is a prime example of the latter. 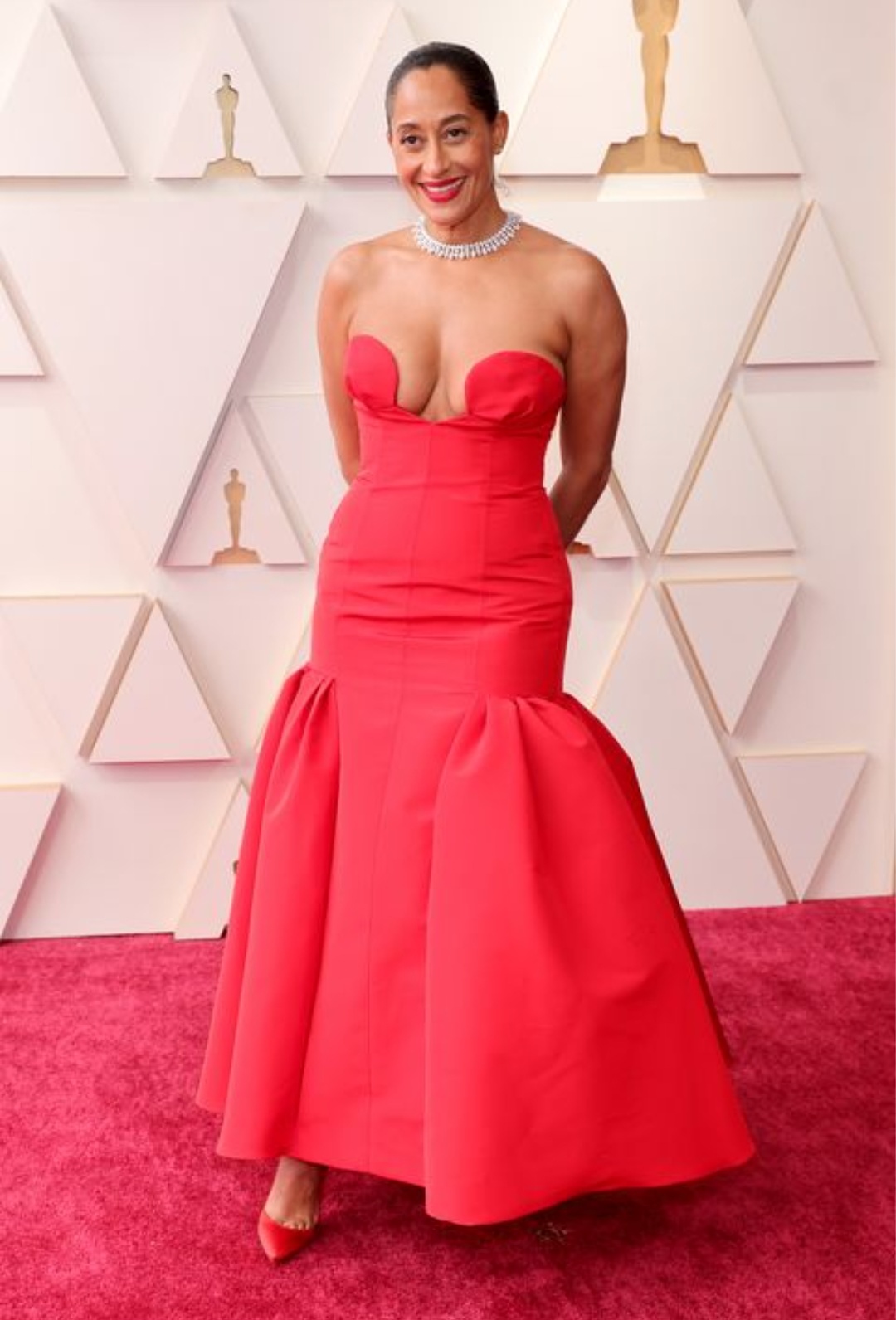 I believe we can all agree that Ross is the epitome of a current fashion icon, however, some may argue that the word “fashion icon” is overused these days, and they may be correct for Traces this time.

We will say only one phrase; this clothing doesn’t seem to be appropriate for any occasion.

Julia Vernon, a British cosmetics artist, wore an ensemble that drew a lot of attention as she walked the red carpet.

She didn’t look like she was attired for the biggest night in the entertainment industry, wearing a grey-tiered and puffy top that looked like a large loofah, skin-tight leather leggings, and hefty boots.

This outfit appears to be a fairy or angel sort of. 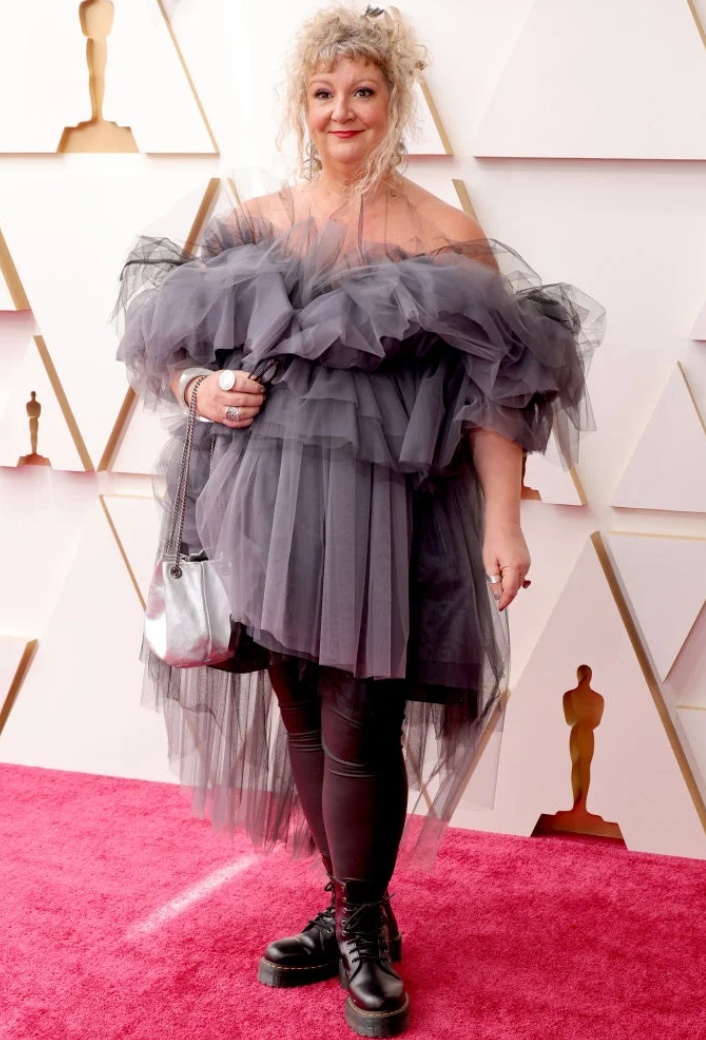 To be honest, everyone wore dresses like these to their childhood birthday parties, and we all know that for the Oscars the greatest outfits should be designed and chosen.

Sheila, the drumming queen, may have been more concerned with how to accept the trophy instead of her dress. She completed the look with a full-sleeved sparkly grey top, with common grey heals and earrings. 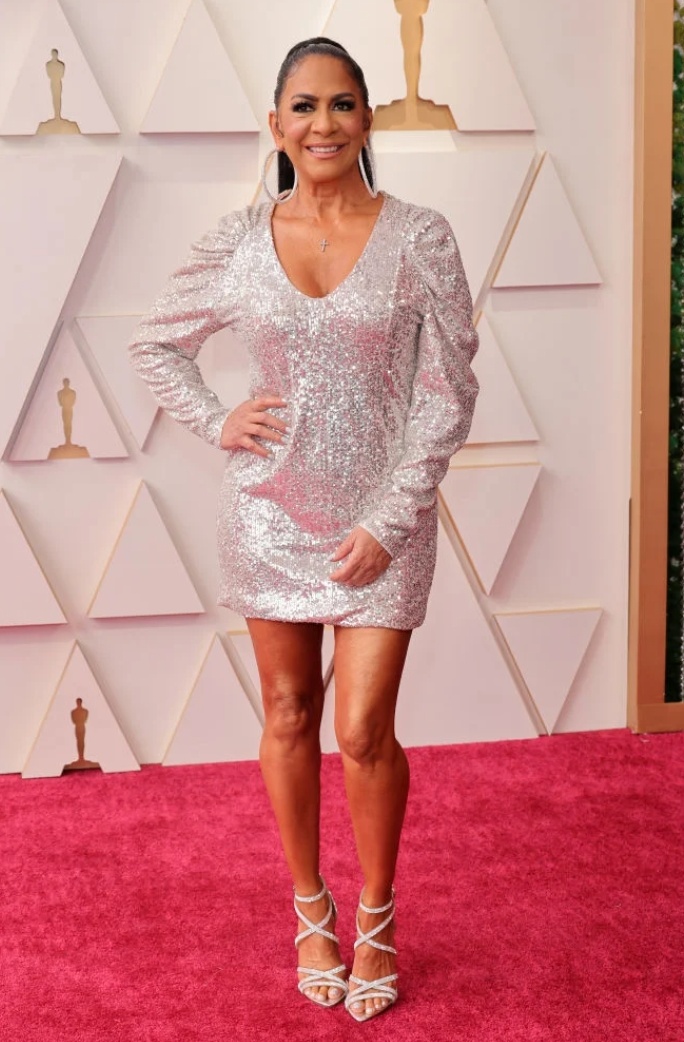 Well, if she had worn this outfit to an award show other than the Oscars, she would have slain it, as it doesn’t appear to be more gorgeous in the Oscars than the other celebrities who chose unique dresses.

Jada Pinkett Smith always rules the red carpet in the sleekest outfits. We have already taken a look at some of the actress’s most memorable wardrobe and shoe choices.

However, during the 2022 Oscars, her outfit resembled a lot like a bunch of green leaves rather than a dress. 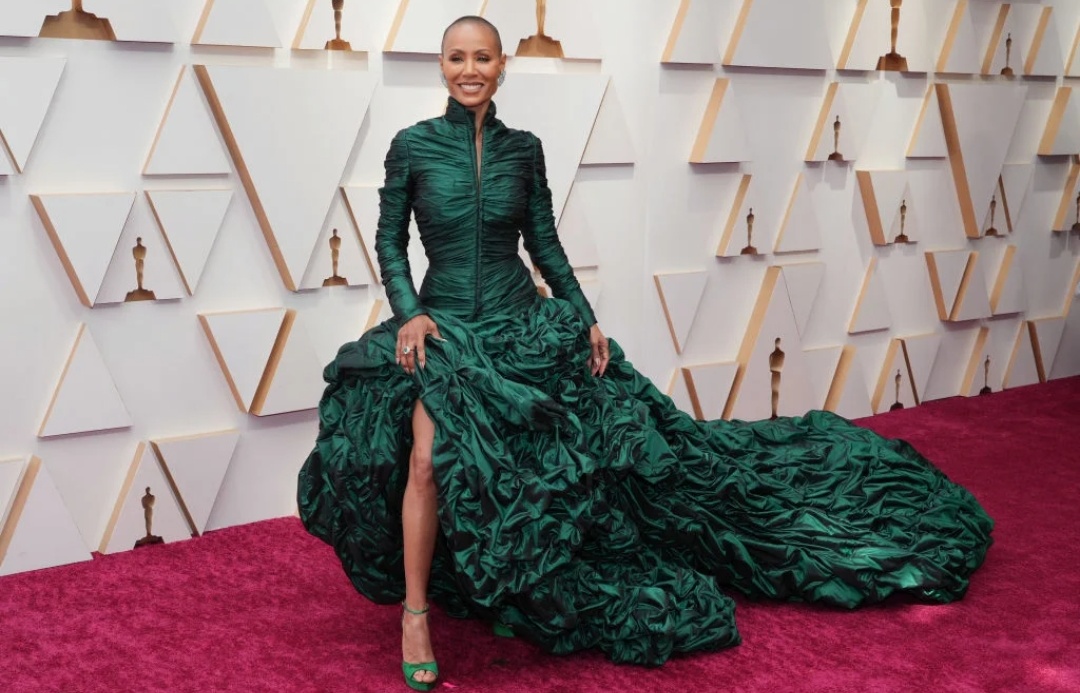 Smith donned a large puffy green gown that seemed to be extra strange and had too much extra volume making it not a very great choice for wearing at the Oscars.

We shouldn’t laugh at this, but this attire would look fantastic at a Halloween party. It’s a little disconcerting, to say the least. It has a gothic atmosphere about it, similar to Bride of Frankenstein.

The Oscars are about wearing the best outfits, not for Halloween attires but anyways. It’s not flashy, and we’re not sure if we’d call it pretty or bad, but it’s difficult to look away from. 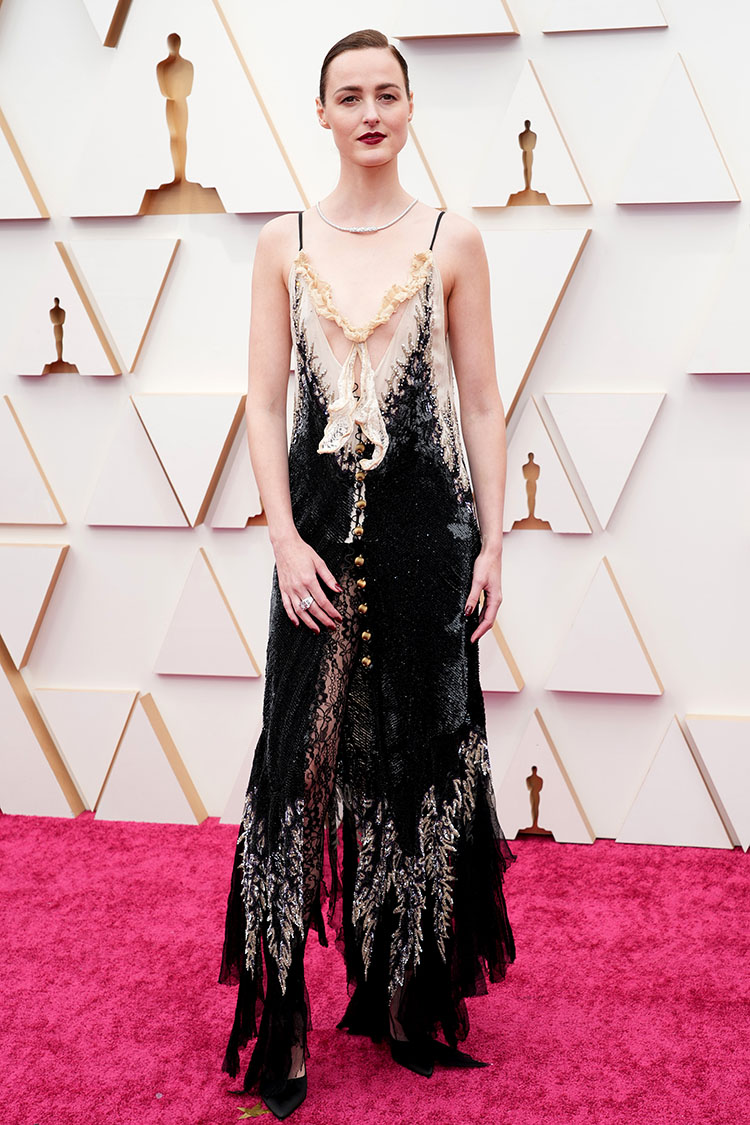 We’ve seen Zoe in blockbusters like After Earth and X-Men: First Class, but the young performer has also starred in critically acclaimed series like Big Little Lies and High Fidelity.

Kravitz’s style is anything but conventional, and she is in the spotlight for her acting abilities. Unlike her peers, the actress’s off-the-red-carpet style is relaxed, effortless, and does not appear to have been painstakingly put together by a personal stylist.

Indeed, she has demonstrated multiple times that her choices are out of the ordinary. 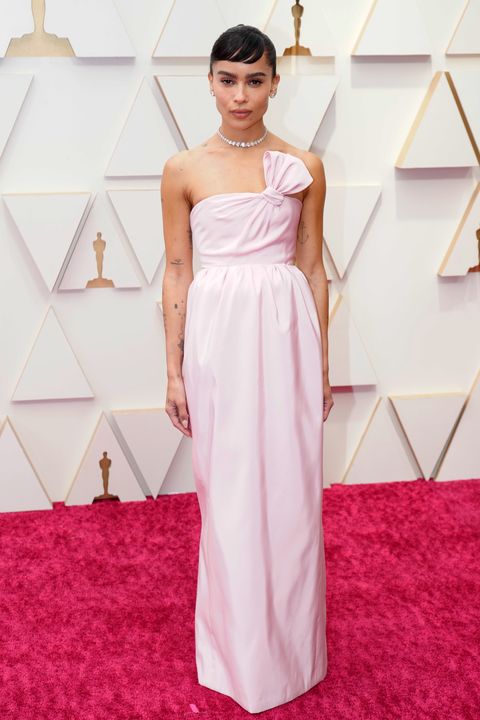 As previously stated, her dressing style is always out of the ordinary, but this time it appears to be kind of simple as she wore a light pink slip dress with a bow on the left shoulder of her gown. She looks pretty no doubt.

It was a fantastic way to remind the world that she’s equally at home in traditional romance as she is in dark superhero flicks.

Even so, if she had worn something different, everyone would have been amazed. Everything suits her that’s the reason she’s on the 9th number. Because we love her. 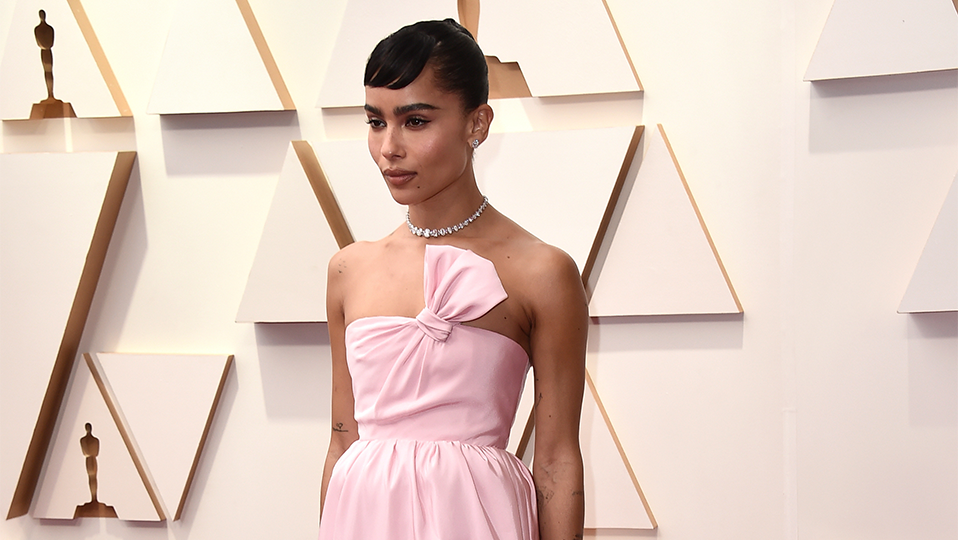 You look dashing Timothee but just not for the Oscars.

Timothee came shirtless in a sparkling jacket with black slacks and boots, not missing an opportunity to show off his goddess body.

We know he like formal clothes, but if he had worn something he had never worn before, it would have looked incredible and, without a doubt, flattering on him. 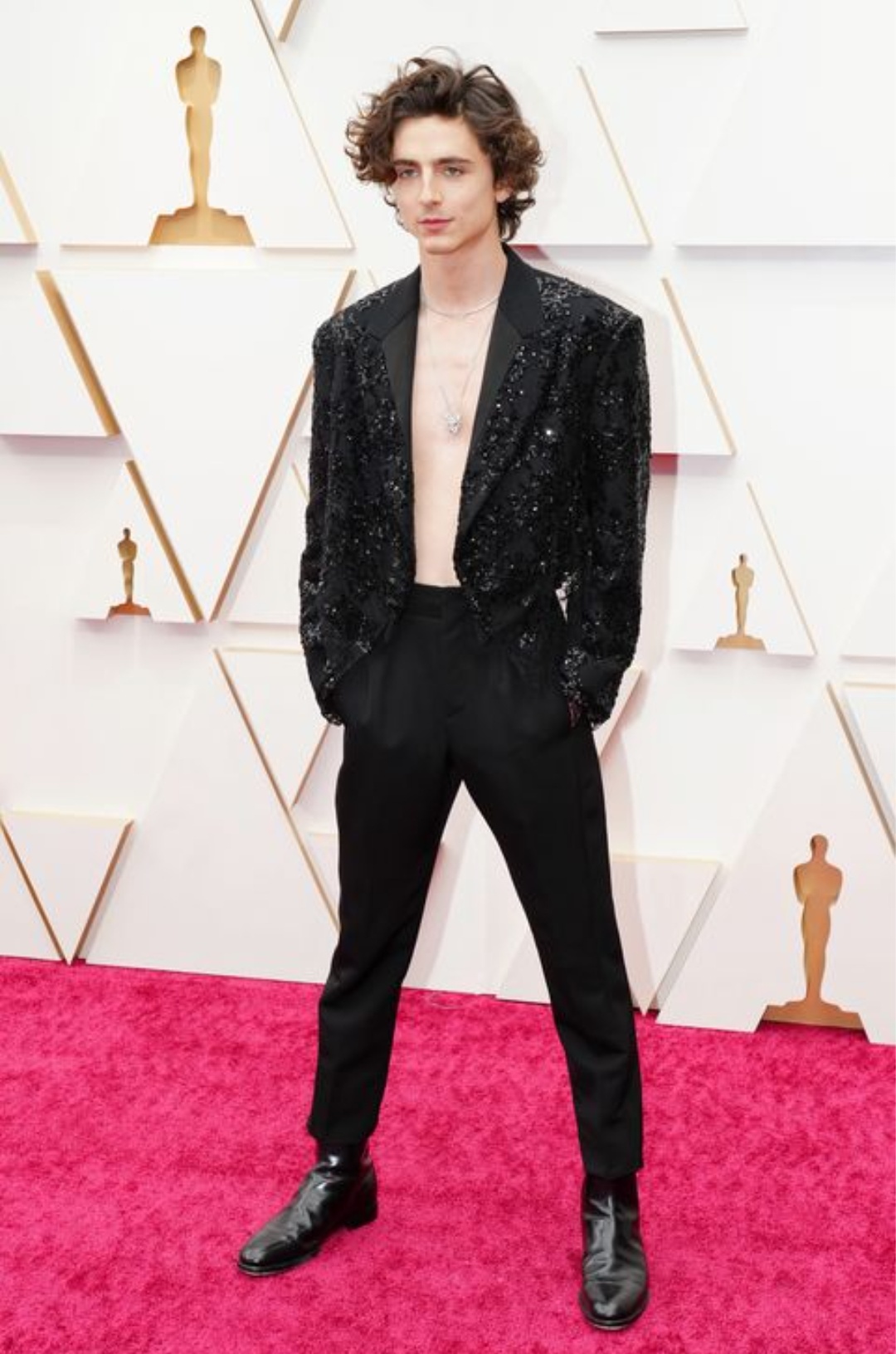 Timothée Chalamet, in addition to being the king of cinema (check out Netflix for proof) and the king of grooming, has won the title of king of style numerous times for wearing the nicest costumes.

But this time we guess he wanted the ‘king of shirtless outfit’ title.

It seems like Timothee preferred to flaunt his ‘common shirtless look’ at Oscars, which he looked totally comfortable in. But it’s not really that awful, just look at how ‘hot‘ he looks.

There were more scandals and stunning moments at the Oscars in 2022 than just the clothes.

Stay tuned for additional updates, and let us know in the comments area below who you think was the “worst dressed” from your perspective.