US basketball star Brittney Griner has been held in Russia since February on accusations of drug smuggling. Russia extended the WNBA star’s detention in June and it was stated that she would remain in Russian custody through at least July 2. As time goes by, Brittney wrote an open letter to President Joe Biden, crying for help. 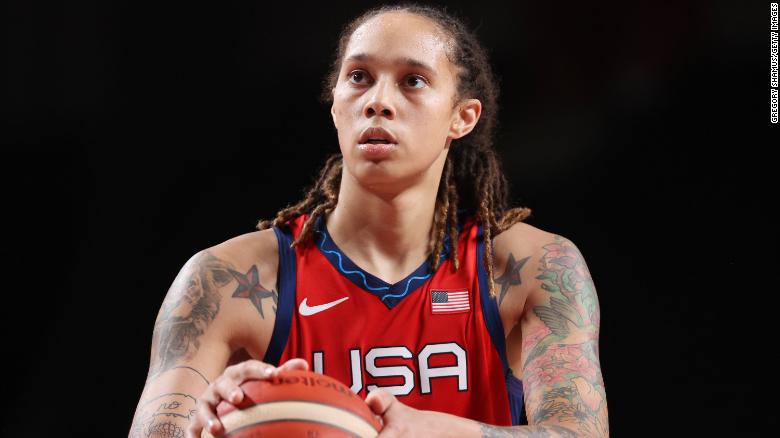 Terrified To Remain In Prison Forever… WNBA star Brittney Griner has finally spoken out for the first time since she was detained in Russia on charges of possessing cannabis oil while returning to play for a Russian team. he was detained at a Moscow airport after authorities there claimed she was carrying vape cartridges containing cannabis oil. Last month, the U.S. Department of State reclassified her as “wrongfully detained”, but nothing has been done to free her.

A ‘terrified” Brittney sent an open letter to President Joe Biden, crying for help. She writes:
“…as I sit here in a Russian prison, alone with my thoughts and without the protection of my wife, family, friends, Olympic jersey, or any accomplishments, I’m terrified I might be here forever.”

She continued, “On the 4th of July, our family normally honours the service of those who fought for our freedom, including my father who is a Vietnam War Veteran. It hurts thinking about how I usually celebrate this day because freedom means something completely different to me this year.”

The Olympic Gold medalist requested the president to not forget her as she writes, “I realize you are dealing with so much, but please don’t forget about me and the other American Detainees. Please do all you can to bring us home. I voted for the first time in 2020 and I voted for you. I believe in you.”

She adds, “I still have so much good to do with my freedom that you can help restore. I miss my wife! I miss my family! I miss my teammates! It kills me to know they are suffering so much right now. I am grateful for whatever you can do at this moment to get me home.”

Being Used As a Political Pawn… Brittney Griner’s detention has been extended repeatedly. Previously, a Russian court extended her pretrial detention until mid-May. Not only this, last month, the 31-year-old star basketball player’s detention was extended once again until June 18. In June, the court decided that Brittney will remain in Russian custody through at least July 2.

It appears to be a tactical move by Russia as it continues to use Brittney Griner as political bait amid tensions over Russia’s invasion of Ukraine. Well, Brittney’s agent Lindsay also stated that she is being used as a “political pawn”. In light of this, supporters, including Griner’s family and the WNBA, have vigorously advocated for her release.

On the contrary, Police have said she was carrying vape canisters with cannabis oil when detained at the airport. She could face up to 10 years in prison if convicted of large-scale transportation of drugs. Will Biden help her? What do you suggest?