What’s Going To Happen On September 24: Is The Doomsday Warning Real?

People across the globe are panicking about one date, i.e. September 24, and why not? Social media is full of doomsday warnings and memes, leaving us confused if it’s going to be the last day of our lives. From natural disasters; zombie events to World War III, tense clouds continue to hover over our minds. What’s the significance of this date and is the world really going to end three days from today? Is this one of the few articles you may be able to read before doomsday strikes? Let us explore together. What Will Happen On September 24?

September 24, 2022? A day remaining in our memories… something is amiss. #September242022 #EndTimeProductions pic.twitter.com/vPuKLlqNb7

Social media platforms like Twitter, TikTok and Instagram are flooding with wild claims such as, “the world is going to end on September 24”. From natural disasters, and the apocalypse, to World War III, people are making all sorts of claims before doomsday hit us three days from today.

For instance, one Twitter user even expressed his desire to do his prepper shopping before the world finally ends on September 24. Another wrote, “So what’s with September 24th? Are aliens having a coordinated landing? Seeing a lot of doomsday talk.” So, what’s the real truth? Is it a matter of grave panic or it’s just a part of some memes? And, where do these claims stem from?

Well, the rumours stem from a claim made by a German politician who’s been talking about a potential solar flare on the said date. If you’re still living in a cave, you may not be aware that a German politician named, Friedrich Merz was seen speaking in a viral video about September 24. He said, “This 24th of September will remain in our memories. In the future, we’ll say ‘I remember where I was on that day.”

One user tweeted: “I can’t help but wonder… WHAT? WTH IS IT? Why must they try to scare us, what’s going down on September 24? What’s going down in October? WHAT THE HELL IS IT? Just tell us!” The panic regarding doomsday was given fire by a Simpsons episode which predicted that the world ends on Sept. 24, 2022. Titled, “Homer Goes To Prep School”, the episode features Homer, who joins a survivalist group, and tells Marge, “The apocalypse is coming. Maybe not tomorrow, maybe never, but it’s coming. Now if you’re wondering what’s with this date, people have formed their own theories by picking up the episode number 24/9.

Is The World Ending On September 24? 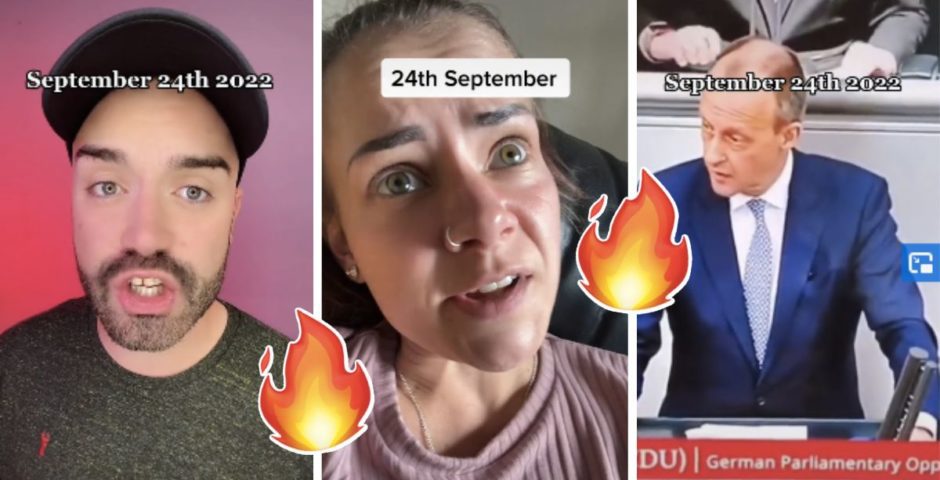 If you’re planning to do all the things you love, before September 24th, I’d say, take it easy and do those things on September 25th because we aren’t going anywhere. Because of this viral clip, people have circulated all sorts of warnings concerning the date. But again, it’s just some wild prediction and nothing more.

If you’re still panicking, consider laughing at all those hilarious Sept. 24 memes that lighten the mood. As a matter of fact, this German politician made a mistake while addressing the actual date. Merz was referring to the date of the Russian invasion of Ukraine, i.e. Feb. 27, 2022. As for the solar flare, it’s the social media users who’ve been spreading rumours of an ‘intense eruption of electromagnetic radiation in the Sun’s atmosphere.

But again, even though solar flares don’t usually represent a danger to humans, conspiracy theorists have claimed that this one will hit us hard. There is no proof that a solar flare will take place this Saturday (Sept. 24). If you don’t know this, such rumors consumed the minds of many people back in 2015. People were predicting that the world was expected to end between 15-28 September due to an imminent asteroid strike. It was also circulated that the ‘two-week period in question will be entirely free of Earth-destroying space attacks.’

However, NASA clarified the doubts back then, and released a statement, “The likelihood of any known potentially hazardous asteroid striking the planet within the next 100 years stands at 0.01%.” Adding further explanation, Paul Chodas, manager of NASA’s jet propulsion lab in Ca. stated:

“There is no scientific basis – not one shred of evidence – that an asteroid or any other celestial object will impact Earth on those dates. If there were any object large enough to do that type of destruction in September, we would have seen something of it by now.”

As for this year, be rest assured that the world isn’t ending on September 24th and it’s just another fake doomsday rumour, just to cause panic. But again, in the world of advice, considering the pace with which humans continue to exploit the planet, there will be a day when the world would surely end. Remember when Einstein said that World War III would be fought with sticks and stones? Well, that’s something people need to actively talk about.

I don’t know about aliens taking over our planet, or about a zombie apocalypse, but what I am sure about is that we are enough to cause destruction to the world. So if not September 24, 2022, someday we’d surely meet an end. It’s high time that we wake up and act wise! What do you think about this?