In Veera Hiranandani’s new middle-grade novel The Night Diary, readers meet Nisha, a shy and thoughtful tween who is about to come of age in what when then known as British India. At 12, Nisha and her twin brother Amil have already been through a lot. Their mother (who was Muslim) died in childbirth and they are being raised by their Hindu father and grandmother in the province of Sindh.

The family’s calm life abruptly changes in 1947, with the Partition of India and Pakistan. Nisha uses the diary she receives as a birthday gift to record the long and traumatic journey the family takes as they leave everything they’ve ever known to cross the border into India.

We reached out to Hiranandani to talk to her about her book, writing about traumatic events, and the importance of preserving the stories of Partition.

The Teal Mango: Congrats on how well The Night Diary has been received! It seems to have struck a chord with a lot of readers.

Veera Hiranandani: I’m so stunned and amazed by that. I really didn’t know how the book would be received. I had the idea for the book for awhile and I thought, ‘you know what, I’m just going to do a Partition story.’

TTM: You mention in your author’s note that parts of the book are based on your own family’s experience. Can you talk a little more about that?

Hiranandani: Part of the story is based on my father’s family. He grew up in Mirpur Khas, which is now in Pakistan and his family can be traced back hundreds of years in [the province of] Sindh. In 1947 he was nine and I don’t think his family understood the magnitude of what was happening — how could they? My father left Mirpur Khas with my grandmother and four of his siblings and then my grandfather followed on a train later. Growing up I’d hear stories about what happened from my aunts and uncles, but in bits and pieces because they were protecting me from what really happened.

My grandfather was the head of the hospital in Mirpur Khas and they didn’t want to let him leave because then there would be no doctor there. So then he just left. It was a harrowing time, but they made it out safely. So many other families experienced violence.

It wasn’t until I saw the movie Gandhi when I was 11 that I had seen Partition depicted and I realized that this was what my family went through. It peaked my curiosity and I wanted to learn more.

TTM: Talking to other South Asian Americans whose families were directly affected by Partition, I’ve found that a lot of them have said that their parents and grandparents never talk about it. The memories are too traumatic for them.

Hiranandani: I find that [not talking about it] is very common. I think that because my family survived and they weren’t in a refugee camp because they had family members who helped them get an apartment, that they could talk about it.

I have an aunt — she married my uncle, who has since passed away  — and all I know is that she was stabbed, but that’s all we know about it. We knew not to ask about it.

TTM: Is part of the reason that you wrote this book because you wanted to tell those stories?

Hiranandani: People of my generation, we have sort of this sense of urgency to preserve this history now. Have you heard of the 1947 Partition Archive? It’s an online archive and oral history project that’s collecting these stories. The first partition museum also opened about a year ago. So there is that sense of urgency, and this was my contribution to telling that story.

TTM: How did you do your research for this book? Did you talk to your dad a lot about his memories?

Hiranandani: I would have several conversations with my dad. He would look at the draft and give suggestions. I also read books like The Other Side of Silence by Urvashi Butalia and Yasmin Khan’s The Great Partition. I would also look at personal testimonies, I listened to hundreds of these and talked to other friends and relatives about their experiences.

I wanted to incorporate bits and pieces of all of these stories, that’s why I made Nisha half Muslim and half Hindu. She has a Muslim mother and a Hindu father and I wanted to look at how these communities that had been living together were torn to pieces after these lines were drawn. It ignited so quickly. I felt like Nisha could really ask those questions.

TTM: Have you ever thought about going to Pakistan to visit the town your family is from?

Hiranandani: I’ve definitely thought about it. And my father is 80 now, but he’s never been back since he left when he was nine. An equal amount of people were displaced from both sides of the border, so there’s this shared pain, but it isn’t shared in a way. So I would be very interested in going, but I don’t know when and how or how my father would feel about it. But I would think that he would want to come with me. 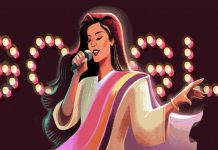 Our Casting of the Bollywood Version of ‘The Real Housewives’