As the war between Russia and Ukraine enters the fourth month, new maps have emerged showing details of Russia’s offensive in the eastern region of Ukraine. The U.K. Ministry of Defence tweeted a new map on Tuesday showcasing the areas of fighting across Ukraine. 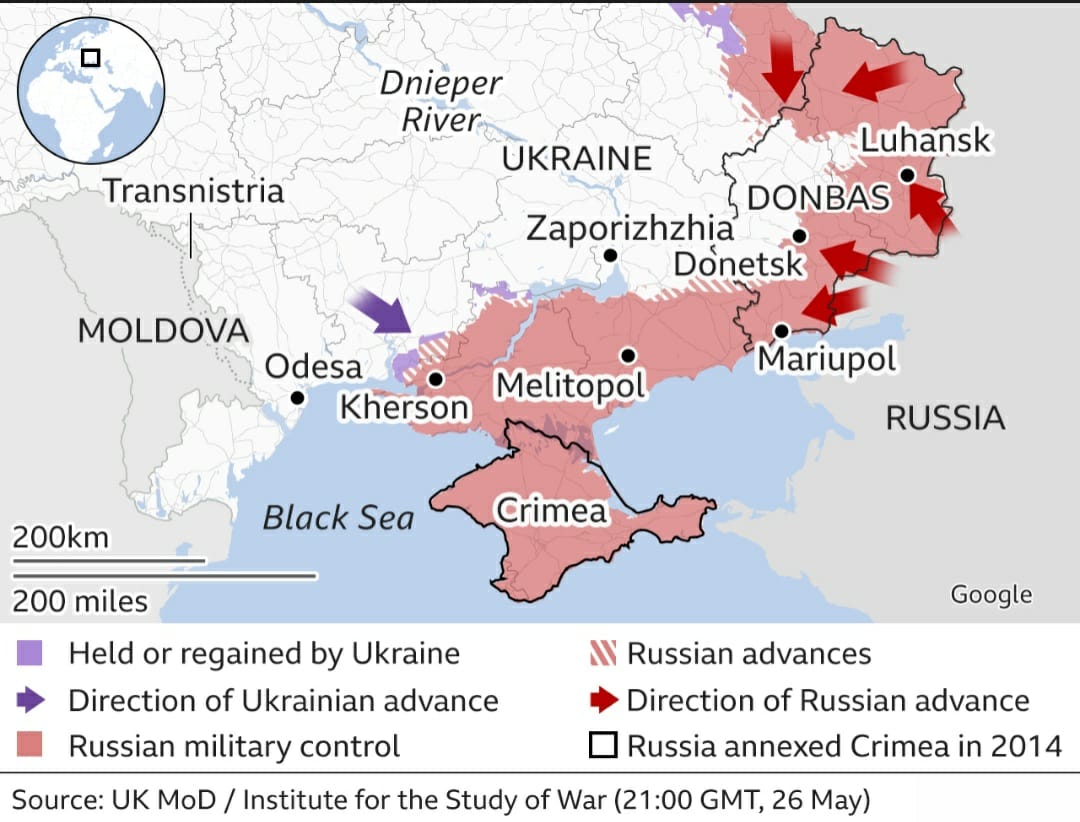 The illegal and unprovoked invasion of Ukraine is continuing.

Find out more about the UK government's response: https://t.co/OZ2IhpFyp5

The area between Zaporizhzhia and the Donetsk region still remains an important battleground while a huge area between Mykolaiv and Nikopol region is also a kind of tug of war between Russia and Ukraine. Russia might alter its strategy in east Ukraine as per the maps produced by the Institute for the Study of War and the Critical Threats Project. The American Enterprise Institute project primarily focuses on the ability to know hostile actions and keep a track of challenges facing the world.

As per Critical Threats, Russia’s primary objective in the initial days of the war was to capture the region between Izium, Donetsk, and Luhansk Oblasts, however, this may not be the case now as the map shared by the UK’s Ministry of Defence.

Critical Threats released a report on 24th May and mentioned details in the Key Takeaways section stating, “Russian forces have likely abandoned efforts to encircle large Ukrainian formations in eastern Ukraine and are instead attempting to secure smaller encirclements and focus on Severodnetsk.” 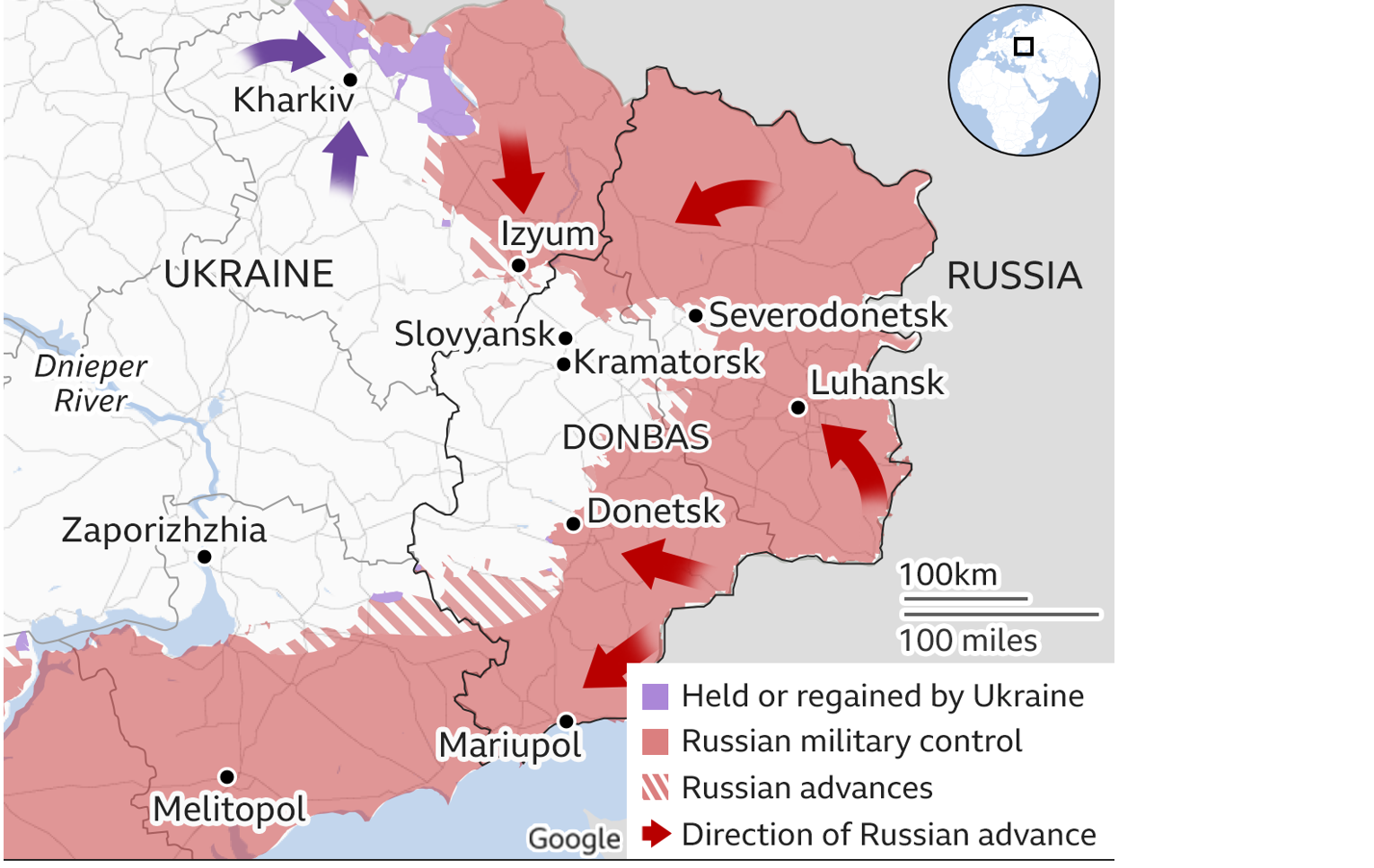 “This change in the Russian approach is enabling gradual advances, but at the cost of abandoning several intended lines of advance and abandoning the Kremlin’s intended deep encirclement of Ukrainian forces in eastern Ukraine. Ukrainian forces are likely conducting a controlled withdrawal southwest of Popasna near Bakhmut to protect Ukrainian supply lines against Russian offensives in the southeast of Bakhmut”, the report added.

Dmytro Kuleba, Foreign Affairs Minister of Ukraine has warned of Russia’s offensive in the region of Donbas.

He urged all allies of Ukraine to ramp up efforts to supply weapons and ammunition to the Ukrainian forces. He reiterated the importance of modern military equipment like rocket launch systems, long-range artillery, and armored personnel carriers.

Russian President Vladimir Putin expected a quick takeover of Ukraine when it ordered the invasion this year in February. However, Russia never expected stiff resistance from the Ukrainian people, who are fighting tooth and nail to safeguard its borders. 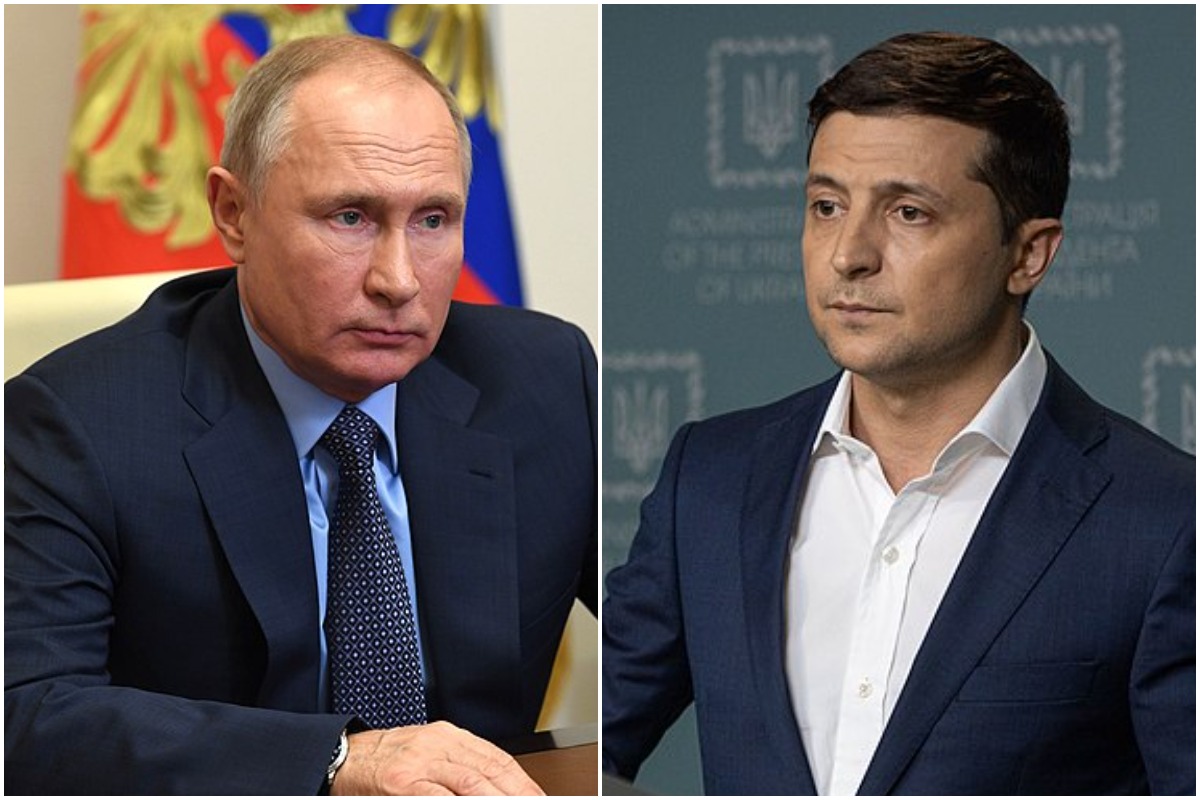 Russian military forces have been largely confined to the eastern region of Ukraine, including Donbas in the last many weeks of the ongoing conflict between the two countries.

According to the latest updates from British intelligence, it seems like Ukraine is making progress to retake the Kharkiv region under its control. Troops safeguarding the region have confirmed that they had pushed Russian soldiers all the way back to the border. More land west of Donetsk is also now contested between the two countries.

Bookmark this space and stay in touch to get the latest updates on the ongoing Russia-Ukraine conflict and more!