In her latest young adult novel “Mariam Sharma Hits The Road” author Sheba Karim puts her own spin on a storied tradition — the great American road trip. Titular character Mariam Sharma has a bunch of reasons to get away: her best friend Ghazala is being shamed because of a scandalous photograph, while their other friend Umar is coming to terms with his identity as a gay Muslim man. As for Mariam herself, she has just finished her first year of college and is slowly learning how to navigate adulthood in what is being called the first South Asian American road trip novel.

We had the chance to talk to Karim about why she connects to her characters, subverting tradition and the deep friendships we form as young adults.

Sheba Karim:  A while back, two of my best friends and I, all desi, formed the Sunday Night Drive Club. We’d get in the car and drive around New York City, talking, laughing, singing, confessing. Once in a while, we’d go on extended trips. Though I prefer walking or public transport to commuting by car, there is something special about the road trip, its possibilities for adventure, personal revelations and intense experiences.  Some of the best parts of the road trip are the conversations you have in the car, and I’ve tried to capture this in my book, with the friends talking frankly about topics like family, masturbation and love.

TTM: Did you take any trips like this when you were a teen or young adult?

Karim:  In high school, I wouldn’t have been allowed to get into a car with a bunch of young people and go overnight. My first road trip wasn’t until college, from Philadelphia to Orlando. It was quick, but super fun, and I remember thinking, ‘When can we do this again?’

TTM: The reason Mariam and her friends Ghazala and Umar decide to skip town and hit the road is because of a minor community scandal. A suggestive photo of Ghazala winds up on a Times Square billboard and she is being shamed by her family. How did you come up with that storyline?

Karim:  It’s based on a similar “scandal” that happened in the community when I was younger. I believe the parents forced the girl to drop out of college and move home, something Ghaz’s parents would have wanted her to do, if they could control her.

TTM: Your characters head South for their trip and, as the book’s description says, travel through “the land of pork ribs, mechanical bulls, and Confederate flags.” How familiar are you with the South? What have your experiences been like?

Karim: I’ve lived in Nashville since 2013. People call relatively liberal Nashville “South Lite” but it remains very different from the Northeast, where I grew up. There are many things I love about Nashville, and some I find difficult, such as how white it is in certain spaces. Having spent my adult life in Philly, New York and New Delhi, I was rarely the only brown person in the room. In my years in Nashville, this has happened many times, to the point where if another POC enters, I take note. Nashville is 40% non-white, but when it’s white, it’s white. 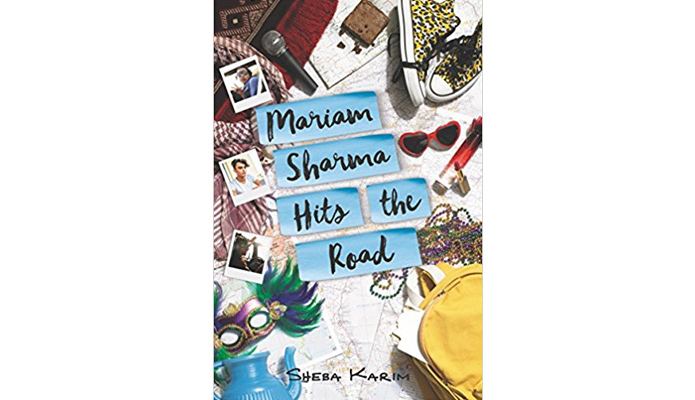 TTM: Over the course of the novel, Umar talks about his experiences being a closeted Muslim and his fears that his community won’t accept him. Why was it important for you to have a gay character in this book?

Karim:  My best friend is a gay Muslim. While his story is very different than Umar’s on a myriad of levels, I’ve always wanted to write a book which includes the perspective of a queer desi teen. In researching the book, I reached out to several gay Muslim teens who identify as religious and spoke to them about their struggles to reconcile their sexual and religious identities. What I found interesting was that most of them had accepted the fact there may always be some sort of dissonance, and their struggle was not to banish this dissonance but rather come to terms with it.

TTM: Ghazala wants to model (which is how the controversial photo came about) and she’s upset about what she sees as the repressive parts of the culture she grew up with and wants the ability to be more open. I feel like many second generation South Asians can relate to that?

Karim: I’ll refer to the story of the hijabi teen who lied and told police she was subject to racial and religious attacks by Trump supporters on the subway when she was actually out late drinking with friends. When her conservative parents find out the truth, they allegedly force her to shave her head. Afterward, the media published photos of her with her shaven head being arraigned in court. There was a lot of outcry about her false accusation, and the right wing had a field day.  Now of course filing a false report to police is a crime and should not be condoned, but there also was a lot of empathy for her from young Muslims. Imagine, it was less scary for her to lie to the police than tell her parents the truth! Though hopefully few of us have had to resort to such morally dubious extremes, many of us desis, young and old, can relate to the lies and deception necessitated by living a double life.  In my next YA book, the mother is a single desi American mother who shocks the community by having a child out of wedlock, and her now teenage daughter is witness to the continuing struggles her adult mother still has with her conservative grandparents. It never really ends!

TTM: Mariam is much more introverted than her two friends but she also comes into her own in this book. How would you describe Mariam to someone who hasn’t read your book yet?

Karim:  She is someone who thinks very deeply, and sometimes feels overwhelmed by how chaotic and self-destructive the world can seem. She wants very much to be a good and loyal partner, unlike her absentee father, so when she falls in love for the first time and ends up cruelly ghosting, she begins to question her own perception of herself — is she more like her father than she previously thought? She is very committed to her friendship with Ghaz and Umar, often playing the peacemaker between them. And though she doesn’t parlay wisecracks in quite the same way as the other two, she has a great sense of humor.

Order your copy of Mariam Sharma Hits The Road here.

For more conversations with young adult novelists, check out our interview with writers Sandhya Menon and Nisha Sharma.

BollyWould, Could and Should, but Doesn’t

Do you Know These 22 Ramadan and Eid Facts? Now you Do.