Prince Harry and Meghan Markle have raged a war against the royal family as the couple is only days away from dropping an explosive documentary about their time inside the royalty. However, the two managed to dress up for the Ripple of Hope Gala in NYC Tuesday (Dec. 6). During the event, put on by Robert. F. Kennedy Human Rights Foundation, the Dutch and Dutchess of Sussex were honoured with the ‘anti-racism award’. 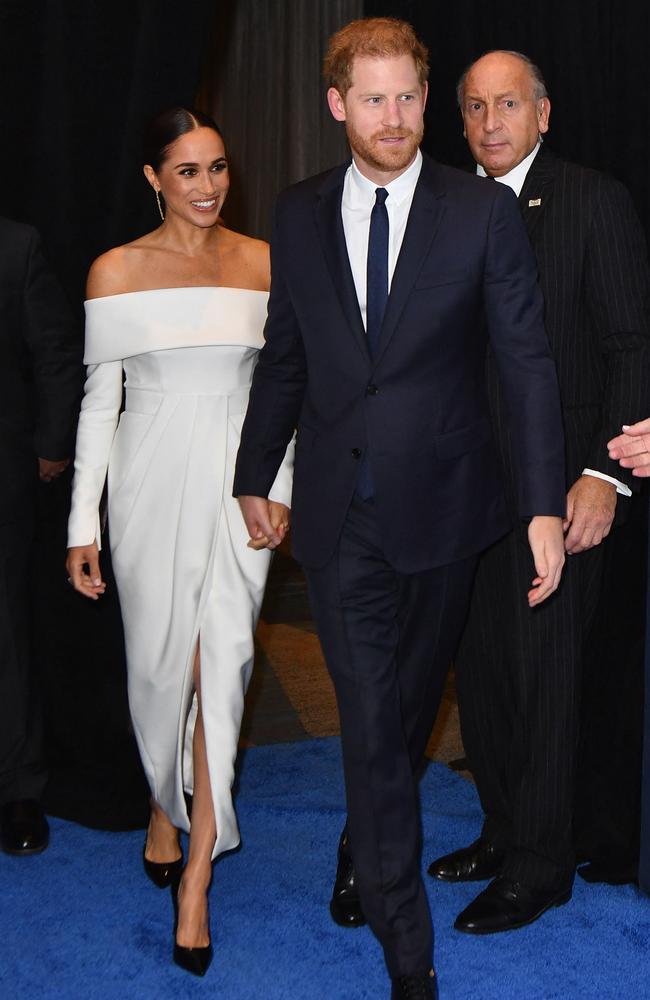 Meghan Markle and Prince Harry displayed a bold show days before dropping their bombshell Netflix docu-series, which gives us an inside peek at their tough time in the royal family. The royal couple appeared at the Robert F. Kennedy Human Rights ceremony in NYC, as they receievd the “anti-racism award”. The star-studded event was attended by celebrities like Alec Baldwin. The ceremony’s tables were sold for up to $1.5 million.

The Dutch of Sussex, 37 wore a blue suit while the Dutchess, 41 wore an off-shoulder high-thigh slit white gown complimenting it with a large blue ring, which appeared to be an emerald-cut aquamarine once owned by Princess Diana. The royal couple was felicitated with the Ripple of Hope award for their bold stance against “structural racism” in the royal family.

The award honors “exemplary leaders” who have demonstrated “an unwavering commitment” to social change. Previous winners of this award include Joe Biden and former presidents Barack Obama and Bill Clinton. Apart from this, Hillary Clinton, U2 star Bono and Desmond Tutu, who helped to end apartheid in South Africa are also the recipients of this award.

Harry And Meghan’s Fight Against Racism Meghan and Harry first called out the royal family during an interview with Oprah Winfrey, accusing unnamed members of the British royal family of racism. If you aren’t aware, Megan accused these members of raising “concerns” about the “skin colour” of her and Harry’s children. However, she declined to name anyone as it would be too “damaging” for the royals. During the interview, Meghan was seen breaking down in tears as she narrated the “structural racism” in the royal family.

The Dutch and Dutchess of Sussex refused to answer any questions asked by the journalist during the star-studded gala. However, they posed for photos alongside Kerry Kennedy (JFK’s niece). The award was given just one day after Netflix released the trailer for “Harry & Meghan”.

As the trailer was released, Harry and Meghan were criticised for misleading clips. If you haven’t seen the trailer yet, Netflix showed archived clips and pictures of Harry and Meghan wherein the couple talked about being sidelined by the Royal Family and hounded by the media, something that happened with Princess Diana. Some suggest that Harry and Meghan claimed racism just to seek attention, but don’t they have it enough?

However, it is reported that at least three of these images were taken from events that had nothing to do with the royal couple. We don’t really know what the truth holds, but the royal family indeed has a history of “structural racism”. For instance, Princess Diana’s claims cannot be completely ruled out, even though they were slightly moulded in the recent Season of ‘The Crown’ amid the queen’s death. What do you think?