The Congresswoman Alexandria Ocasio-Cortez has got engaged! She recently shared the great news of her engagement with longtime boyfriend Riley Roberts. Keep scrolling to know more about her fiancé. The current relationship status of the New York representative and her longtime partner is happily engaged. Alexandria revealed the news of her engagement to Riley on the social networking service Twitter.

On Thursday, the 32-year-old confirmed her engagement by retweeting a Business Insider reporter who announced the news. The lawmaker tweeted, “It’s true! Thank you all for the well wishes.☺️”

It’s true! Thank you all for the well wishes ☺️ https://t.co/i5cm9awN3S

In a separate tweet, the American politician also stated that the love of her life proposed to her nearly a month ago. “In PR about a month ago”, Alexandria wrote in another tweet.

In PR 🇵🇷 about a month ago

When did Alexandria meet Riley Roberts?

As per the reports of Business Insider, the couple met for the first time in the year 2011. At that time, both of them were undergraduate students at Boston University. Alexandria and Riley dated in college but they split after a while.

Soon afterward, Roberts shifted to Arizona. These two rekindled their romance when he moved to New York. During an interaction with Vogue in 2018, Alexandria talked about meeting her soon-to-be husband in true nerdy fashion. 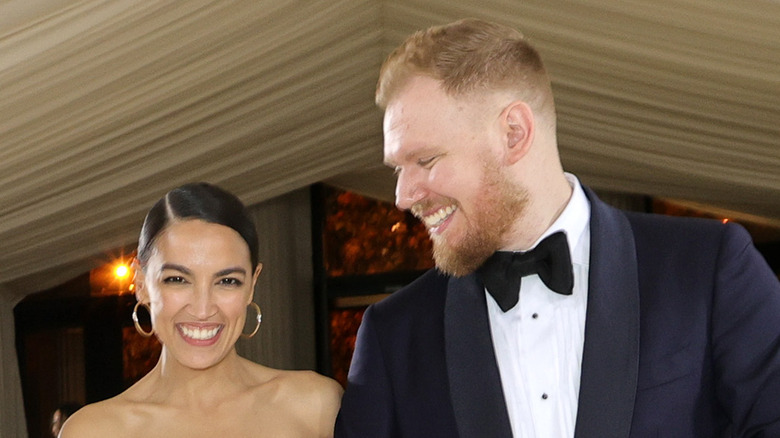 Riley and Alexandria crossed paths at a weekly Friday afternoon conversation hosted by the dean of the university. Usually, she likes to keep her personal life away from the limelight. She last posted a picture with Roberts on the social media platform Instagram on the occasion of Christmas in December 2021. She posted a boomerang of herself, her beau, and her dog Deco.

“Merry Christmas to all our friends and neighbors around the world celebrating today! 🎄 May we all bring our little share of peace on earth and joy to the world this year”, she captioned the post.

Here’s all you need to know about Riley Roberts

Riley was brought up in the wealthy area of Arizona, he is the son of a real estate agent. He acquired his education from top-ranked Chaparral High School in nearby Scottsdale and graduated in the year 2008  post-winning statewide honors in public-forum debate.

Once, Roberts completed college, he began developing websites for small businesses. At one point, he also did marketing for HomeBinder which is an online home-management service. When Alexandria’s partner returned to Arizona after college, he started working as a web developer before he reunited with the future congresswoman in New York. He played the role of a perfect boyfriend as he helped his ladylove with her campaign.

As a tech professional, Riley was well versed with the world of social media and he used that to assist Alexandria. According to New York Post, he hit the streets to collect signatures to put her on the ballot and filmed her trip to the Board of Elections to hand them in. She was sworn into the House in January 2019.

We send our heartiest congrats to Alexandria and Riley as they are all set to start a new chapter of their together. Don’t forget to stay tuned with us for the latest updates from the world of showbiz.