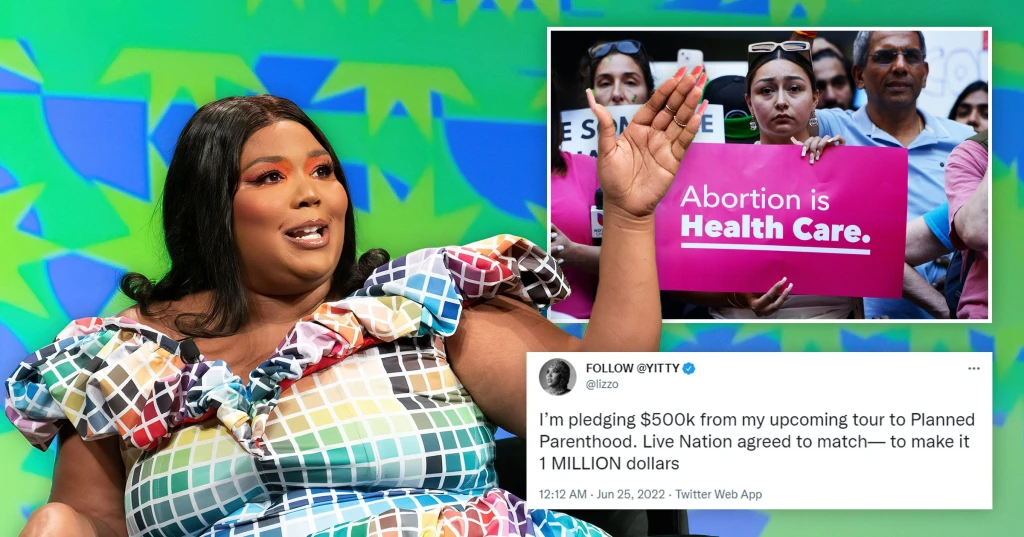 The singer shared on her Instagram the news of her intention to donate funds towards Planned Parenthood, she posted that “I’m pledging $500k from my upcoming tour to Planned Parenthood and Abortion Rights. Live Nation agreed to match— to make it 1 MILLION dollars.”

The Ruling which Motivated Lizzo

On Friday, the Supreme court of US overturned the landmark Roe vs Wade decision which was a ruling through which abortion rights were gauterentted all across the nation.

I’m pledging $500k from my upcoming tour to Planned Parenthood and Abortion Rights. Live Nation agreed to match— to make it 1 MILLION dollars

In response to this ruling which reveals how women are so powerless in the country that they do not even have rights over their own body. Lizzo added that through her donation she aims to contribute towards abortion funds as well.

She also expressed that “Black women & women of colour have historically had disproportionately less access to family planning resources— this is a great loss but not a new one. ”

The singer even posted that “The most important thing is action & loud voices. @PPFA @AbortionFunds & organisations like them— will need funding to continue offering services to people who are most harmed by this ban.” in response to this ruling which fails the women.

BREAKING: The Supreme Court just overturned Roe v. Wade, ending our constitutional right to abortion. We know you may be feeling a lot of things right now — hurt, anger, confusion. Whatever you feel is OK. We’re here with you — and we’ll never stop fighting for you.

In response to the ruling the CEO of Planned Parenthood, McGill Johnson expressed that “the majority of people still believe that Roe should be the law of the land, and I expect that number to actually grow over the coming weeks. We know that people do not want politicians and lawmakers to be making decisions for them, private decisions. And so, you know, people who oppose access to abortion, they have every right to not have an abortion. They don’t have a right to tell me or anyone else what we should do with our own bodies.”

The Chorus of Celebrities

Lizzo is the new addition to this chorus of celebrities who voiced their concerns against the court ruling to overturn the 50 year old case which was established to safeguard women rights to abortion in the US.

I’m absolutely terrified that this is where we are – that after so many decades of people fighting for women’s rights to their own bodies, today’s decision has stripped us of that. https://t.co/mwK561oxxl

Taylor Swift also spoke out and claimed that this decision is “terrifying” and Pheobe Bridgers is another celebrity which led a chant and protested against this ruling.

Ellen DeGeneres also expressed her views against the ruling and said that “Throughout history, women haven’t been trusted. Not to vote, or to decide who they marry, and now to make their own decisions about their bodies,” said the host. “But you can trust we will not let this stand, that we will be heard, and we will get the rights we deserve.”

With such influential people like Lizzo herself, hopefully the uproar will be heard and could enable some change in the history of women rights because rulings like these just makes us travel back rather then advance in the future.