This would happen if you’d try to touch Lil Baby during a concert. Well, ask this poor guy who got shoved off the stage by Lil Baby’s burly bodyguard.  During his Openair Frauenfeld set in Switzerland on Thursday (July 8), a fan tried to accost the rapper but got aggressively shoved off the stage. 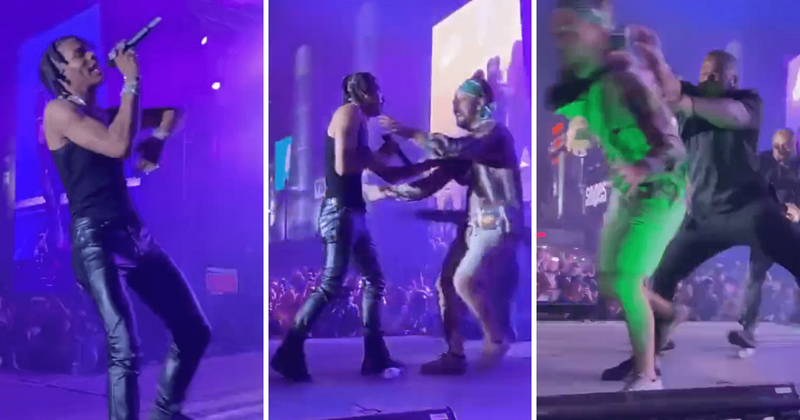 American rapper Lil Baby, whose real name is Dominique Armani Jones, was accosted by a fan on Thursday at the Openair Frauenfeld Festival in Switzerland. Well, the poor fan got shoved off the stage and fell into metal barricades before he could touch the rapper, courtesy of Lil’s bodyguard.

The father of two was rapping his hit song “On Me,” in front of a screaming crowd when a fan decided to manoeuvre his way on stage. He didn’t get too far though. Before he could even extend his arms fully, Baby’s security rammed him forcefully, causing him to fly off the platform and into the audience. Instantly, gasps filled the air as the fan made its way down. It’s unclear whether the fan got hurt or not. Someone in attendance at the Openair Frauenfeld Festival took the video of the incident and posted it on various social media platforms. The video reveals how aggressively the security guard shoved off this fan, sending him crashing into a nearby barricade. As reported by an outlet, the security guard was employed by Lil Baby. This is not the first incident wherein a fan has been mishandled by security guards. The past few weeks have been wilder than usual for concertgoers. Lately, there’s been an increase in the number of fans getting hurt. Roddy Ricch went through something similar this week. Last week, Lil Uzi Vert ended up hurting a young girl as he threw a cell phone into a jam-packed crowd. The phone went straight on the girl’s head and as a result, she started bleeding.

Another incident took place with Cardi B at the Wireless Festival. A fan captured the video as she got aggressive when someone from the crowd tried to accost her and grab her microphone. Well, in Cardi B’s case, she didn’t really need a bodyguard to do the job.

And, how can we forget the Astroworld tragedy? Nearly 10 people died and many were treated for injuries due to a fatal crowd crush. Travis Scott continued to perform and instigate the fans to go wild despite the chaos.

At the time, many concertgoers even documented the incident and shared photos and videos of the tragedy on various social media platforms. Travis Scott is the founder of the Astroworld Festival.

All this going-up-on-stage-and-attacking-performers has been happening a lot more lately. Dave Chappelle and Will Smith’s slapping incident during the 2022 Oscars is another incident that created chaos and resulted in Will Smith’s ban from the Academy. While it may all not be connected but one thing is sure, folks are surely feeling ballsy! What do you think?
Share
Facebook
Twitter
Pinterest
WhatsApp