Leonardo DiCaprio Stands For Mato Grosso Titi Monkey, One Of The Most Endangered Primates

Except for showing his love for Gigi Hadid, Leonardo DiCaprio is also sharing his concern for the planet earth and its species. In a recent Instagram post, the “Titanic” star shared information regarding the Mato Grosso Titi Monkey, which is now named as one of the 25 most endangered primates in the world. Citing deforestation as a prime cause, Leo enlightened his followers with the newest “Primates In Peril 2022-2023 report. 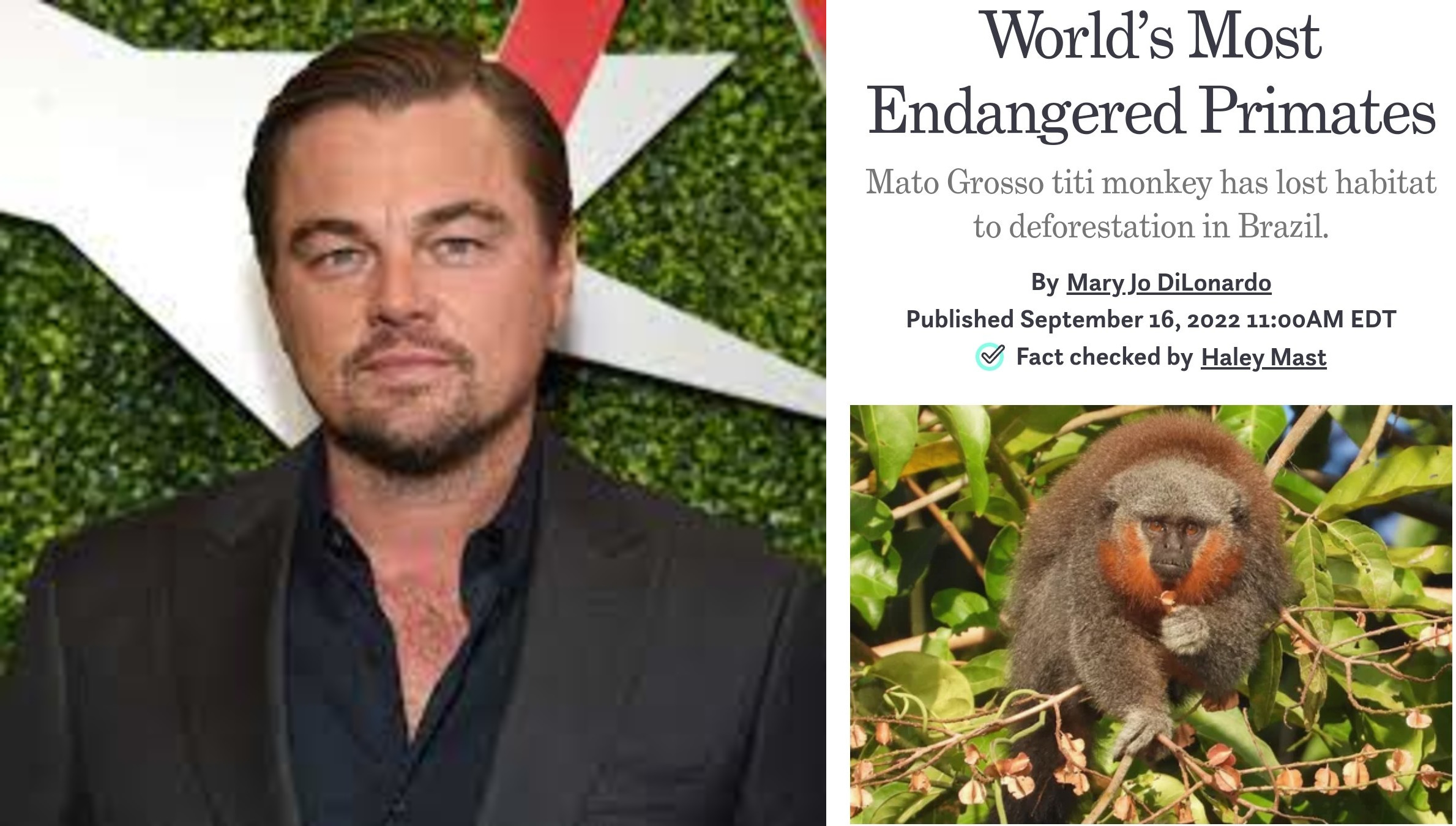 A Gorgeous Yet Endangered Primate…

Leonardo DiCaprio took to Instagram today (Sept. 19) and shared shocking information regarding an endangered species in Mato Grosso, Brazil. Identified the Mato Grosso Titi Monkey as its own species by researchers, Leo revealed that this small monkey now finds its name under one of the 25 most endangered primates in the world.

He also highlighted the cause per the new report “Primates in Peril 2022-2023”, which was launched this week in Mato Grosso, Brazil at the 19th Congress of the Brazilian Society of Primatology. He wrote:  “The Mato Grosso Titi Monkey is one of four primate species on the list from Brazil, which is home to more primate species than any other country in the world.”

Leo also expressed how the conservationists are starting to find the best ways to mitigate the threats to the Mato Grosso Titi Monkey and come up with a solid plan for their protection, “including law enforcement at Juruena National Park, the largest protected area for the species”.

Leo concluded by writing: The biennial ‘Primates in Peril’ report is a collaborative effort of the IUCN SSC Primate Specialist Group, the International Primatological Society and @Rewild. FYI, the picture of this gorgeous species in Leo’s post has been taken by photographer, Leandro Jerusalinsky, who is the head of ICMBio National Center for Research and Conservation of Brazilian Primates.

You must not be aware of this, but since 2002, seven new species of monkeys have been found, adding to a group of medium-sized primates, commonly known as titis. They are found only in South America. However, the recently sighted species, Mato Grosso Titi Monkey has been found in northern Mato Grosso State.

It has ‘an all-black tail, which is uncommon in titi monkeys found in southern and southern eastern Amazonia’. They weigh only about two pounds and are found in the Brazilian Amazon and where “the Amazon overlaps with the Cerrado ecosystem, one of the most threatened areas in Brazil.” The sad part is that these monkeys have been named one of the most endangered primates, and conservationists are finding the most viable methods to secure their existence.

Leonardo DiCaprio’s post has received around 55k likes (at the time of writing). In another post, Leo shared a link to the petition, “calling on all 12 presidential candidates to publicly commit to four critical actions for our planet: ending deforestation, reducing emissions, respecting Indigenous peoples’ rights and lands, and strengthening the system of protected areas.”

While no follower has responded to the gravity of risk surrounding these species, many middle-eastern women have commented on Leo’s post to become their voice. One woman wrote: “Please be our voice! #Mahsa Amini, the ‏twenty-two yo who was arrested and beaten by the”Islamic Moral Security Gestapo” of Iran’s Islamic Republic, passed away a few hours ago. ‏She was arrested for “improper hijab!” #lranianLivesMatter.” Another woman wrote: Please be our voice.

If you don’t know this, a 22-year-old girl called Mahsa Amini died following her detention by the country’s morality police for “improper hijab”. This has ignited rage in the country as women protesters continue to cut their hair and burn hijabs. Coming back to this gorgeous species, what do you think should be done?