Joey Chestnut is the winner of Nathan’s Hot Dog Eating Contest 2022! This is not the first time that he has won the food eating contest, in the past, he has been named the winner of the contest many times.

It seems like Joey Chestnut is a big foodie, which must have helped him win the contest. Continue reading further to learn the total number of hot dogs Joey gobbled down to win the competition. Not long ago, Joey Chestnut consumed a total of 63 hot dogs to win Nathan’s Hot Dog Eating Contest that took place on July 4, 2022. He managed to wolf down all these hot dogs within just 10 minutes. Isn’t that insane?

On Monday, Chestnut won his 15th title but this time he was not able to break the record that was set up in the year 2020. At that time, he gobbled down 76 hot dogs, buns included, also in just 10 minutes. It would not be wrong to say that Joey Chestnut is the undefeated champion of the Nathan’s Hot Dog Eating Contest. Geoffrey Esper landed in the second spot with 47.5 franks and buns, and James Webb came third.

What did Joey have to say after winning the Nathan’s Hot Dog Eating Contest?

After winning his 15th title, Joey even apologized to the crowd because he couldn’t break his previous record and stated that he would do better next year. As per various reports, he often trains for the contest by eating hot dogs and previously, he has participated in many food eating competitions.

During an interaction with ESPN, post his 15th win Chestnut said, “It’s beautiful to be back here.” He told the media outlet while downing all the hot dogs he experienced some kind of pain, which stopped him to reach his previous World Record best of 76 frankfurter and buns. He further added, “It hurts, but I was in the zone for a little bit. I was ignoring it.” The host of the Nathan’s Hot Dog Eating Contest, George Shea praised Joey and said, “Joey Chestnut is a force from beyond who defies the laws of physics.”

On the other hand, competitive eater Miki Sudo won the women’s division of the competition. She scarfed down 40 hot dogs and buns in the 10-minute match. She registered her eighth victory in the Nathan’s Famous Hot Dog Eating Contest.

The 36-year-old couldn’t participate in the annual Fourth of July competitive eating contest last year as she had a different kind of bun in the oven, a baby boy. 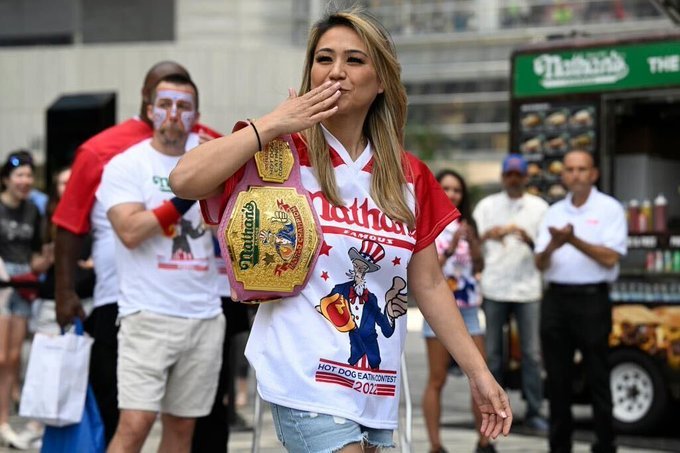 We send big congratulations to Joey Chestnut and Miki Suko on winning the Hot Dog Eating Contest. Do you think you will be able to wolf down 63 hot dogs in one go? Kindly let us know in the comments section below. Don’t forget to stay tuned with us for the latest updates from the world of showbiz.