Jared Goff, the Detroit Lions quarterback footballer, and the Sports Illustrated Swimsuit model Christen Harper are all set to tie the knot very soon as Harper shared the exciting news of her engagement with Goff on 18th June. The duo has been in a relationship since 2019. 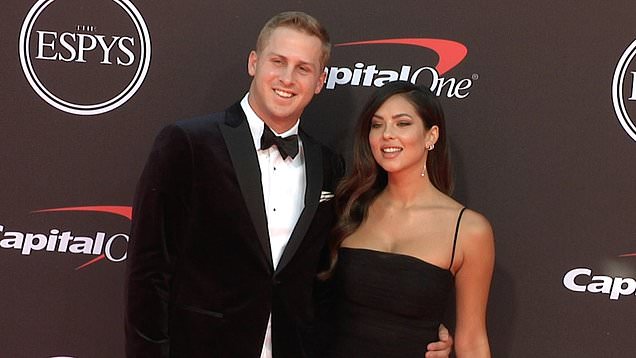 Harper took to the social media platform Instagram to share the big news with her 417K followers. She uploaded a video on Saturday with the caption “6.16.22 can’t wait for forever with you 🤍”. She disclosed that Jared proposed to her 48 hours before.

Harper further shared via her Instagram Story how Goff surprised her by setting up for the special occasion and flew in her best buddies. They were seen kissing on the beach in the video.

There was a spontaneous reaction on social media not only from their respective fans but also from friends and well-wishers who congratulated the newly engaged couple. Harper and Goff have been together for more than three years now. They made their relationship official this week.

In the past three years, Goff who used to play in a Super Bowl with the Los Angeles Rams was sent to Detroit in a trade for Matthew Stafford while Christen has made it to the pages of Sports Illustrated Swimsuit from an unknown model. Last month, Christen Harper took time off her busy schedule to spend a memorable few weeks with her longtime boyfriend. She enjoyed the holiday weekend in the Hamptons and spent quality time together. The couple was seen lounging on a bench outdoors holding their hands together.

Earlier in May, Harper shared about her SI 2022 ROOKIE SHOOT via Instagram by writing, “I am so humbled, honored and truthfully speechless to be a rookie in @si_swimsuit 2022. Every year SI breaks boundaries and this year is no different. So honored to be included in this group of inspiring women”.

The exact date and details of their first meeting are still not known in the public domain as the duo kept their relationship away from the media limelight.

Goff and Harper know each other since 2019. Harper was spotted at a Rams game, but not seen with Goff’s family and friends. In 2019, Harper paid a visit to the Rams’ Divisional Round game against the Cowboys. She confirmed in an Instagram story about her relationship with Jared from Mercedes-Benz Stadium.

A little about Jared Goff

Jared Goff was born in the year 1994 in San Rafael, California. He is a member of the National Football League’s Detroit Lions (NFL). Goff used to play college football in California. He was selected by the Los Angeles Rams in the 2016 NFL Draft.

In 2018, his team made their first-ever Super Bowl appearance after a gap of more than 17 years with Jared under center. He was later selected to the Pro Bowl in 2017 and 2018 due to his outstanding performance.

A little about Christen Harper

Christen Harper was born in the year 1993 in Los Angeles, California. She completed her Bachelor’s degree from the Cal State University of Northridge. She is a model and actress by profession. She is presently managed by W360 Management.

Christen began her modeling career at an early age, and it was her ambition to be featured in Sports Illustrated. She featured in movies like Seven’s Eleven (2004), the Auggie (2019), and The Obituary of Tunde Johnson (2019).

Bookmark this space and stay in touch for the latest updates from the world of showbiz!