The world is beginning to see the truth! GoFundMe is cracking down on pages trying to make money following the verdict in Johnny Depp’s trial, or maybe, it’s just that everyone is just done with Amber Heard. Read on to learn more about the Amber fan who claims to raise funds to help this vicious actress. 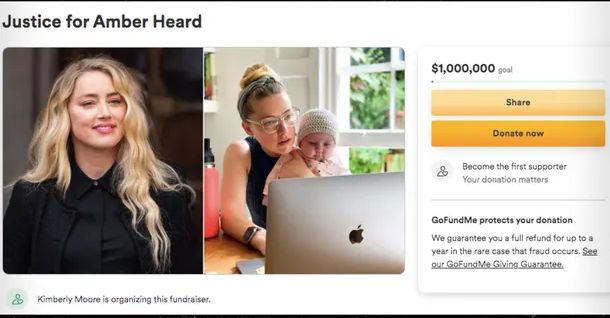 Johnny Depp has finally won the $50 million defamation case filed against ex-wife Amber Heard. The Virginia court has awarded $10.35 million to the “Pirates of the Caribbean”  actor. However, Amber’s lawyer said that she cannot afford to pay the roughly $10 million judgment.

Shortly after the verdict, a fundraiser, created by someone named Kimberly Moore was set up to help Heard. Moore claimed to have made contact with Heard’s legal team and vowed Amber would have direct access to any money raised.

Moore vowed that the “Aquaman” star would have direct access to any money raised. The page description stated:  I believe Amber and social media protected the abuser. The judgment exceeds her net worth. It’s so sad that he was able to get away with the abuse. The judgment furthers that abuse. If you can, please help her.”

The Fundraiser Page is Phony In such a scenario, Kimberly Moore’s page has directly violated the GoFundMe Giving Guarantee’s terms and conditions, whose primary goal is to ensure that the donated amount reaches the intended recipient.

As per the terms of the guarantee, the platform offers refunds to donors if something is suspicious or shady with any fundraising. Well, in this case, GoFundMe was able to flag the profile before a substantial amount of money was raised. The platform also plans to continue to look for fake pages and act accordingly.

In response to questions from the media over whether Heard is in a position to make these payments to Depp, her attorney, Elaine Charlson Bredehoft, answered, “Oh, no. Absolutely not.” Instead, Bredehoft stated that Heard plans to appeal the ruling but did not mention her financial options if she is obligated to make payments in the meantime.

Meanwhile, the 36-year-old actress was awarded $2 million in compensatory damages. This essentially means that Heard would need to pay Depp about $8.5 million. Amber’s current net worth tends to stand between $2 and $12 million.

In case she fails to pay the damages to Depp, and if Depp’s legal team plans to enforce the judgment, the step would result in a whole separate procedure in the court. This may also result in the attachment of Amber’s properties. What do you suggest?