Fortnite Short Nite Film Festival: Everything You Should Know

Since the last few years, Epic games have started to use Fortnite and its popularity to add new interactive experiences in the game. Even before the spread of coronavirus pandemic throughout the world, the company introduced many in-game events by collaborating with different organizations and artists. From collaborating with the latest movie, Star Wars: The Rise of Skywalker, to arrange an online mini-concert with Hip Hop star, Travis Scott. Epic games in their next event are opening the door of animation cinema for its Battle Royale by introducing Short Nite.

The event will start on July 23rd. And if you didn’t catch it the first time around, when it was available between 20 and 21st February, then this is the time for you to take advantage of the mini-film festival. This event is basically an excuse to spend some time with your friends and watch a couple of short films you might not get the time to see as a group anytime else. The event will start from this Friday, 2 P.M Eastern Time, with more short movies coming in the upcoming weekends.

Catch online shorts made by up-and-coming creators from around the world including the premiere of @GildedguyArt Gets Up!https://t.co/s4wqQ3aplv pic.twitter.com/NMXqa9QdzA

Call friends to your home, arrange a big screen, and start watching some of the greatest animated short films ever made. The event is mainly focused on two shorts from the popular Gildedguy Saga, along with the world premiere of the sequel Gildedguy Gets Up!” in which music is given by Emma Stevens. The total duration of the Short Nite series is of 40 minutes and it will continue to run non-stop for the next 48 hours, and most importantly you don’t need to have a movie ticket. Being a Fortnite player, you will also have the option of watching Short Nite while enjoying your Battle royale using the picture-in-picture feature.

For the scenes that contain dialogue delivery between characters, you will be given the option to enable subtitles in your preferred language. You can enable subtitles by heading towards the Fortnite Audio settings in the game. Note that, you won’t be able to record these short films using any screen recorder installed on your device. Instead, invite your friends and fans to watch with you live! However, if you somehow manage to record the streams, it will be subject to anti-privacy and DMCA regulation.

For all those who don’t know much about Gildedguy, he is a Dojo Duelist character developed by Michael Moy who is famous on the internet by the same name, Gildedguy. In layman’s terms, Dojo Duels is a program in which one creator can challenge other animators or artists for the battle between their own created duelist characters. 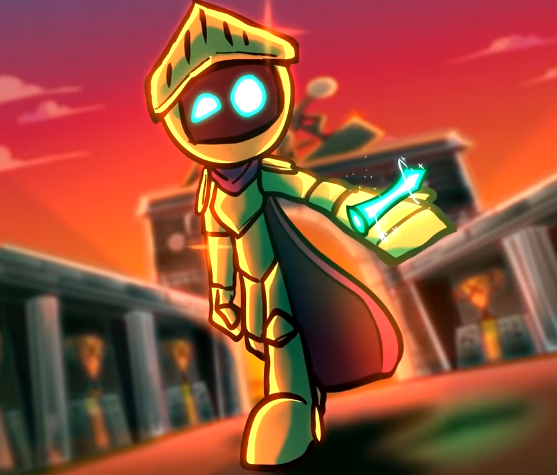 Before we discuss how to get the Gildedguy skin in Fortnite, let’s look at the back story of this character. So, initially, he was a house painter who loves to find pleasure in every moment of his life but also wishes that his life should be more interesting and entertaining. One day, while painting a house, he used an unknown substance on his paintbrush to draw a knight’s armor and sword on the wall. Surprisingly, his drawing turns into reality with an actual golden armor for him. After that, he gained more knowledge about the unknown material he used, and later he quits his job as a painter and turns into an artist. He has also been a part of various battles held between different fictional characters.

How To Get Gildedguy Skin In Fortnite?

Players can get Gildedguy skin in Fortnite by going to the item shop. The skin will be available in the game from July 22, 8 P.M. Eastern Time. And one can get the skin as a part of the Gildedguy set that will come along with Gildedguy outfit, Slush Fighter Cape Back Bling, and Stellapen Smashpack Pickaxe.

Being an Epic rarity outfit, Fortnite players will have to spend 1500 V-bucks to get access to the Gildedguy set in the game.