Floyd Mayweather Posts An IG Video Of 1-Year-Old Grandson, Says, “Fighting Is In His Blood”

Former professional boxer, Floyd Mayweather Jr. posted an Instagram video of his 1-year-old grandson, Kentrell Gaulden Jr., revealing his understanding of music and stating that fighting is in his grandson’s blood. The adorable boxing video of his little grandson is just one of the videos, depicting their grandfather-grandson bond. 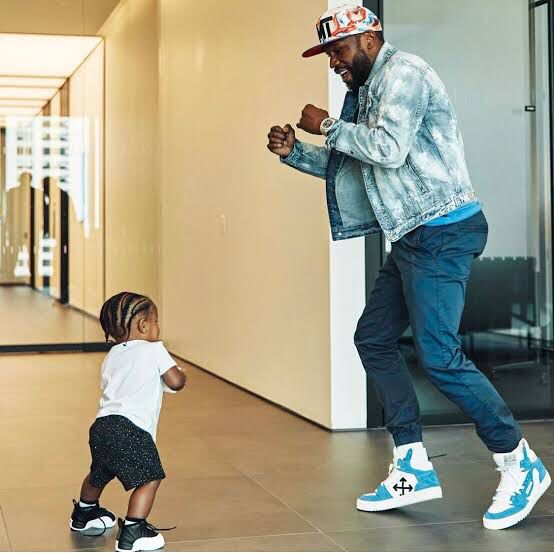 On The Beats Of Eye Of The Tiger

Floyd Mayweather is raising his grandson well! The former professional boxer recently posted a badass video of his one-year-old grandson, Kentrell Gaulden Jr., depicting the little boxer working on his hooks. In the background, Scorpions’ Eye Of The Tiger was playing and Floyd expressed that at just one, his grandson understands music, and of course, fighting is in his blood.

He captioned this video, “My grandson is only 1 year old! You already know music and fighting is something that is in his blood.” Kentrell was seen hitting a baby punching bag in a perfect stance. His video has received more than 576K likes. As soon as the video was posted, Floy’s comment section was filled with savage comments.

Floyd takes his grandfather-grandson time too seriously. This is not the first time that Floyd has posted Kentrell’s skills. His recent Instagram videos are a sign of how his grandson is getting active early and is keen towards learning boxing. Well, he’s just one but the boy’s got it in his blood.

Previously, ‘The Money Team Racing’ owner took his little grandson to a  $4.5 million rink to teach him the lifestyle of a millionaire like the one known as Money. The boxer, who continues to become rich by performing in exhibitions, took to Instagram and shared a video where he spent quality time with his grandson, with whom he enjoys skating no matter the cost, true to form.

In the video,  the 45-year-old former boxer was seen skating while holding Kentrell in his arms. In February last year, Floyd Mayweather purchased an ice rink at the Crystal Palace in Las Vegas for $4.5 million. He changed the rink’s name to Skate Rock City’. As a professional boxer, Floyd competed between 1996 and 2017, finally retiring with an undefeated record. He has won 15 major world championships, under the super featherweight to light middleweight categories.

Well, for Mayweather, family comes first. He has always expressed his love and affection for his family, making them a part of his extravagant lifestyle. The legendary boxer, in fact, has a large family, comprising four children Iyanna, Koraun, Zion and Jirah.

Kentrell is the son of Young Boy Never Broke Again and Mayweather’s child, Iyanna Mayweather. Apart from this, he also has an adopted son named Devin Cromwell. But again, isn’t Kentrell adorable? What do you think about their bond?