Dua Lipa’s concert in Toronto was on fire, literally and figuratively as fans lost control and lit fireworks inside the venue. The Grammy-winning artist took the stage of Scotiabank Arena Wednesday (July 27) when a series of fireworks were set off. A video showing multiple explosions as Dua and dancers perform. The Police Is Investigating…

Fireworks were apparently smuggled into @DuaLipa's #FutureNostalgiaTour show in Toronto last night and was set off at the roof and the audience. Luckily, no injuries were reported. pic.twitter.com/3qkB9Ea6E7

Fans can really lose control while watching their favourite stars perform. During her concert in Toronto Wednesday (July 27), fireworks were apparently snuck into the venue and illicitly exploded during her concert.  Videos of the incident started surfacing on social media wherein one can see fireworks in the floor section of the Scotiabank Arena.

In a statement to The Post, Maple Leaf Sports & Entertainment — which owns or operates several area venues including Scotiabank Arena — acknowledged the incident as well as an investigation into it. The company said:

“Last night, at the end of a concert event at Scotiabank Arena, unauthorized and illegal fireworks were set off on the arena floor by a member of the audience. As a result, three attendees received minor aid on-site and were able to go home without a need for further medical attention. As one of the premier venues in North America, creating a safe and secure venue for every attendee at Scotiabank Arena is MLSE’s top priority and we immediately began working in cooperation with Toronto Police Services to fully investigate this reckless and dangerous act. As always, we thank Toronto Police Services, the on-site medical team, employees and concert attendees for their swift support in responding to this incident.”

The police revealed that three people suffered minor injuries and were attended by medics working at the concert. However, no one required further medical assistance. There was also no damage to the arena. Still, it was enough to scare and disperse the crowd, especially after the fatal attack at Ariana Grande’s Manchester, England, concert in 2017.

Dua Lipa Performs Till The End… Videos posted on social media revealed that the “Hotter Than Hell” songstress was walking the runway and was visibly aware of the pops but continued dancing to “Don’t Start Now”, even though she was looking at her background dancers in confusion. One fan wrote, “Look at her face!”.

Many fans questioned the concert security as possession of an unauthorized pyrotechnic device, smoke or fireworks is a clear violation of the arena’s code of conduct, so it is unclear how the perpetrator snuck them in.  Videos show Dua with a slightly confused expression on her face as the commotion started. The fireworks were set off while the pop singer was ending her performance on the opposite side of the arena.

the security last night for the premium gate barely checked any of the bags ,, they didn’t even look or touch mine or my friends. they just seemed so rushed. please get this fixed asap – it could’ve been bad last night, thankfully it was “only” fireworks and nothing worse 😖

Questioning the concert security, one fan tweeted, “the security last night for the premium gate barely checked any of the bags, they didn’t even look or touch mine or my friends. they just seemed so rushed. please get this fixed asap – it could’ve been bad last night, thankfully it was “only” fireworks and nothing worse.” The investigation regarding the incident is going on and cops are working with the security staff at Scotiabank Arena to review surveillance footage to determine how the fireworks were brought inside and who is responsible for setting them off.

Although she didn’t address the incident directly, Dua Lipa posted a statement on Instagram, Thursday (July 28) evening affirming  that she and her team were “just as shocked and confused by the events as you all are.” 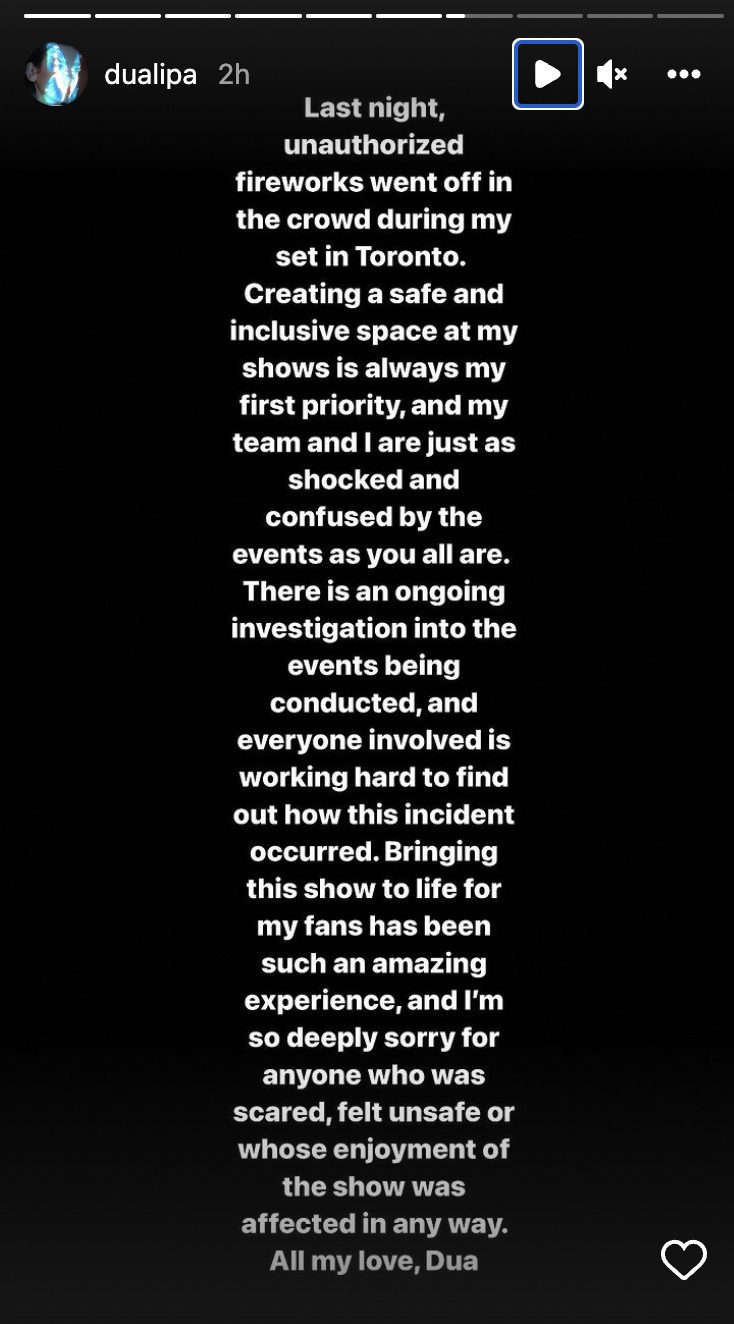 She concluded: “Bringing this show to life for my fans has been such an amazing experience, and I’m so deeply sorry for anyone who was scared, felt unsafe or whose enjoyment of the show was affected in any way.” Dua has not yet responded to the request for comment.