As the ongoing defamation trial between Amber Heard and Johnny Depp gets intense, “Euphoria” star Dominic Fike has revealed his wildest fantasies. His mid-concert comments about envisioning “hot” Amber Heard “beating” him up are going viral. Read on to know all about it. 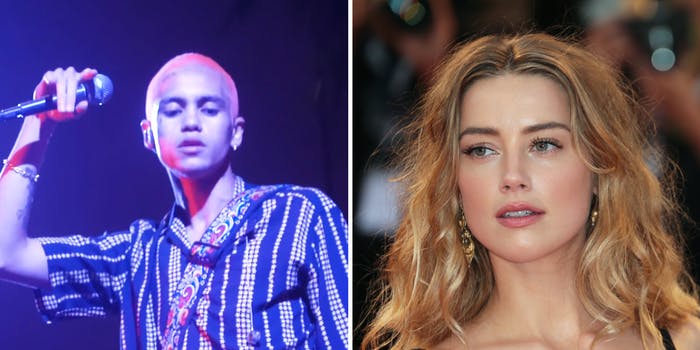 If I were a boy, Amber would not even be the last person on my mind. However, there is someone who thinks that the “Aquaman” star is hot and is having visions about her. Well, it’s none other than the 26-year-old Dominic David Fike!

Fike revealed that he thinks the actress, 36, is “hot,” adding, “I don’t know. I know it’s not the popular opinion, and I know it’s not the focus at the moment, dude, but I’ve been having these visions of her.” The actor and rap-rock artist, who paced the stage as he spoke, clarified that Heard was beating him up in his visions. “I think it’s hot,” he concluded.

Dominic Fike describes fantasizing about being abused by Amber Heard at a recent show:

"I'm gonna be real with y'all. I actually think Amber Heard is hot… But I've been having these visions of her [where] she's beating me up. I think it's hot.” pic.twitter.com/1YbNED80hz

The crowd attending this concert was heard booing in the background of the video. The 21-second long TikTok has received over 1.2 million views and 136k likes. Users shared their views in the comments section of the video, with most of them criticizing Dominic Fike for his remark.

Yo @dominicfike WHY JUST WHY , that shit was disgusting to say, I loved u man but fck u dom!! JOHNNY DEPP ALL THE WAY!!! disappointed ngl #JohnnyDeppAmberHeard #JohnnyDeppIsInnocent #dominicfike

As the concert footage circulated on Twitter, social media users wrote that Fike’s “career is over” and asked why he would “cancel himself like that.” One tweet read, “That’s disgusting no matter how you view the trial and a weird thing to say about a potential abuser/victim.” Another noted, “Making light and romanticizing domestic violence is weird.” @dominicfike #DominicFike disgusting. Weird that you are fantasying about domestic violence 🤡🤡 Dominic David Fike is an American singer, songwriter, musician, and actor. Fike first received recognition after releasing several popular songs on the website SoundCloud. Following the release of his debut extended play, Don’t Forget About Me, Demos, he signed to Columbia Records.

In September 2020, Fike became a headliner for a concert series in the video game Fortnite. In 2022, Fike became a cast member of the second season of Euphoria in his first main acting role, Elliot.

why dom u couldn’t even last a year??? anyways glad he said that so we know what type of person he is; the type to fetish abuse because he finds it attractive 🤢 #DominicFike #AmberHeard

The Johnny Depp Vs. Amber Heard trial recently witnessed Kate Moss’s testimony wherein the Birtish supermodel revealed that Johnny never pushed her or kicked her from the stairs. She rebutted Amber’s false allegations against the 58-year-old star. The jury is set to give a verdict on 27 May 2022. What do you think about Fike’s comments?