The former heavyweight champion Deontay Wilder has been honoured with a bronze statute by his hometown of Tuscaloosa, Alabama. 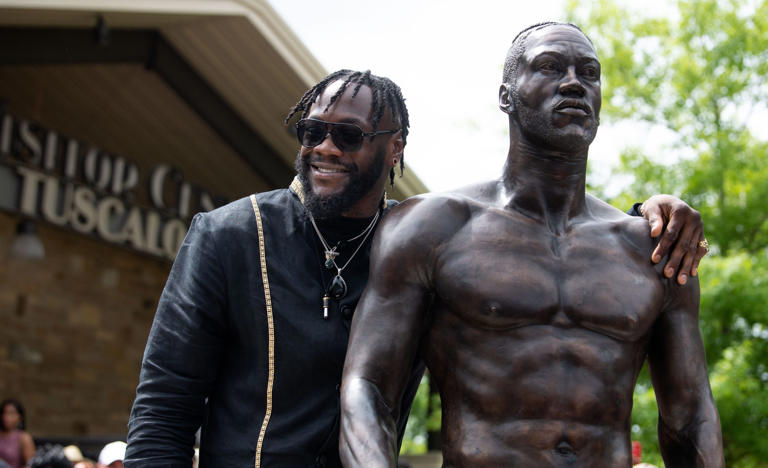 Wilder Overwhelmed by this Honour

The city of Tuscaloosa unveiled a statue of Wilder outside the Tuscaloosa Tourism and Sports as a tribute to his achievements in his decorated career which as per the fighter is not yet over.

The fighter was overwhelmed by the statue, which was sculpted by Caleb O’Connor, a local artist of Alabam. He took up to his Instagram and expressed his feelings “What an amazing event to be a part of and a very special moment in history. My statue will be here for generations to come and I got my flowers while I was alive!!!!!! Thank you so much to all that was involved I love you guys and thanks to my city and state for there’s no damn place like HOME!!!”
“Blessings 🤴🏿🙏🏿”#BombZquad #BlackHistory #TilThisDay”

The statue outside the Tuscaloosa Tourism and Sports offices will be a permanent display at the 1900 Jack Warner Parkawy.

“Our organization has long supported Deontay Wilder and his journey to becoming a heavyweight champion.  We’re proud of his accomplishments and are thrilled the visitor centre will be home to this incredible statue,” Don Staley, the President of Tuscaloosa Tourism and Sports expressed.

Deontay Wilder with his statue… pic.twitter.com/DO2xKUbfDG

“His championship title has put our community, Deontay’s hometown, on the map and his statue will pay tribute to that,” Staley said.

The Tuscaloosa’s heavyweight lifter, Deontay Wilder has a remarkable backstory, he started by doing several odd jobs to support his daughter Naieye, who was stricken with spina bifida, before embarking on his pro boxing career.

He was successful in securing a bronze medal in amateur competition at the Beijing Olympic games 2008. He trained at Sky Gym, “a Northport storage-facility sweatbox with walls of corrugated metal” to finally become the WBC Heavyweight Champion.

The statue’s making was not all so sudden but it was a seven-year-long journey since the idea cropped in O’Conner’s mind to the public introduction of the statue. What took this long was the funding snags, the likeness’ international acclaim and the cracked rib, which was of O’Conners, not the statue’s.

STATUTE UNVEILED FOR DEONTAY WILDER IN TUSCALOOSA: one of the coolest stories I’ve covered in a long time. City of Tuscaloosa showed love to the former Heavyweight champ today and unveiled a statue in his honor. Caleb O’Connor is the artist who created the bronze statue pic.twitter.com/0deBpLoB4k

The 6 foot 7 inches life-size likeness required O’Connor to construct a scaffolding in his studio from which he nearly fell twice. “Definitely some bruises and I think I might’ve fractured a rib,” O’Connor said last week. “For a month after that, whenever I coughed or laughed it would hurt. It was almost unbearable. I just sculpted too long into the night.”

Wednesday’s public reveal of the statue would have happened way before but Wilder asked O’Connor not to display the statue until he has unified the heavyweight title. So the sculpture remained in a crate until O’Connor received a call giving him a nod to putting it to display.

Heavyweight Champion and Tuscaloosa native Deontay Wilder (@BronzeBomber) will be honored by the City and @VisitTuscaloosa with a sculpture created by Caleb O'Connor. 🥊 🏅

Join us for a free unveiling ceremony on May 25 at Tuscaloosa Tourism & Sports! https://t.co/BkdHjXLcB6 pic.twitter.com/uLjNhJ95nR

“It just felt like the right time. Everything I do is always about timing,” Wilder said. “And it felt right at this point, and it panned out great.”