Cardi B Calls JT a Lapdog of Nicki Minaj, Here’s All You Need To Know About Their Beef

Cardi B and JT are making headlines on social media for their ongoing beef on Twitter. The Invasion of Privacy rapper and JT, who worked together on “Twerk”, got into a heated debate on Monday (Oct. 3) after Cardi B and GloRilla’s collab “Tomorrow 2” reached No. 9 on the Billboard Hot 100. What’s The Beef Between Cardi B And JT? 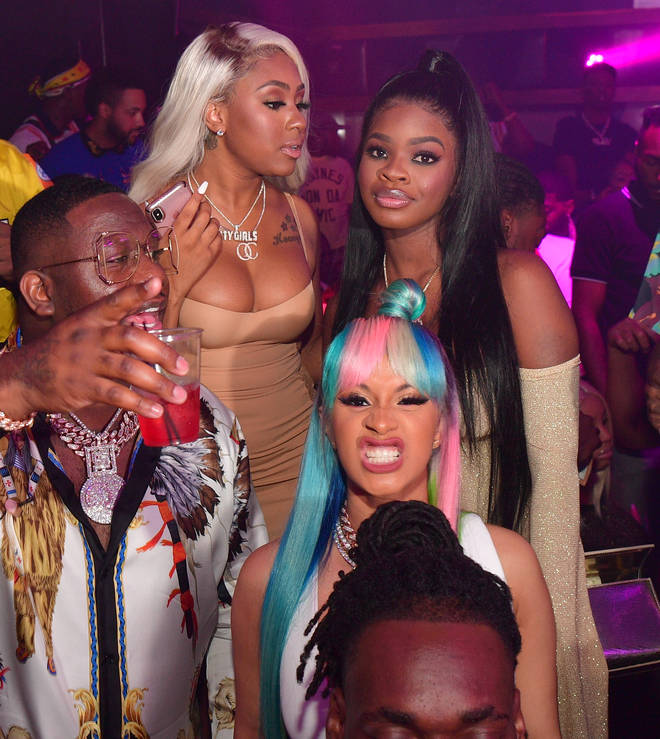 Cardi B and City Girl’s JT have escalated their online war by firing dirty shots at each other. The heated argument began on Monday (Oct. 3) when JT congratulated GloRilla for “Tomorrow 2”, which reached No. 9 on the Billboard Hot 100. However, she failed to mention Cardi B, who collaborated with Glorilla on the hit number.

JT tweeted, “I’m not like that at alllll I been doing remixes & never got credited ON A CHART BUT they get sung word for word and help push the original songs as intended unlike y’all well I can’t even say y’all cause you don’t rap, you TWEET! Congratulations Glo&stream FNF remix AND QUEENMIX.”

Now, we don’t know if it was a coincidence or not, but Cardi B, re-tweeted, “And my records live in the top ten.” After this, a Cardi fanned the fire by tweeting that JT did not congratulate the “Holy Shit” rapper because she is afraid, Nicki Minaj “will get the whip”.

On this, JT fired back, “NAH actually the tweet was too long! PLUS Cardi Been having top 10’s I’ve been congratulating her for years this is GLO first one, I’ve been ignoring y’all but y’all are hella annoying, move round & get off my DICK thank YOU!” Another fan wrote, “Nicki put you to this.”

Cardi you go fetch a real talent! We DM’ing why you come back here to put on a show for these KIDS? https://t.co/5bIjN3kSov

Well, this was enough for the two artists to get into a word war. Cardi came forward and simply wrote, “Lapdog”. On this JTventually simply wrote “lapdog.” On this, JT hit her back by writing, “wiener dog”.  Both artists even tweeted about DMing each other over this beef, and continued arguing over writing skills, label politics, chart numbers and whatnot! Cardi accused JT of taking things to her timeline.

Matter fact, I’m not even doing this on the timeline! It’s becoming real repetitive for doggy treats. We already addressing it in the DM’s. GOODBYE YALL

No you wanted our written!!! For our hooks for our sound cause you clearly have none! Ask ANY writer! I write my OWN shit!!! You know this https://t.co/A40cSm38zr

But today was supposed to be about GLORILLA! instead you called me a lap dog nah bitch ima a BIG DOG!! roof roof!!!!!

At one point Cardi B wrote, “Matter fact, I’m not even doing this on the timeline! It’s becoming real repetitive for doggy treats. We already addressing it in the DM’s. GOODBYE YALL.” As for hitting each other on their writing, JT wrote,  “No you wanted our [writing]!!!” JT retorted. “For our hooks for our sound cause you clearly have none! Ask ANY writer! I write my OWN shit!!! You know this.”

Nicki Minaj has changed her profile image on Twitter to a picture of City Girls’ JT. ♥️ pic.twitter.com/5Xtiihh1G9

Things were already worse, but then Nicki Minaj made an entry to hit back at Cardi B. While we all are aware of the bitter relations between the two artists, Minaj has now joined this escalating feud between JT and Cardi B. She changed her profile picture on Twitter to a picture of JT.

Later, Minaj removed JT’s picture and replaced it with a picture of herself holding the pend in front of her name (as a neon sign). There are speculations that Nicki may be writing and heading to the studio for new music. A few days back, Cardi B was hit by “Black magic rumors”. And if you’ve followed, there were many Nicki Minaj references in her response.

In 2018. American rapper Azealia Banks fired shots at Cardi B by accusing her grandmother, Abuela Bardi of using witchcraft on Nicki Minaj. She also mentioned that Cardi was also an accomplice in the disguised act. So yea, the beef between the two goes long back. Well, it seems like JT and Cardi are unstoppable as Twitter continues to buzz with insults from both sides.