The ongoing conflict between Russia and Ukraine is making a buzz at the Cannes Film Festival held at the Palace of Festivals and Congresses of Cannes in France.

The cast and crew members of Butterly Vision movie that premiered on 25th May, held protests against the Russian “genocide”. The Ukrainian director Maksym Nakonechni and members of the production team including producers Darya Bassel and Yelizaveta Smit and actress Rita Burkovskawere held a banner that read, “Russians kill Ukrainians. Do you find it offensive or disturbing to talk about this genocide?”

Not simply this banner but the filmmakers also protested the Russia-Ukraine conflict by wearing the T-shirts that read the same message. They expressed their angst in front of Salle Debussy, the second-largest theater in Cannes.

According to reports published by one of the media outlets, “The protestors were demonstrating against what they see as a dangerous form of censorship by social media platforms, which, in their opinion, are hiding the uncomfortable and disturbing reality of the war.”

“Butterly Vision” movie is all about a lady Ukrainian soldier Lilia, who runs away from Russia and returns back to her home country Ukraine to lead a normal life after she was held by the Russians as a prisoner of war for months together. The film premiered in the Un Certain Regard section on Wednesday.

The movie’s official synopsis reads, “The trauma of captivity continues to torment her and surface in dreamlike ways. Something growing deep within Lilia will not allow her to forget, yet she refuses to identify as a victim and will fight to liberate herself.” Russian state delegations and any person related to the Putin administration were banned by the Cannes film festival this year. Even though there were suggestions to completely boycott Russian films, Russian filmmakers were allowed to participate in the event.

Well, for the unversed, let me tell you that this is the third such protest that has been witnessed at the Cannes festival’s red carpet this year.

The first such instance hit the festival on May 20 which spoiled the red carpet for George Miller’s film. Ahead of Miller’s “Three Thousand Years of Longing” premiere, an unnamed female activist stripped completely to protest sexual violence committed against women after a special military operation announced by Russia in Feb 2022.

She had Ukrainian flag colors on her body with the message “stop raping us” that was written across her stomach. 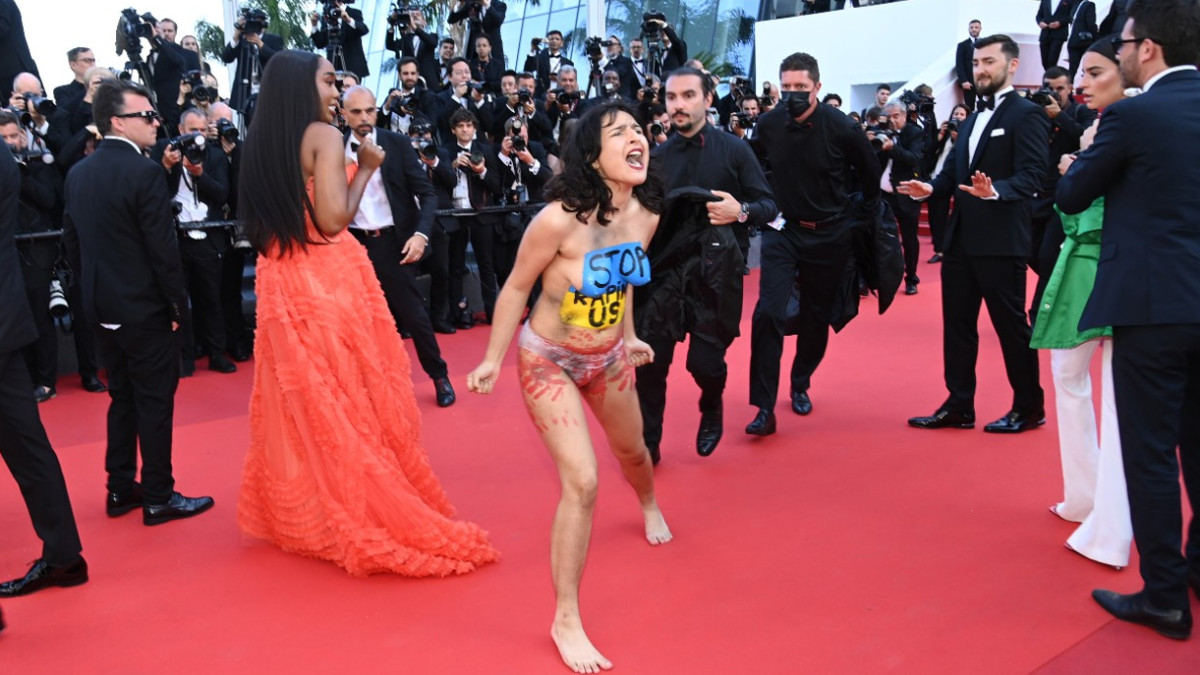 Then on 22nd May, one more such political statement happened when Les Colleuses feminists held a banner using smoke devices. There were 129 names of women on it who have been domestic violence victims in France since the last film festival. 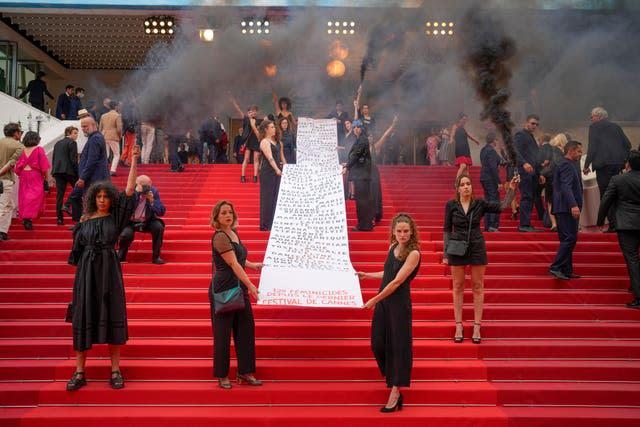 Ukrainian President Volodymyr Zelenskyy was also invited to the Cannes film festival and he did mention war during his opening address saying, “Will cinema stay silent or will it talk about it?”

In his address, he also tried to highlight the similarities between the real-time war vs reel time fictional war.

What are your thoughts on such protests that are being staged at the Cannes Film Festival? Share in our comments section below!