Recently, the South-Korean band BTS joined White House Press Secretary Karine Jean-Pierre to give a powerful speech about the increasing number of anti-Asian crimes in the United States as AAPI Heritage Month comes to a close. Members of the South Korean band, BTS came forward at the White House on May 31, 2022, Tuesday in Washington, DC. to meet U.S president Joe Biden to talk about Asian inclusion and representation and discuss the recent rise in anti-Asian hate crimes.

RM began the powerful speech while the rest of the six members of the band stood behind him, all of them were dressed up in black suits. He said, “Hi, we’re BTS. It is a great honor to be invited to the White House today to discuss the important issues of anti-Asian hate crimes, Asian inclusion, and diversity.” Jin took over and further added, “This AAPI Heritage Month, we join the White House to stand with the AAHPI community and to celebrate.” Then, Jimin continued, “We were devastated by the recent surge of hate crimes including Asian-American hate crimes, but to put a stop to this and support the cause, we’d like to take this opportunity to voice ourselves once again.”

J-Hope thanked all the fans and followers of the band by saying, “We are here today thanks to our ARMY, our fans worldwide who have different nationalities and cultures and use different languages. We are truly always grateful.” 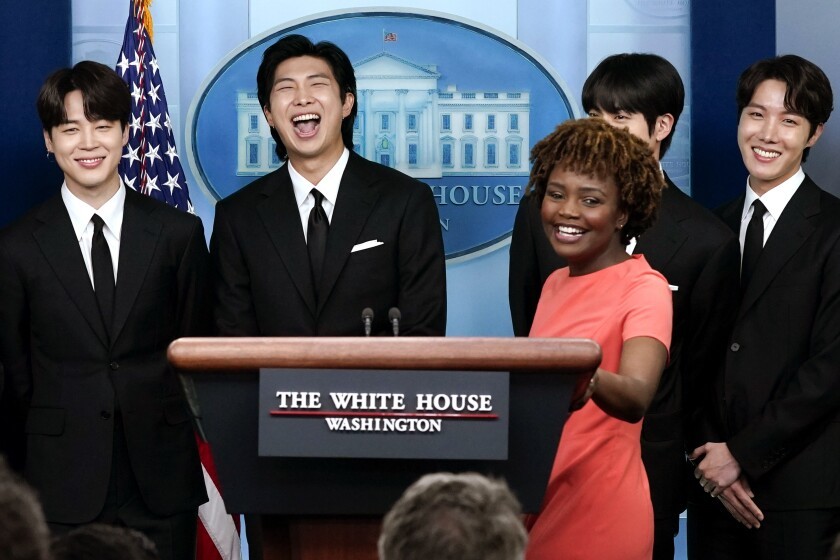 Jungkook went on to say, “We still feel surprised that music created by South Korean artists reaches so many people around the world, transcending languages and cultural barriers. We believe music is always an amazing and wonderful unifier of all things.”

Suga added, “It’s not wrong to be different, and equality begins when we open up and embrace all of our differences,” before V concluded, “Everyone has their own history. We hope today is one step forward to respecting and understanding each and every one as a valuable person.”

Asian-targeted crimes have been on a rise in the U.S lately

Earlier this year, the hate crime data was compiled together and published by the Center for the Study of Hate and Extremism. The data stated that the anti-Asian crimes have increased by 339 percent in 2021 in comparison to the previous year. Popular cities such as New York, San Francisco, Los Angeles, and many other cities have witnessed a major jump in the number of anti-Asian crimes in 2021 and it has managed to cross all the record numbers of 2020.

BTS has been vocal about facing discrimination

In March 2021, the band tweeted and shared their own experience with discrimination with their fans. Around the time, they said, “We recall moments when we faced discrimination as Asians. We have endured expletives without reason and were mocked for the way we look. We were even asked why Asians spoke in English.”

They further added, “Our own experiences are inconsequential compared to the events that have occurred over the past few weeks. We stand against racial discrimination. We condemn violence. You, I and we all have the right to be respected. We will stand together.”

We need to do better for ourselves and our upcoming generations. Don’t forget to stay tuned with us for the latest updates from the world of showbiz.