Blue Hoodie Girl, Who are you?

Let’s answer that question, shall we?

Blue Hoodie Girl is the talk of Twitter right now and after the video went viral, we know exactly why did that happen.

The video now stands deleted, but don’t lose hope y’all because we are about to explain to you everything about this incident which has something to do with ‘Karen’ as well. 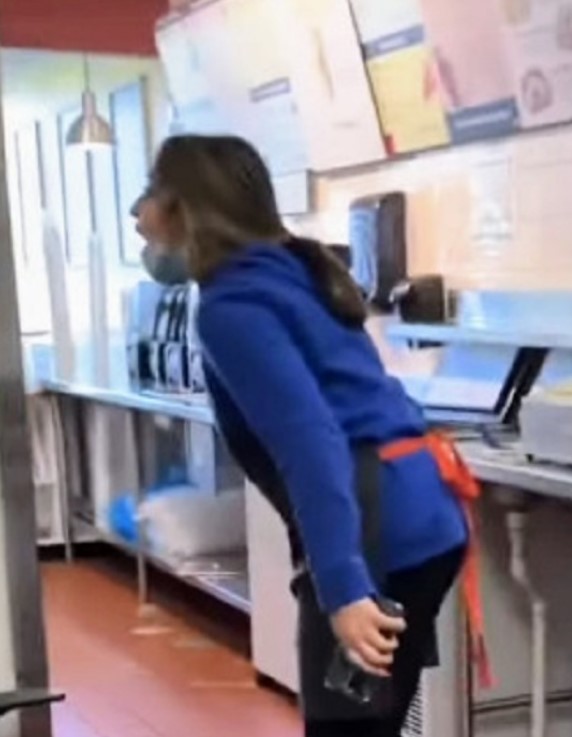 Should we get started then?

The video became popular from TikTok.

The incident took place in Connecticut, Robeks Smoothie Shop, where a customer was found throwing a smoothie at an employee of the shop.

Here is what happened.

James Iannazzo went to the Robeks Smoothie Shop and placed an order for his son. His son is allergic to ”peanuts” and thus, his father ensures that his son is offered a smoothie without peanut butter.

Consequently, his son suffered an allergic reaction and thus, was rushed to a hospital. Iannazzo came back to the shop.

The video went viral on TikTok gathering more than 16 million views now. Before James breached the entrance, he made sure to find out who made the smoothie.

This led to anger in the man that resulted in him throwing the smoothie that hit the ”Blue Hoodie Girl.”

The Blue Hoodie Girl asks him to leave but he continues bad-mouthing her.

According to the police, he turned himself in.

We have managed to find the video here. Watch it below on a tweet.

I've identified this man as James Iannazzo of @MerrillLynch being racist and assaulting a minor pic.twitter.com/O8Ic6jyh3p

Memes are bound to happen after the incident took place.

In addition to getting compared to a ”Karen”, many are calling her a legend for what she did and the way she controlled the entire situation.

One of the tweets read, “The girl in the blue hoodie is a hero. She stood up for all of them. Yes, maybe the way she handled it was not the best but she didn’t back down to a grown ass man trying to assault and scream at these young women. 1/2”

Furthermore, after the incident, James’ attorney came forward as he said, “deeply regretted his statement and actions during a moment of extreme emotion”.

Furthermore, the guy was also fired from his workplace.

“Our company does not tolerate behavior of this kind. We immediately investigated and have taken action. This individual is no longer employed at our firm,”, the statement read.

“His son has a life-threatening peanut allergy. Upon drinking the Robeks smoothie, his son had a severe allergic reaction which required transport via ambulance to the hospital,” the statement said. “When faced with a dire situation, Mr. Iannazzo’s parental instinct kicked in and he acted out of anger and fear. He is not a racist and deeply regrets his statement and actions during a moment of extreme emotion.”

In addition to the second degree, he is also charged with the first-degree breach and criminal trespassing. He is to appear in court on February 7th.