In her response to the allegations that she is sharing her photos on Instagram photo-shopped with various locations showing in the background, American singer and reality TV star Aubrey O’Day came up with a wild response on Sunday.

Additionally, the American singer allegedly took the background pictures from other content creators and pasted them into her picture before posting them to her Instagram account shortly after. 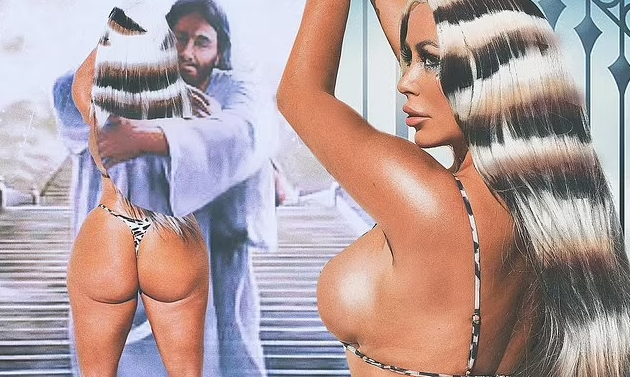 The American actress has come up with a wild response to the accusations that have been made against her in the wake of the photoshopped Jesus photo that went viral.

On Twitter, social media personality, one-time reality TV star, and Danity Kane singer, Aubrey O’Day has responded to accusations that she has posted several altered vacation photos on her Instagram feed by cheekily posting a picture of herself with the image of Jesus in heaven.

She uploaded two photos which had been altered to depict her entering the gates of paradise, embracing a man who seemed to be Jesus.

Taking to social media to share her thoughts on the situation, the social media star published a statement. Her statement began by stating that she ‘took the PJ to Heaven in the last 24 hours.. I wanted to share with y’all how beautiful it was.. also ran into Jesus and we hugged it out.’

“[N]ot that I need to explain myself, but I’ve been in this industry for over 20 years and have been traveling the world since I was 7,” writes O’Day. “If I want my Instagram to be curated like a museum of ART then that’s what the fuck is going to happen. I’m an artist, a REAL creator. I do all of my creative from my music to my flicks.. everything from my hair, glam, nails, styling, backdrops, editing, shooting, & the weather isn’t always perfect when I shoot, and I vacation alone..” 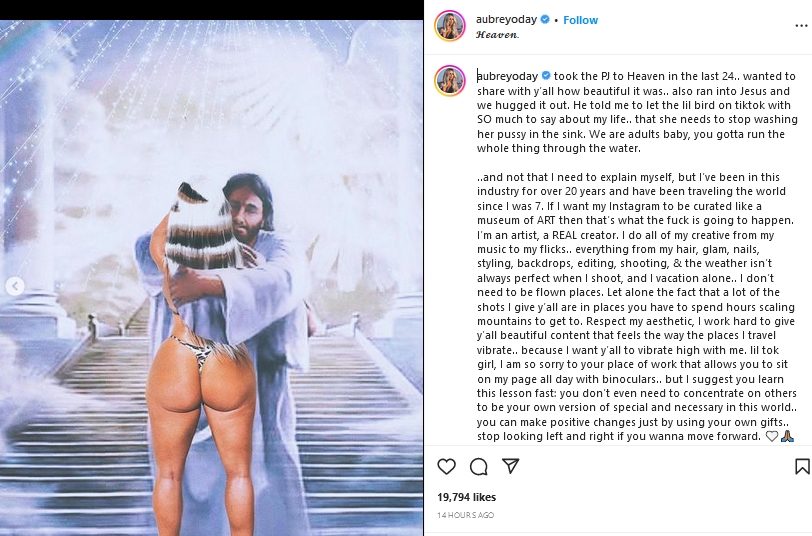 According to O’Day, “Respect my aesthetic, I work hard to give y’all beautiful content that feels the way the places I travel vibrate.. because I want y’all to vibrate high with me.”

How Did Aubrey O’Day Rose To Fame?

As one of the breakout stars of MTV’s competitive reality shows Making the Band 3 in 2004, O’Day became one of the first members of the girl group Danity Kane after she was picked on the show to be one of members.

Their first album was released in 2006 and reached number one on the Billboard 200 chart, followed by an appearance as an opening act for Christina Aguilera and the Pussycat Dolls.

O’Day began playing Amber Von Tussle in the Broadway production of Hairspray after she was fired from the band in 2008. Afterwards, she also played the lead role in the 2009 comedy American High School. She got her own reality show on the Oxygen Network in 2010 called All About Aubrey, and, in 2011, she signed a record deal with SRC/Universal Motown Records, and the show premiered in the spring of 2011. It took her less than two hours to reach the top 20 on the iTunes pop chart with her first single, ‘Automatic’, which was released in 2011. 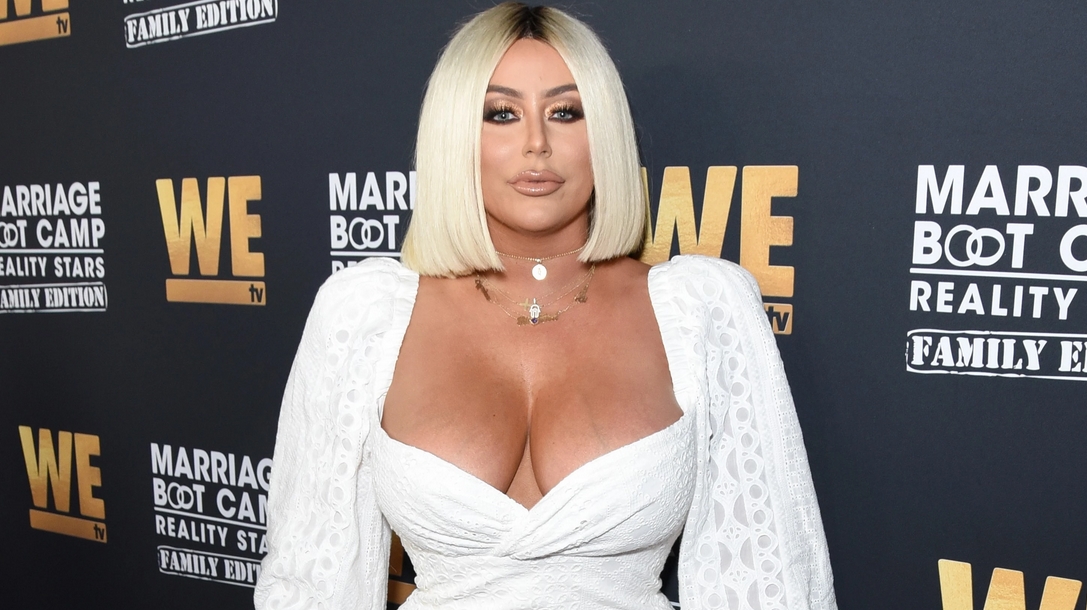 In addition to her hits with the band, O’Day has also released a number of solo songs, including ‘Wrecking Ball’, ‘Love Me When You Leave’, ‘Let Me Lay’, ‘Before I Drown’, and, in 2021, ‘Body Love High’. As well as being a part of the British Celebrity Big Brother 18 as well as the fifth season of Celebrity Apprentice, O’Day has appeared on several reality television shows, including The Famously Single Show, Ex on the Beach, and The British Celebrity Apprentice.

There has been some controversy surrounding the content of O’Day’s Instagram account recently, even going so far as to temporarily lock O’Day’s account as speculation of photoshopping escalated in the wake of recent controversy.

In response to the allegation, O’Day has finally responded and defended all her work on her Instagram page. How do you feel about her recent work? Please let us know what you think in the comments section below.