Weaponized incompetence, started as a whisper on TikTok and soon gained a lot of attention in the past few months. With more than 53.3 million views on the video-sharing site, the hashtag for this term has certainly created a buzz among Gen Z. From families, to relationships, to the workplace, people, specifically women, are speaking up about how it’s screwing them up. So what is weaponized incompetence, and how is it impacting people? 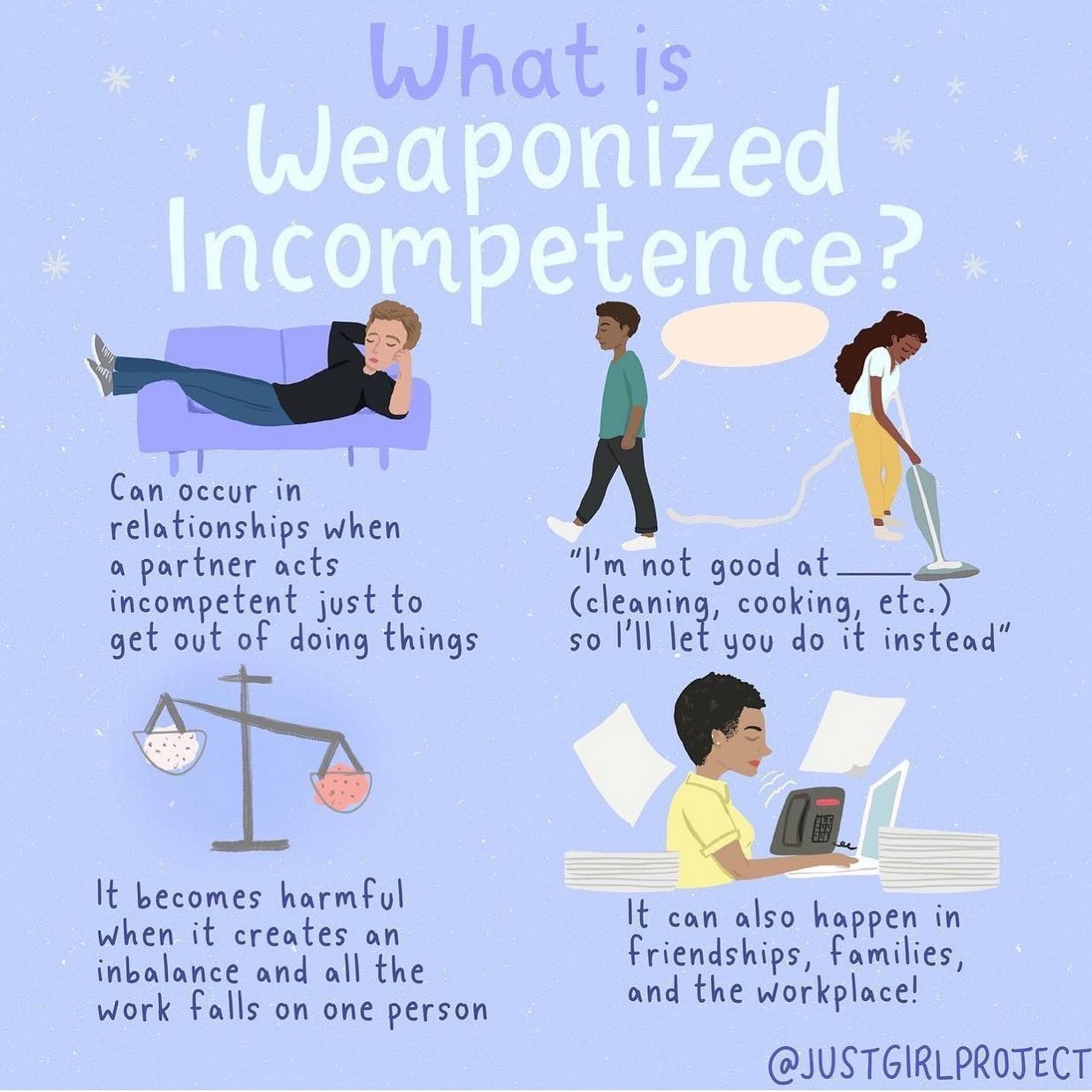 Ever heard someone making excuses for doing basic chores, and putting the burden on another for the same? Well, if you’re going through such instances, you may be a victim of weaponized incompetence. The term, first coined by Eve Rodsky, is a concept that is creating a lot of buzz on TikTok.

TikTok creators, especially women are coming forward with their stories about how the issue is affecting their mental health. Gen Z is actually speaking openly about this term, referring to “weaponized incompetence” as a reason for their screwed-up relationships. While both partners can be guilty of weaponized incompetence, it is the women who are most affected.

On TikTok user @Artmuzwolz even created a parody song created “Incompedance” to illustrate this concept. His video has received more than 2.7 million views (At the time of writing. So what does this term mean? Weaponized incompetence, also referred to as “strategic incompetence” is a tactic used by people pretending to be bad at something so they could get it done by someone else.

This manipulative tactic can be used by people in daily life chores, at the workplace, and even in relationships. However, research suggests that sometimes a person guilty of such a tactic may not even be aware that he/she is forcing their partner to pick up the slack.

To give a clearer understanding, Nadine Shaanta Murshid PhD, associate professor of social work at the University at Buffalo states: “This is something that women have been dealing with all their lives,” said Murshid. “The idea is that men are not good at certain things like domestic labor. And so, why not have women who are good at it, do it, because they’re naturally predisposed to being good at this?”

For instance, the Covid-19 pandemic put this term into a bigger spotlight when families and partners were stuck with each other 24/7. It was then that people displayed weaponized incompetence in their daily behavior. However, professor Murshid explains that while the tactic is a common phenomenon among partners, it can also happen at work and among extended family members.

“One of my coworkers knows how to use the photocopier, but deliberately pretends not to know so he doesn’t have to do the work he deems ‘beneath him’. He doesn’t have an assistant or intern, so he always asks the woman who sits closest to him to do it for him. It pisses me off every single time,” one woman spoke about weaponized incompetence at the workplace.

Are There Any Red Flags? Without doubts, yes! While partners compliment each other for being good at something, sometimes, the compliment may be used as a manipulative tactic to run away from one’s responsibility. For example, if your partner tells you, you’re good at doing dishes and keeps telling you every day to avoid the chore, you may be a victim of weaponized incompetence.

Deliberately making mistakes in simple tasks, and hence, asking your partner to do the same is another way of knowing that they may be using “Strategic incompetence” as a weapon against you. Claiming not to know something as simple as laundry is also a hint that the person is practicing “weaponized incompetence” against his/her partner.

Weaponized Incompetence: How Big Is The Impact? Researchers suggest that weaponized incompetence is actually affecting the mental health of many people. In such conditions, partners are losing trust in each other as they couldn’t have each other’s back when it comes to supporting each other. According to a McKinsey poll conducted with LeanIn.org, it has been revealed that since the onset of the pandemic, mothers are more than three times more burdened than fathers when it comes to household and parenting labor.

“The pandemic became a breaking point for domestic inequalities in adult relationships, and viral media reactions created viral conversations,” revealed Sarah Spencer Northey, a marriage and family therapist based in Washington, D.C. She further revealed, “It’s a passive-aggressive way of putting that labor back on the person you don’t respect enough to step up for.”

Northey also mentioned that the impact of weaponized incompetence over time is devastating. “It can make you feel crazy because on a surface level it looks like you’re just nagging about chores to a person who ‘defers’ to your ‘competence.’ But on a deeper level, you’re experiencing not being able to trust and turn to your partner for support,” she added.

However, it’s not just the pandemic! A Gallup study from early 2020 revealed that even before the pandemic hit the United States, even among egalitarian-minded millennial couples, “it’s gender rather than earnings that shape the division of household labor,” putting the most burden on women.

“Husbands, boyfriends and new dads tend to fall back into their fathers’ and grandfathers’ ideas about how things get done domestically: “I’ll take care of the [relatively] few tasks that need to be done outside; you handle the inside of the house and the lion share of child care,” the study suggests.

A Roseville, Calif.-based therapist, Kurt Smith revealed that he sees “the relationship pattern playing out so much, he has his own term for it: ‘Faking incompetence’.” He quotes an example: “I worked with a man who claimed he couldn’t put diapers on his child.”

“They would always fall off right away so he used this as justification for why he couldn’t help his partner change diapers,” he added. However, Kurt added that women are also guilty of “Strategic Incompetence”.

How To Deal With Weaponsied Incompetence? What seems like a small issue, may really trigger people’s relationships. Many therapists have revealed that “weaponized incompetence” has a lot to do with people’s upbringing. Many women have revealed that it happens because men are used to being coddled by their mothers, and they expect the same from their partners. But that’s just one of the many examples.

If you’re wondering how to cope with weaponized incompetence, here are some important points to consider as suggested by Nadine Shaanta Murshid:

Well, it is very much possible to change weaponized incompetence into competence. One has to be aware of their partner’s feelings and make a gentle approach to change such negative behavior.

Draw your boundaries and make sure you’re not overworking yourself which will eventually lead to burnout. I’d suggest: “Be a team!”. Have you ever been a victim of weaponized incompetence? Share your stories with me.