“Yellowjackets” is a real hit and Showtime is ensuring that the thrill keeps coming in for its fans. The hit survival drama series is renewed for Season 3. The news was announced on Thursday (Dec. 15), confirming the news that “Yellowjackets” has scored a Season 3, months ahead of the Showtime hit series’ anticipated return with season 2 on March 26, 2023. The Woods Have A Way Of Calling You Back!

The woods have a way of calling you back. #Yellowjackets is renewed for Season 3. pic.twitter.com/7e3LPzlBle

Yellowjackets has scored an early renewal by Showtime! The news was announced on Thursday via Twitter: “The woods have a way of calling you back. #Yellowjackets is renewed for Season 3.” In the video posted along with the news, a foggy glass forms digit three, which looked really spooky. Nothing else has been revealed yet.

The hit survival drama series recently had an official (and ominous) teaser trailer for “Yellowjackets” Season 2, stating that the series is slated to return in March 2023, and now, it has been confirmed that fans will have a Season 3. Chris McCarthy, President/CEO, of Showtime and Paramount Media Networks, stated:

“With Yellowjackets‘ runaway success in season 1 and the pent-up anticipation for season 2, we wanted to maximize the momentum by fast-tracking season 3 now. The show’s ambition is only exceeded by its execution, and I thank the incredible creative team behind it, including Ashley [Lyle], Bart [Nickerson], Jonathan [Lisco], eOne and the Showtime team, for turning this into such a success.”

Yellowjackets quickly became one of the buzziest shows of the year following its November 2021 premiere. The Showtime series revolves around characters like Misty (Christina Ricci), Natalie (Juliette Lewis), Shauna (Melanie Lynskey) and Taissa (Tawny Cypress). While not much has been revealed about the additional cast or plot, fans can enjoy Season 2 as it premieres Sunday, March 26 at 9 p.m. ET/PT on Showtime. Yellowjackets fans couldn’t be happier because Season 3 would be making its way soon after Season 2. As for the upcoming Season, no details have been released regarding the Season 2 plot, but one thing seems clear. Though Jackie (Ella Purnell) froze to death at the end of season 1, some viewers aren’t ruling out a potential return. What we can tell is that Season 2 will have a new queen bee hierarchy afoot with some surprises.

For instance, which of the 1996 Yellowjackets teen soccer champs survive to present-day? What happened to Shauna’s baby? Is Jeff in on the cannibal secret? And what the hell is going on with Lottie’s present-day cult? and a lot more. Season 2 will surely unravel many of those fan theories out there. 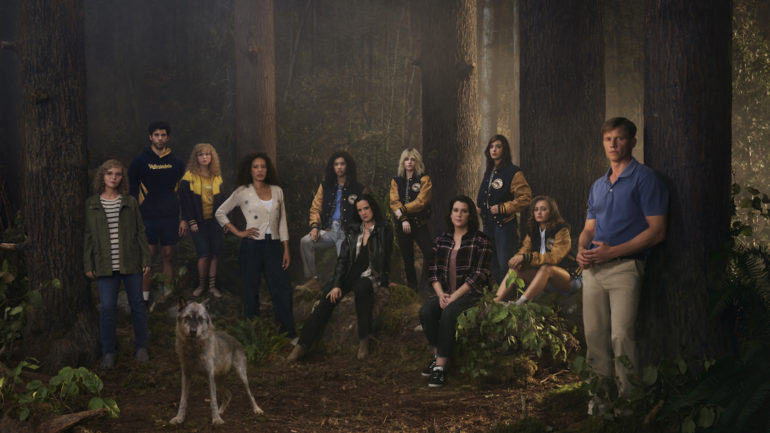 Yellowjackets Season 2 premiers on Showtime on streaming and on-demand for all its platform subscribers on March 24, 2023, before making its on-air debut on March 26, 2023, at 9 p.m. ET/PT. You can find the full list of cast members below, and yea, there are some new faces too!