Will Smith Recalls “Horrific Night” Of Oscar Slap, Discusses The History Behind “Emancipation”

A lot changed in Will Smith’s life since the Oscar scandal. From being subjected to some mean memes, to roasting, to undergoing therapy, the Oscar-winning actor has maintained a relatively low profile. Now, Will Smith appeared on “The Daily Show” and spoke at length about the scandal. He also shared about his role in “Emancipation”. Read on to learn more about his thoughts. “I flew 30 hours to be here,” Will Smith said while kicking off his conversation with Trevor Noah on “The Daily Show”. The Oscar-winning actor revealed that he has just come back from Bhutan for The Nat Geo show. “What were you doing there?” Trevor asked. On this, Will responded that he’s been travelling around the world, finding the secrets of life, but of course, hasn’t found them yet.

When asked about his trip to the South Pole, Will replied, “I don’t know if I am allowed to speak about it, but the show is called “Pole to Pole”. So, we’re going from the South Pole to the North Pole and all the stops along the way…It’s called Other People’s Wisdom. So we’re seeking wisdom from travelling.”

Quick fact check! Will wasn’t entirely wrong as William Smith, an English captain born in Blyth, Northumberland, discovered the South Shetland Islands, an archipelago off the Graham Land in Antarctica. His discovery was the first ever made south of 60° south latitude, in the present Antarctic Treaty area.

If you aren’t aware, Will Smith will star and executive produce a series titled Pole to Pole, which will stream on Disney+ as part of the Nat Geo hub. As the title implies, “the show will follow Smith and his film crew as they go on a 26,000-mile trek from the South Pole to the North Pole, crossing all of Earth’s biomes and spending time in communities along the way.” The show will film over more than 100 days, however, a premiere date is yet to be announced. This was Will Smith’s first return to late-night television on Monday (Nov. 28) when he appeared on The Daily Show With Trevor Noah for the first time since he slapped Chris Rock on the Dolby Theatre stage at this year’s Oscars. When asked about his journey since the slapping incident, Smith began by saying that it was “a horrific night.”

“[There are] many nuances and complexities to it, you know, but at the end of the day, I just, I lost it, you know,” Smith told Noah. “I guess what I would say, you just never know what somebody’s going through,” he continued.

Will explained that he was going through something that night, not that that “justifies my behaviour at all.” “You’re asking, what did I learn? And it’s that we just got to be nice to each other man,” Smith said.

When Noah shared that a friend called him asking if he felt he saw the real Smith onstage on the Oscar night, Noah disagreed, stating that he thought the actor “just stood up for the wrong thing at the wrong time”e. The Daily Show host continued that things were becoming “relentlessly shitty” and Smith reacted for the first time. “It was a lot of things,” the actor said. “It was the little boy that watched his father beat up his mother, you know, is that you know, all of that just bubbled up at that moment. You know, I just that’s not who I wanna be.”

When Noah told Smith he thinks he made a mistake and doesn’t define him as an actor, the audience cheered for the Academy Award-winner. Later in the conversation, Will explained that “he had a lot of rage that had been bottled up for a long time.” He even stated that he has to forgive himself for being human.

Will concluded, “..and I had to humble down, you know, and realize that I’m a flawed human, and I still have an opportunity to go out in the world and contribute in a way that fills my heart, and hopefully helps other people.”

The altercation between Chris Rock and Will Smith started when the comedian cracked a joke about Will’s wife Jada Pinkett Smith’s bald head. Smith then ran on stage and slapped Rock. He yelled, “Keep my wife’s name out of your f**king mouth!”. After a few moments, Will Smith won the Oscar for best actor category for his role in “King Richard” movie.

While receiving the award, Smith has tears in his eyes. In his speech, he apologized to the Academy and his fellow nominees for his reaction however he did not address Rock. Will Smith has since been banned from the Academy for the next 10 years for his inexcusable behaviour.

The History Behind ‘Emancipation’ ITrevor Noah congratulated Will Smith for his movie “Emancipation”, and said: “It is so hard to describe movies like this because people see it in the clip, but you play one of the most famous unknown people, you know what I mean.” Trevor explained how a man’s picture went around the world to show “how brutal slavery is”.

On his role in Emancipation, Will Smith explained, “When I read this script, man, it’s like, you’ve probably seen the image. It’s of a Black man and it’s his back and his arm and he’s sitting. It’s such a famous picture.” Trevor even revealed the picture to the audience. Will continued that when he saw the image for the first time, it got him really excited to explore it.

“When you see this image, you don’t know what the story is, and when I started doing my research, I got reminded that American slavery was one of the most brutal aspects of human history,” he expressed. “It was something, you know, very incomprehensible,” he explained. When he read it, he realised that it’s so hard to understand the level of human cruelty. 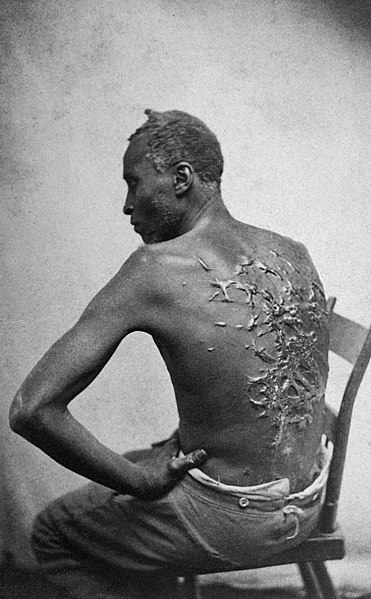 As for the movie, Will revealed that the screenplay was spectacular. Explaining the title, Wil Smith stated that slaves weren’t free until June 19th so the period of Emancipation, which is 1865…slaves were freed on January 1, 1865, but the South refused to allow the slaves to be free. “So the enslaved people started trying to run to get to Lincon’s army,” he explained. It’s an irony because when they were running toward Baton Rogue, it was the period when slaves were free but they weren’t being freed.

In the movie, a “runaway slave forges through the swamps of Louisiana on a tortuous journey to escape plantation owners that nearly killed him”. Directed by Antoine Fuqua, the movie stars Will Smith, Ben Foster, Charmaine Bingwa and Gilbert Owuor. The movie is set to release in theatres on Dec. 2 and stream on Apple TV+ on Dec. 9.