Who Can Be Queen Cobra on ‘The Masked Singer’?

The seventh season of the show The Masked Singer has been full of twists and turns. Till now, many of the early costumes have been disclosed. We must say with each episode the show keeps getting more exciting. What is the show ‘The Masked Singer’ all about?

For those of you who have no clue about the show The Masked Singer, let us tell you what is it all about. It is an American singing reality show that is based on the Korean format of King of Mask Singer.

All the contestants present in the show are celebrities who take over the stage in vibrant costumes from head to toe. The real identity of the performers is kept a secret from the host, panelists, audience as well other contestants until they are evicted from the show. Season 1 of the show The Masked Singer premiered on Fox on January 2, 2019. Nick Cannon hosts the singing show. Ken Jeong, Jenny McCarthy Wahlberg, Nicole Scherzinger, and Robin Thicke come in each episode and vote alongside the audience for their favorite singer and the contestant with the least number of votes gets eliminated.

All about the costume of Queen Cobra

This year, all the performers have been divided into three groups: The Good, The Bad, and The Cuddly. When we talk about Queen Cobra, she belongs to The Bad. The clues that have been swirling in the air state that she is not what she seems. The outfit of Queen Cobra is pretty cool and amazing at the same time. We must say kudos to the designer for being so creative with the costume and the mask as it just screams royalty. The purple, blue and pink gown is full of rhinestones. It looks perfect as a picture.

All of us have been thrilled by the costume of Queen Cobra. The big question is who’s the celebrity behind the mask. Throughout the show, we have witnessed that Queen Cobra has a beautiful voice.

Let’s take a look at the clues of Queen Cobra from her first performance.

Who is Queen Cobra?

As of now, the fans have made a few guesses about the identity of Queen Cobra. Some fans think it is Halle Berry, a few think it is Catwoman Zoë Kravitz behind the mask and others believe it is Teri Hatcher. The viewers tried to connect the clues to find out who Queen Cobra is. 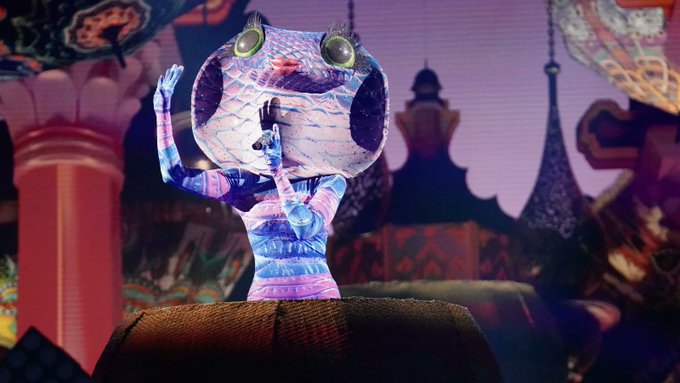 When we ponder over the guesses that have been made by the judging panel, they have different names in mind. The guesses of the judges are as follows: Jada Pinkett Smith and Willow Smith, Brandy and Monica, and Anne Hathaway.

Do you know who is Queen Cobra? If you do let us know in the comments section below. Don’t forget to stay tuned with us for the latest updates from the world of showbiz.