Katy Perry ripped her leather pants on American Idol. No, she isn’t embarrassed. The Firework star handled the situation in a sporting manner. She called out for a tape and hilariously got the ripped area covered.

ima get ur heart racing in my skin-tight jeans on #americanidol tonight 👀 tune in now for a RIPPING good time 🤪 pic.twitter.com/gw3bav78Rs

Katy Perry is one of the judges of American Idol. The 37-year-old star was wearing a pair of sexy leather hot pants and an animal print top. Her bottom split as she bent down. Yea, she was performing her 2010 hit Teenage Dream alongside Luke Bryan.

Katy’s fellow judge Bryan shouted, ‘They busted’ while another co-host Lionel Richie said, “The concert is officially over.” Katy didn’t lose her calm and immediately called for assistance from crew members. Katy asked for ducting help and everyone helped her cover the exposed area. The crew wrapped herself with duct tape in a T-shaped. Katy is a sporty human and it isn’t the first time that she suffered a wardrobe malfunction.

After the incident, Katy sportingly tweeted, “ima get ur heart racing in my skin-tight jeans on “American Idol” tonight. Tune in for a RIPPING experience.” Well, that’s more like Katy. in 2018, she tweeted, “I can promise you some pants splitting fun”.

Katy had a similar “pant-splitting” incident on American Idol in 2018. She ripped her pants when she got too excited and followed contestant Maddie Poppe’s duet with Colbie Caillat. Here’s a throwback of the incident:

I have good news and bad news today – ☹️: I won’t be able to live stream #AmericanIdol today but 🙂: I CAN promise you some pants splitting fun👖😳 Tune in at 8/7c for round✌🏼 of 🌟All Star🌟 duets! pic.twitter.com/AaqCakSLdT 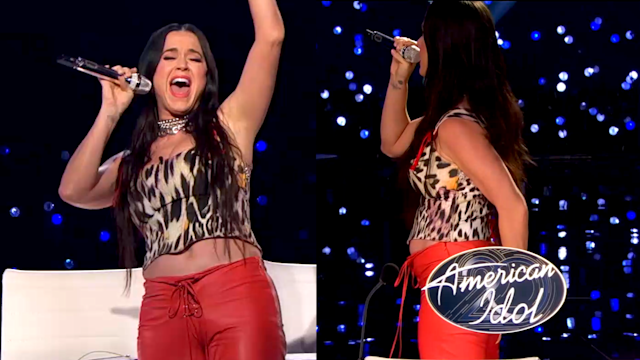 Fans adore Katy Perry. Many renowned magazines have described Katy as the sex symbol, “full-on male fantasy and “serious popstar/woman/sex symbol. Many say Katy’s body is like a sketch of a teenage boy.

Perry has received immense fame during her career. The Queen of Pop became the first person to gain 100 million Twitter followers in 2017. She even holds the 2015 Guinness World Record for most Twitter followers.

Perry was ranked five times by Forbes on their “Top-Earning Women in Music”. Forbes also listed her among the “World’s Highest-Paid Musicians”. Currently, her net worth stands at $285 million.

Katy rose to fame with her second album “One of the Boys” in 2008. She has given the world many hits like “I Kissed a Girl”, “Teenage Dream, “Firework”, “Last Friday Night”, “Part of Me” and a lot more.

She recently won a $2.8 million copyright infringement case for her album “Dark Horse” against Christian rapper Marcus Tyrone Gray. She is truly a marvellous person in her personal life.

Katy has tirelessly worked towards the improvement and welfare of the lives of children. This made her the official UNICEF Goodwill Ambassador. She even donated all profits for sales of her album “The Gay Nineties Old Tyme Music: Daisy Bell” to “Little Kids Rock”.

The charity supports musical education in underprivileged elementary schools. Katy wasn’t looked down for her wardrobe malfunction. She is loved by her crew and fans. The pop star handled the situation in a sporting manner. Thanks to her supporting fellow judges. What do you think about this incident?