The representation of South Asian-Americans in the media can correctly happen only if we have actors paving the path for the same. While fabulous television heroes such as Mindy Kaling, Kunal Nayyar, Aziz Ansari, Aasif Mandvi, Hasan Minhaj, Hannah Simone are well-known now, their success and talent have opened up gateways, at a slow pace nevertheless, for other actors to bring their A game into the industry.

Here are some of the faces you should definitely keep an eye out for.

Dayal began his kickass acting journey with commercials for McDonald’s, Nintendo, and Dominos. His progression into television came with guest appearances on “CSI: Crime Scene Investigation,” “Rubicon,” “The Good Wife,” and “Switched at Birth.”

His role as Raj on the teen show “90210” and starring in the feature film “Walkaway” put him in the spotlight. Obviously, this was just the beginning. With other big films like “The Hundred-Foot Journey,” and “Viceroy’s House,” he’s pretty much nailed himself to the wall of success.

His new drama “The Resident” will premiere on FOX in early 2018. He plays a medical intern thrust into the chaotic world of his hospital.

Bala has graced our screens through stints on the various big name shows like “Grey’s Anatomy,” “Will & Grace,” “The Walking Dead,” “CSI: NYI” before his regular role in “Notes from the Underbelly?”

“Meet the Patels.” However, his most noticeable credit includes his role on the final season of “Castle” as FBI analyst Vikram.

Not only does Ambudkar have an extremely fun presence on-screen as an actor, but he also kills it in his podcasts, which feature other TV celebrities. He is mostly recognized for playing Rishi Lahiri on “The Mindy Project” as Mindy’s younger brother.

His work includes some brilliant acapella singing as seen in “Pitch Perfect.” His other feature films are “Ride Along 2,” “Basmati Blues,” and “The Muppets.”

He will next be seen in Fox’s upcoming series titled “Eat, Pray, Thug,” which is based on real life rapper Heems. He also stars in Hulu’s upcoming anthology, “Dimension 404.”

Bishil started acting at the young age of 14, so she’s obviously kickstarted her career early on. She appeared on several children’s shows, including Nickelodeon’s “Just for Kicks.”

Her big break came with Alan Ball’s movie, “Towelhead,” which earned Bishil a ton of rave reviews and a Young Hollywood Award. She has appeared in other films like “Crossing Over” and “The Last Airbender.” On the smaller screen, she had stints on “Drake & Josh” and “Hannah Montana” as a kid, and more recently, she was the lead in ABC’s short-lived show “Lucky 7.”

Currently, she stars as Margo on the Syfy show “The Magicians.” She will be  seen in the upcoming movie “Under The Silver Lake.”

You guys. I had the BEST time at #StarWars #CelebrationEurope! I’ve said it before & I’ll say it again: Star Wars fans are the best in the world. I feel so lucky to get to be a part of such a loving & supportive family! Till we meet again! 💓🙆😍

Sircar has an impressive roster of movie credits including “17 Again,” “Friends with Benefits,” and “Hotel for Dogs.” Her claim to fame, however, was playing Neha Patel in “The Internship” alongside Vince Vaughn and Owen Wilson. She can also be seen in “Miss India America” alongside “New Girl” actress Hannah Simone.

On the television side, she’s had appearances in “The Vampire Diaries,” “Witches of East End,” and “The Crazy Ones.” She has a developing career as a voice-over artist, lending her voice to shows like “Star Wars Rebels” and “Walking with Dinosaurs.”

Currently, she stars in NBC comedy “The Good Place” opposite Kristen Bell and Ted Danson. Plus, she’ll star opposite Zach Braff in the upcoming ABC comedy “Alex, Inc.”

Vadsaria got her big break in Hollywood with a role in the TV show “Vanished,” which led her to a starring role in popular Freeform (previously ABC Family) show, “Greek.”

From then on, she’s appeared on several shows such as “Bones,” “Castle,” and “Melissa & Joey.” Her role on ABC drama “Revenge” as Padma Lahari for several episodes earned her even more recognition.

She also starred alongside Aziz Ansari and Jesse Eisenberg in the film “30 Minutes or Less,” where she played Ansari’s sister.

Most recently, she played the lead in ABC’s short-lived show “Second Chance.”

Gavankar is a familiar face due to appearances in several television shows including “The L Word,” “Grey’s Anatomy,” “Dollhouse,” and “NCIS.” She’s also a singer and has done a cover of Kanye West’s “Love Lockdown,” and was signed to Cash Money Records Universal Records. Her official music video for her single, “Waiting for Godot,” won several awards at film festivals.

Her bigger roles in TV shows like “True Blood,” “The Vampire Diaries,” “The League,” “Arrow,” and “Mysteries of Laura,” and most recently, “Sleepy Hollow.”

Gavankar was the first actor to sign up on Twitter and the personification of Microsoft’s search engine named Dewey. She’s played characters on video games like “Far Cry 4.” Plus, she’s done her fair share of movies including “White Orchard,” “Cortex,” and “Sidney Hall.” Yeah, we know, she’s really the jack of all trades.

Notable Credits: “Outsourced,” “A to Z.”

I hugged my @uber driver goodbye. That’s how grateful I am to be leaving this fucking cold in Chicago/Naperville and get home to my wonderful Los Angeles. I swear. Every visit to the Windy City makes me grateful for why I left it. #sorry #idoloveChicagoifmyfamilyactuallylivedinthecityandnotthesuburbs #Naperthrillaintthatbad #butthesewhiteRepublicansbecrazy #bedwettingliberal #toomanyhashtags #gay #gaycub #actorslife

Cheena has been a part of the industry for over ten years now. From his movie debut with “Barbershop” to playing Dr. Agbo in “ER,” he has appeared in numerous on-screen projects including movies like “The Ode,” “Just Before I Go.” However, it’s his television characters that made him a known figure.

With minor appearances in famous shows like “The West Wing” and “Brothers & Sisters,” Cheena’s famed role came with playing Gupta on “Outsourced,” “Sean Saves the World,” and “A to Z.”

Beyond his acting, Cheena is openly gay and an advocate for LGBT rights.

Yes, he’s the “did it hurt when you fell from heaven” guy from the AT&T commercials but trust us, he’s on a path to total fame.

Soni had roles in films like “Safety Not Guaranteed” and “Supremacy” but he came into the spotlight in early 2016 for his small but significant and funny role in “Deadpool.” It’s only been an upward journey since then with his roles in “Ghostbusters,” and “Office Christmas Party.” He’s expressed interest to work with Karan Johar in Bollywood films. Make it happen, KJO!

Some of his upcoming movies include “Unicorn Store,” “Office Uprising,” and “Rock That Body.”

Jaffrey has been in the industry for over 20 years now.

Her first movie role was in the 1988 movie “The Perfect Murder,” in which she worked alongside her father. Since then, she’s done several films including “Revolution No. 9,” “The Ode,” “The Nanny Diaries,” and “The Domino Effect.”

Jaffrey’s many TV credits have won her the fame she has now. Starting with a role on “Law & Order,” she’s had parts in “Sex and the City,” “Heroes,” “Girls,” and “Madam Secretary.” Her first major role as Dr. Hickman in “Third Watch” and her part on “House of Cards” as Linda Vasquez for two seasons are synonymous with her now.

Since then, she’s appeared as a sheriff on “Sleepy Hollow,” “Mr. Robot,” and “The Mindy Project.”

Currently, she portrays FBI agent Denise Christopher on the time-traveling drama “Timeless.” She will next be seen on the big screen e in “Behold My Heart,” and “Yeh Din Ka Kissa.” 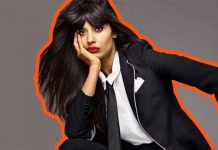