Indian comedian Vir Das is having a momentous couple of years. His standalone special on Netflix was released in 2017 and the streaming platform has ordered two more specials, which Das is filming in the United States this summer.

Earlier this year, he was cast in the ABC drama “Whiskey Cavalier,” a high octane interagency drama starring Scott Foley and Lauren Cohan. It will premiere in early 2019

May 1979: Das was born in Dehradun, India. He moved with his family to Lagos, Nigeria, when he was a year old when his father got a job there. Years later, when tensions got high there, they moved to New Delhi.

1999: After completing his education in India, Das moved to the U.S. to study economics and acting at Knox College in Galesburg, Illinois. It was here that Das debuted his very first comedy special titled “Brown Men Can’t Hump.” It led him to a teacher’s assistant job for the class Beginner’s Acting. He also went on to do a six-month method acting program at Harvard University as well as an education at the Moscow Arts Theatre.

Early 2000s: He graduated a few months after 9/11 and worked four jobs in Chicago while trying to find acting work.

2003: Das returned to India and for a stand-up show that did really well. This was the boost he needed. He went on to host television shows on various Indian television networks like Zoom, Star One, CNN-IBN, CNBC-TV18. In the mid-2000s, Das also hosted over a 100 successful comedy tours all across India.

2006: He landed a small role in the Hallmark movie “The Curse of King Tut’s Tomb.” Das played Jabari.

2007: Das decided to pursue being a comedian full time,  working on touring specials like History of India and Walking on Broken Das. He wrote and created a DVD for “Battle of Da Sexes,” which is what helped him get proper Bollywood roles. Before that, in 2007 itself, Das had cameo appearances in the films “Namastey London” and “Mumbai Salsa.”

2009-2011: In a span of three years, Das did three big production Bollywood films. “Love Aaj Kal” by director Imtiaz Ali, which starred Saif Ali Khan and Deepika Padukone. He played a role as one of their friends. Following this, he had “Badmash Company” by mammoth Indian production company Yash Raj Films. Das had a notable role in the film opposite Shahid Kapoor and Anushka Sharma. His third big film was “Delhi Belly,” produced by superstar Aamir Khan. All three films were of varying genres, giving Das a chance to prove his comedic range.

2013-2016: Das continued to build his roster of Bollywood films over the next few years. He appeared in “Go Goa Gone,” “Shaadi Ke Side Effects,” “Revolver Rani,” “31st October,” and “Shivaay” among other films. All the while, he continued with his stand-up shows, as well.

April 2017: His first special on Netflix, “Abroad Understanding,” is released, making him the first Indian comic to have his own comedy special on the platform.

June 2017: After a remarkable comedy journey in India and in the U.S., Variety names him in the ‘10 Comics to Watch.’ Also on the list were Hasan Minhaj and Tiffany Haddish.

Oct 2017: According to reports, Das began developing a comedy pilot for Hulu along with “The Goldbergs” producer Doug Robinson. Titled “In Theory,” the show revolves around an Indian DJ who moves to a small Midwestern town and becomes obsessed with completing his late father’s work, a complex thesis called Theory of Happiness. Hmm, sounds somewhat familiar?

Feb 2018: Das was cast in the ABC pilot “Whiskey Cavalier” as FBI agent Jai Datta. The drama stars Scott Foley as CIA agent Will Chase and Lauren Cohan as FBI agent Francesca Trowbridge. The two are ordered to form their own team for covert missions across the world. Frankie chooses her one and only friend Jai to join the team. Jai is obviously intelligent, suave, and cares for the finer things in the world.

May 2018: ABC officially orders “Whiskey Cavalier” to series, setting it for a spring 2019 premiere. This will be Das’s first series regular role on American TV.

June 2018: Das returns to his alma mater Knox College to give the commencement address to the graduating class. In his speech, he recalls his own time studying here, gives advice to the students, and of course, adds a big touch of his trademark humor.

Summer 2018: Over the next few months, before officially shooting for “Whiskey Cavalier,” Das is performing his stand-up shows in Mysore and Lucknow in India and in San Francisco as part of his two upcoming Netflix specials.

We’re pumped to see Das, who is clearly very funny and also outspoken about political issues in India and the U.S., gaining fame on this side of the world. 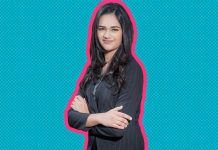