The Rings Of Power: Cast and Character Guide is Here

According to the audience, the Lord of the Rings: The Rings of Power series is doing quite well. The show will consist of eight episodes and will premiere on September 1, 2022, and will conclude on October 14, 2022.

The narrative of the show takes place in the Second Age of Middle-earth, thousands of years before Tolkien’s The Hobbit and The Lord of the Rings.

Along with the astounding narrative, spectators are captivated by the show’s characters. They are actually gaining a lot of attention, and a number of them are great performers. Do you want to discover more about their roles? This appears to be an interesting guide. 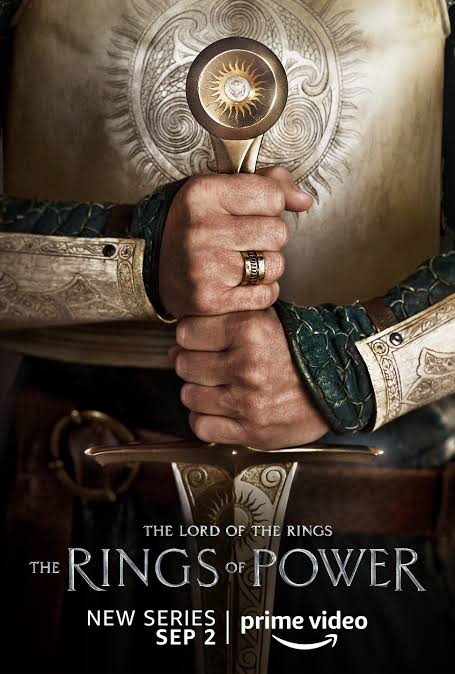 ‘The Rings Of Power’ Character Guide

Many of the personalities discussed their character and how it can be outlined. Every character in the show contributes significantly to the storyline with their own outstanding performance. Let’s know everything there is to know about them.

Let’s begin with the lead ones. Galadriel is an Elven warrior who appears to believe that evil is on its way back to Middle-earth. Galadriel was described by Tolkien as a powerful fighter of “Amazon disposition” in her youngsters.

And the series depicts her voyage from that spot to become the “elder stateswoman” that the personality is more generally known as.

Morfydd Clark described her character as, “My friends are all massive ‘Lord of the Rings fans, and I have to tell you, they describe her to me a lot. They’re asking all the questions that all the fans are. I would describe her as older than the moon. She’s a living myth. A living legend.” Elrond is a politician and half-Elven architect All through the series, Elrond transitions from optimistic and eager to world-weary and closed-off. He is good friends with Galadriel, but he has his own goals.

Robert described his character as, “He’s our youngest elf. If we were his age, we’d be dust and bone, but in eleven years, he’s young. He’s trying so hard to be an elf and to embody what that means. He’s not yet reconciled with his past. He’s got a complicated relationship with his dad, with what he achieved. 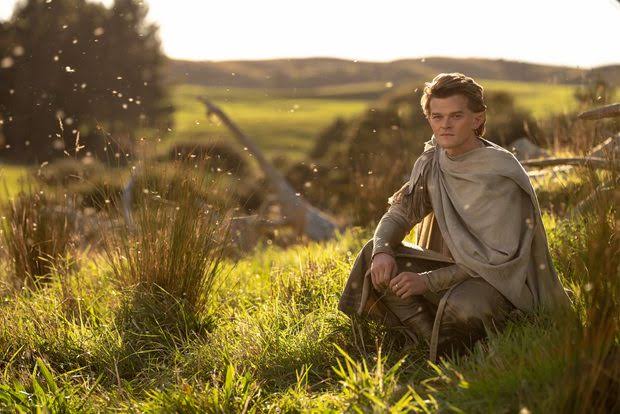 Walker stated that the character is discussed in Tolkien’s The Lord of the Rings in a poem called “The Fall of Gil-galad,” and that the series would broaden on that. He emphasized the character’s “odd gift of foresight.

“Everyone knows Gil-galad from that song that Sam sings, but there isn’t a wealth of information about him in the text,” Walker explains.

“My favorite part is that he has this odd gift of foresight. He’s prescient, and he’s ahead of the curve. He can kind of feel the pulse of evil rising. He’s attuned to the life force of Middle-earth, and he’s chosen to stay.” 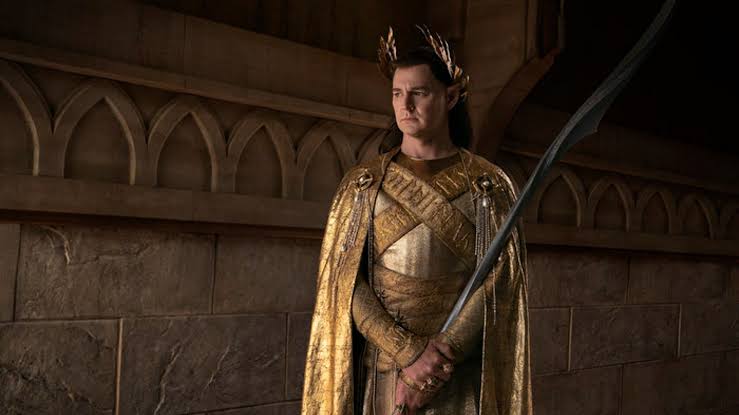 Similar to Tolkien’s love stories about Beren and Lúthien and Aragorn and Arwen, a Silvan Elf with a forbidden romance for the human healer Bronwyn.

Ismael talked about his character and stated, “I found it freeing, and quite liberating. It made it feel more like it was an indie film, in a certain way, because I had a voice. I had a voice that I never thought I was going to have to do Lord of the Rings.”

“There are so many qualities to the role, but being a non-canon character, there’s also a boundless possibility,” explains Córdova. Adding, “It just felt like a fertile landscape to create.” 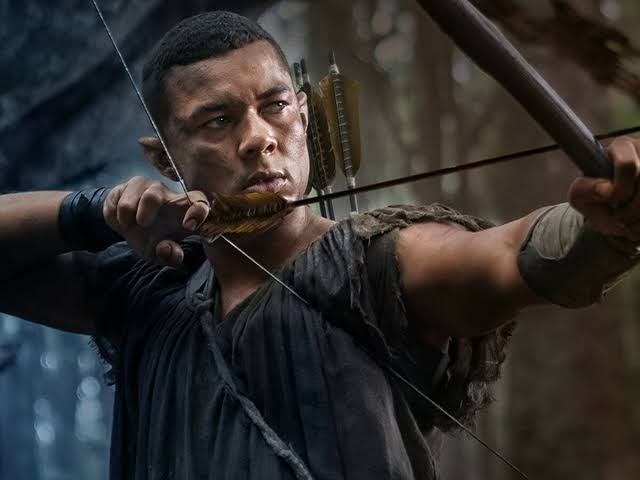 Celebrimbor is the Elven smith who forges the Rings of Power; he is a “brilliant artisan” recognized all through Middle-earth and is mates with the Dwarves of Khazad-dûm.

Charles described his character as, “He’s a Lord of Eregion. He is also the most famed jewelsmith of his time. His grandfather was Fëanor, who was also a famous jewelsmith, but he was not a good guy. His father is Curufin, also not a good guy.

The only thing that Tolkien gives us as far as how Celebrimbor turned out, at least with regards to his father — he said, ‘He was of a wholly different temper to his father.’ That’s all we get. I’ll also say that we discover him whilst he’s pursuing with great frenzy this project of his to build a wonderful tower, and forge in the center of Eregion on to draw wonderful creative talents from all races in an attempt to recreate a Valinor in Middle-earth. 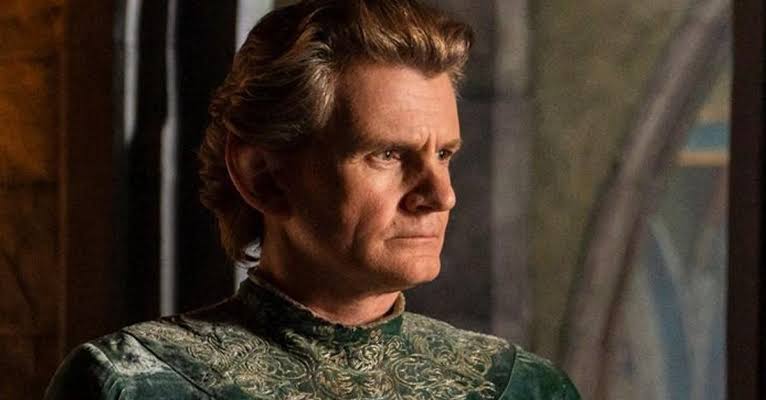 I also found him when I read the script at a point of uncertainty about his own abilities, about his own validity. That indecision is possibly what might make him vulnerable, ultimately, to predators.”

The writers wanted to go deeper into Isildur’s narrative than the primary source did so that the spectator felt it ended in tragedy rather than utter stupidity. He is a Númenórean sailor who will eventually become a warrior and king.

Isildur described his character as rebellious.“I would describe him as a little bit of a rebel without a cause. Someone who wants something new. He wants to be stimulated and inspired, and there’s a lack of inspiration where I am.”

He is an elder of the Harfoot. “The traditional Tolkien little guy… the little people in this world provide comedy but also get to be incredibly brave,” Henry said of the Harfoots.

Henry stated, “We’re a nomadic tribe, moving with the weather and the fertility of the crops. We have big caravans on wooden wheels and we’re very good at hiding things because humans are much bigger than us and bring trouble.” 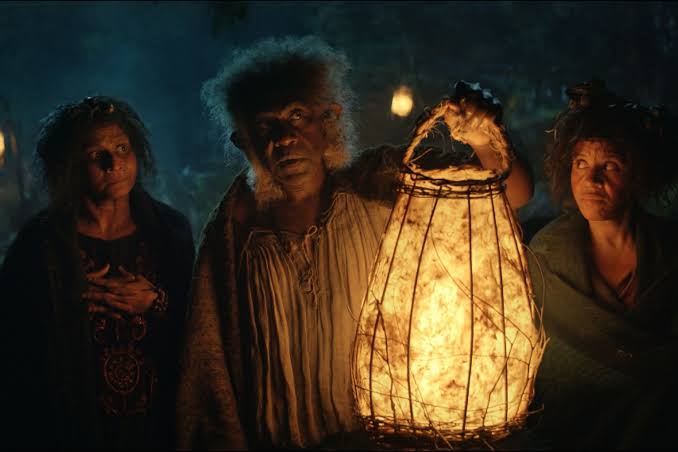 He is the prince of the Dwarven city of Khazad-dûm. Arthur described his character as, “He is a fiery man. I’d like to say he’s fun. I’d definitely want to go for a pint with him. He’s one of the guys who would crack jokes in the pub.

But at the same time, after he’s passed a certain amount of alcohol, I’m sure he would turn into a different kind of person. He might become a liability, and that kind of short-tempered man who won’t take any rubbish off anyone.” 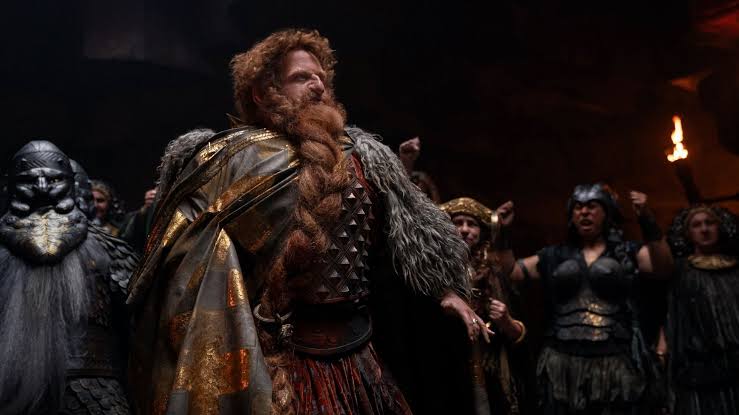 She is the princess of Khazad-dûm, a Dwarven city. Disa and the remaining female Dwarves have facial hair, but not as thick as the male Dwarves in the series.

Sophia described Disa by saying, “She is a mother. She is the wife to Prince Durin IV. She uses her voice to literally move mountains, communicates with the earth around her, and understand her kingdom and the elements. She’s a formidable ball of fun, I think.” 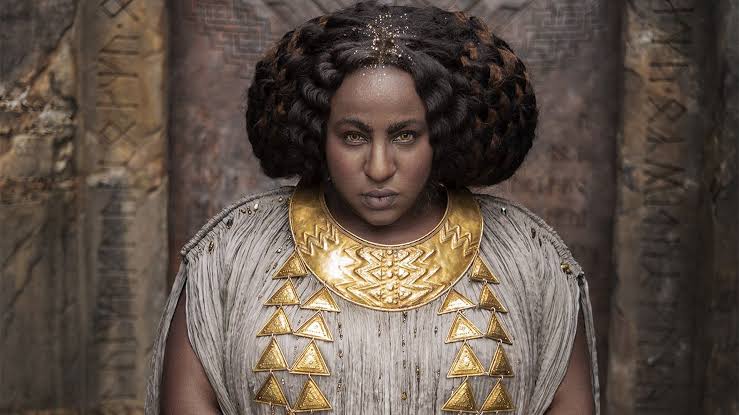 She is a Harfoot with a desire for adventure. “She’s a really resolute, inquisitive, and curious harfoot,” Kavenagh teases. “She leads with the idea that the fear of risk can be greater than the risk itself.

Sometimes her risk-taking can put other people in danger. But, ultimately, she does it with the best of intentions.”
Markella stated of her character, “I play Nori Brandyfoot, and she is a very resolute, very curious, inquisitive Harfoot who is just balancing a dedication to a family with a real interest in adventure. 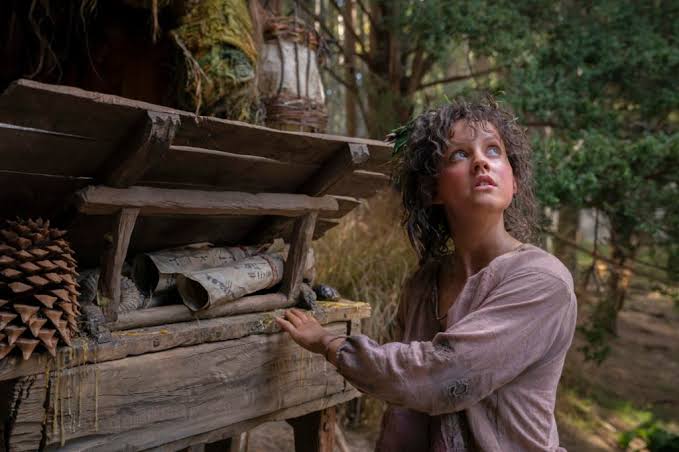 She is currently grappling with that inner conflict, and wants the two worlds to just coexist: She wants to help them find a home, and she believes that you need to step outside of your comfort zone to do that.

And she’s met with resistance a lot of the time, but she gets through it. She leads with a lot of love, even though she’s very irritating at times — she shows the best of intentions.”

She is a curious Harfoot. Megan stated, “I play Poppy Proudfelow. She is a very cautious and observant harfoot. The harfoot community has a very specific set of rules in order to ensure everyone’s safety and survival, and those really resonate with Poppy, which makes her dynamic with her best friend, Nori, interesting.

She’s very strong-minded and strong-willed. She doesn’t do anything she doesn’t want to do, so she’s not just following Nori along. They are the yin to each other’s yang, which has been really exciting to explore.” 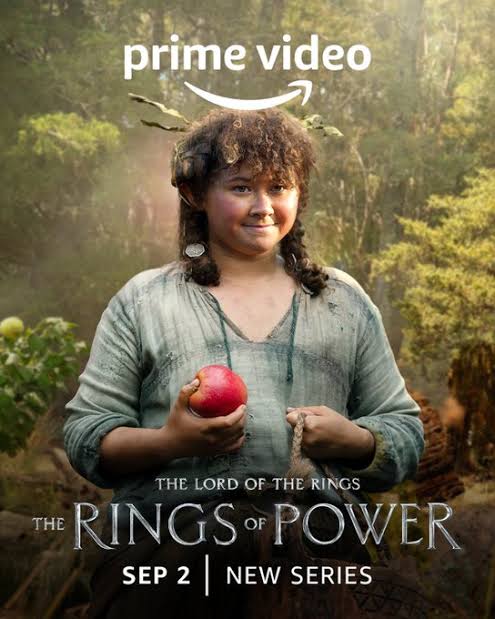 She’s Nori’s mother and she is also a Harfoot. Sara stated, “My character is Marigold Brandyfoot. She is the matriarch of the harfoot tribe. She is a mother, probably first and foremost.

She is a parent to Nori and Dilly, a surrogate mum to the wonderful Poppy, and wife to the incredible Largo, played by Dylan Smith. She’s finding a bit of a struggle in her inquisitive daughter Nori, who has sort of differing ideas about how the harfoots should continue living.”

A Númenórean seaman and Isildur’s father who will eventually become a leader in the last Elves-Men alliance.
Owen said, “Elendil is a hero archetype.

Like all heroes, he’s a reluctant hero, and it’s a journey and struggle between his head and heart while trying to navigate his way through politics and keeping his family safe and stable.” 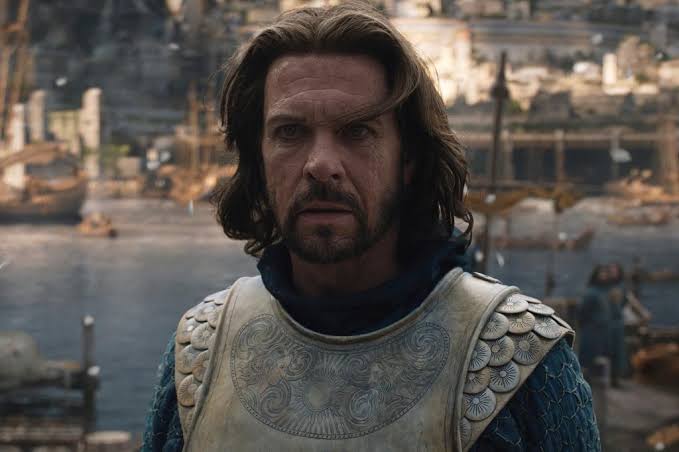 Isildur’s sister, who was made up for the show. Ema stated, “To my friends, I’d say, “Do you remember that naughty guy [Isildur] who didn’t throw the ring into the fire? I’m his little sister.” 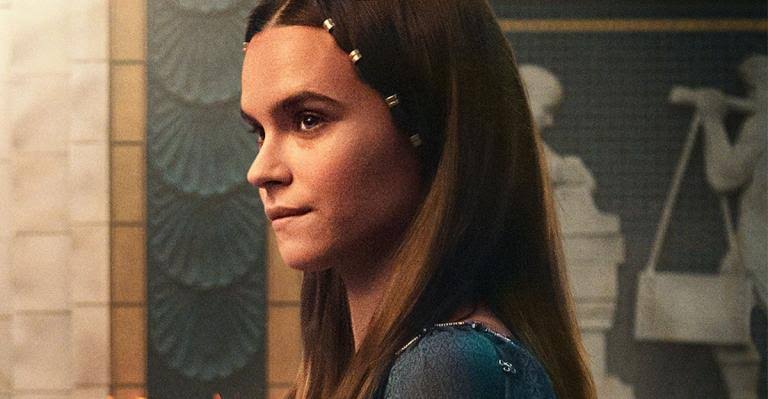 A healer and human mother who possesses an apothecary in the Southlands. Boniadi talked about the production design and how it affected her performance.

“Many of us here have been on big sets, and we’ve worked on big productions. Never before have I experienced anything to this degree of detail. The number of the crew I think was unprecedented. I think it was like 2500 total.

So it’s unprecedented in many ways. And the attention to detail — the artistry in every department — was impeccable.” 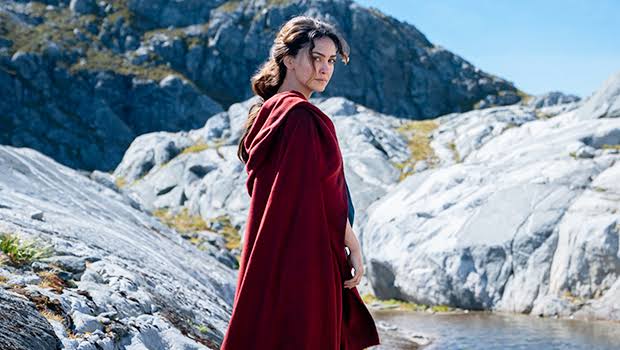 He is a human on the run from his old days, and his fate is intertwined with Galadriel’s.

Charlie described his character by saying, “When we meet Halbrand at the start of his story, he’s a man at a crossroads in his life, in that he’s come from a place of pain. He’s from the Southlands, and his people are being punished for fighting on the wrong side of the war at the end of the First Age. 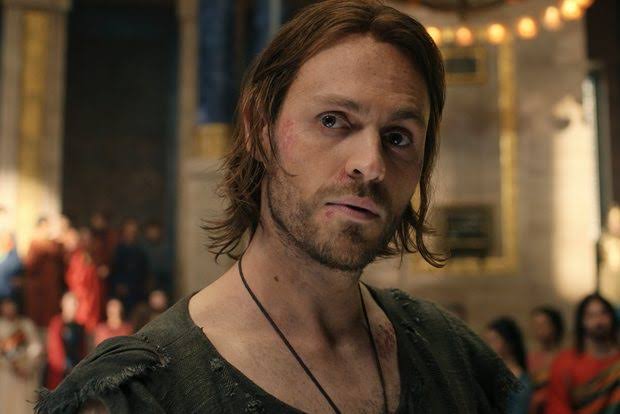 So he’s leaving his past behind him, making an attempt to start a new life. Inadvertently, it leads him to meet Galadriel. They develop a really interesting dynamic between them over the course of the season.”

Well, he is Númenórean advisor to queen regent Míriel. He described his character by saying, “Pharazôn is the Chancellor of Númenor. He is the cousin to Míriel, who is the Queen Regent, who’s ruling in the stead of her sick father, Tar-Palantir. I guess he’s the glue that binds the fabric of Númenor together. 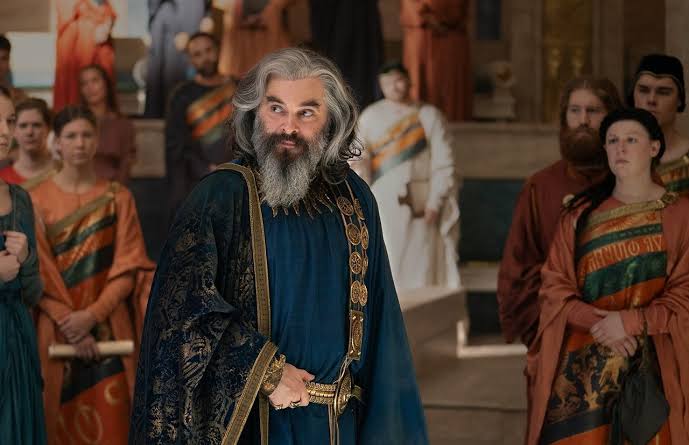 In short, he is Pharazôn’s son. Leon gave a thoughtful description of Kemen by saying, “He’s a son of a powerful politician, and keen to follow in his footsteps. But he doesn’t have a lot of real-world experience. He’s more passion, less experience — and has been getting by largely by charm alone.” 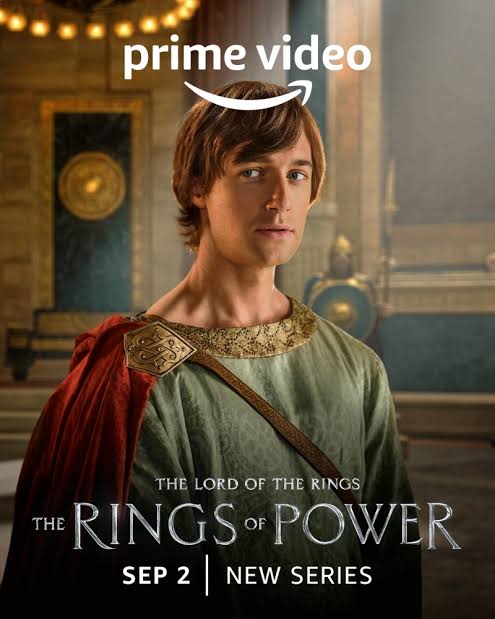 There are more newcomers, and they are all gearing up for another incredible journey together. What are your thoughts on the newbies? You’re also welcome to stay tuned with us for more updates.