The Quest Trailer and Disney+ Release Date is Here

The Lord of the Rings film franchise producers are back with an epic fantasy story, The Quest. The series is set to release on Disney+ on May 11, 2022. The ambitious new competitive series is a groundbreaking genre where real-life teenagers are placed in a fully realized fantasy world. Let’s get to know more about The Quest.

I still cannot forget what Lord of the Rings gave me as a child. I was astonished to see those visual effects and characters that we seldom witnessed. Lord of the Rings took its fans into a whole different world, and I pity if you haven’t watched it.  Now, the epic producers are back with The Quest and I cannot wait for its release.

The executive producers Elise Doganieri and Bertram van Munster stated, “What makes The Quest so unique is that it’s a true hybrid of scripted and reality. It’s a groundbreaking new genre where we place real teenagers in a reality competition and bring them into a fully realized fantasy world that is built on scripted mythology of intrigue and adventure played out alongside actors for a completely immersive experience.” Remember when The Quest was released in 2014 on Disney+ and ABC? Allow me to refresh your memory. The 2022 series is the second season of The Quest that was released way back in 2014.

The plot is the same. Twelve contestants embark on the world of “Everealm,” a land of magic and malevolence. Contestants encounter mythical creatures and other mystical beings. But this time, it’s eight teens.

Yes, The Quest is all about the eight teens enlisted as “Paladins” that are put into Everealm, a fantasy kingdom that is all about castles, royals, ethereal fates, mystical creatures and a sorceress who is keen to destroy the world. They compete and improvise their way through various challenges.

We don’t know what other changes have been made but according to the previous series, each episode consisted of the contestants (also called “Paladins”) who compete in a challenge related to events in the storyline. The winning Paladin receives a “mark” of a virtue corresponding to the challenge; it is a medal that the Paladin wears.

The mark would not save them from elimination. A predetermined number of losing Paladins are subjected to a subsequent challenge (the “Fates’ Challenge”), and the winner of that challenge remains safe from elimination (“banishment”).

The remaining Paladins, including the winner of the Fates’ Challenge, decide which of the losing Paladins should be banished; the Paladins deliberate as a group and then each publicly stands behind the Paladin he or she wishes to save from banishment.

The Paladin with the least support is banished. Disney hasn’t revealed yet if it has made changes to the set-up of the game. However, we’ll see eight real-time teenagers competing against the challenges posed by the Everealm. And one this is sure, it’s a lot more evil power this time.

Disney is all about The Quest…

The Quest’s trailer is out! Disney is about the blend of the world of competitive TV with an epic fantasy story in the Quest. The series will showcase will place real-life teenagers into a reality competition and put them into a fantasy world. Interesting, isn’t it?

Disney+ has its definition of what The Quest is about. The American multinational entertainment and media conglomerate explained Quest as:

“The Quest is a groundbreaking, immersive, hybrid competition series that drops eight real-life teenagers (Paladins) into the fantastic, fictional world of Everealm, where they must save a kingdom by fulfilling an ancient prophecy. Throughout the eight-episode series, these heroes are immersed in a fantasy world come to life, complete with a castle, royals, ethereal fates, all forms of mystical creatures, and a sorceress intent on destruction and power.”

About the World of Everealm 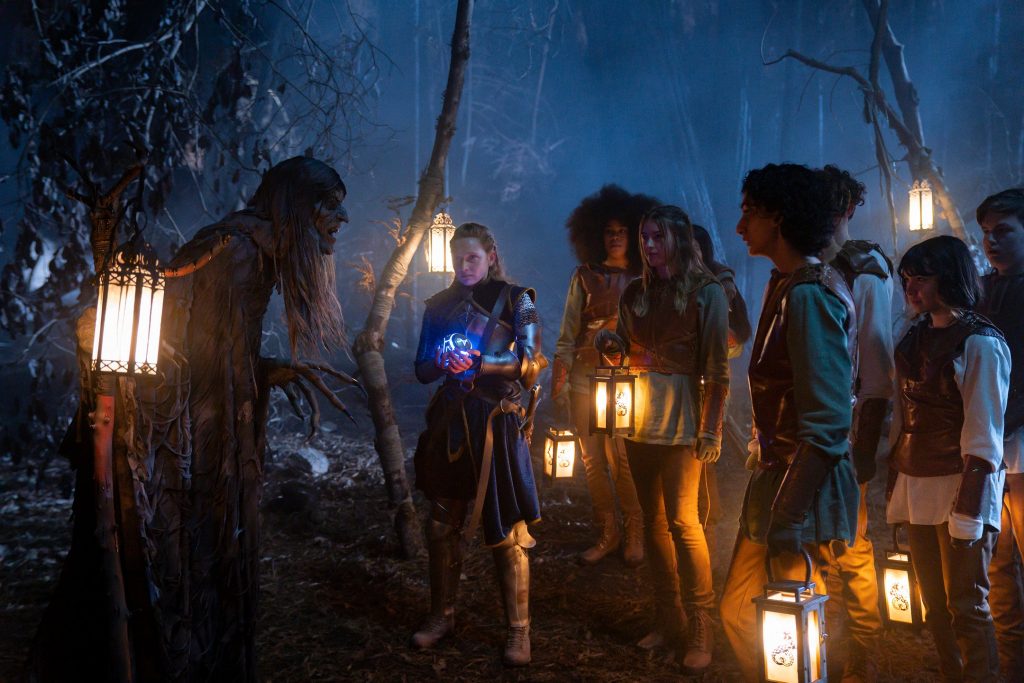 Disney revealed that the series will include the world of Everealm. It is a fantasy world full of unrivalled beauty and magic. Remember the fantasy Middle-Earth in Lord of the Rings where we could see Elves, Hobbits and humans? It is something like that.

According to the previous creation, Everealm is a magical land of twelve peacefully coexisting kingdoms that is periodically menaced by a dark power “Verlox”. It is said that Verlox appeared a thousand years ago. The old gospels state that each time Verlox appears, the three Fates summon twelve Paladins, heroes from our world who are transported to this fantasy world.

Each receives one piece of a mystical weapon called the Sunspear. The Paladins are tested by the Fates until one True Hero remains, who is destined to use the Sunspear to defeat Verlox.

Disney explained Everealm by saying, “For thousands of years, Everealm has been a land of unrivalled beauty and powerful magic. Now, the realm is threatened by a powerful evil Sorceress. As a last hope, the noble Fates summons eight strangers known as Paladins from a world beyond to work together to fulfil an ancient prophecy and vanquish the Sorceress. The Paladins must unlock the hero within through a series of challenges that push their limits to restore balance to Everealm. If they fail, all will be lost. Heroes will rise, kingdoms with fall.”

The Quest is set to release once again on March 11, 2022. It is almost after eight years since the producers have decided to come back with this unique genre. Get ready to witness a world where reality meets fantasy. What do you think about The Quest?