Simon Cowell recently went down on a knee and proposed to Lauren Silverman. The 62-year-old proposed to the 45-year-old socialite while the two of them were on a walk in Barbados. The pair was on a family vacation. The sweetest part about the engagement was that their 7-year-old kid and Silverman’s oldest kid were in attendance making it a complete family affair. Cowell proposed 13 years later at the same place that they met, an island in Barbados.

The two of them met for the first time in 2004. Back then, Lauren Silverman was married to Simon Cowell’s close friend and real estate mogul Andrew Silverman. They even have a son together.

Rumors of an affair between Cowell and Lauren Silverman were rife. They had continued seeing each other and Lauren got pregnant in 2013. Soon after, the couple filed for divorce.

Since then, Cowell and Lauren have been together but they have mostly tried to keep their romance private.

Simon Cowell and Lauren Silverman welcomed a baby boy. Cowell had earlier said that he did not want to become a father due to responsibilities.

But after the birth of his son, he felt that parenthood with Silverman changed him for the better and introduced him to the other side of life. 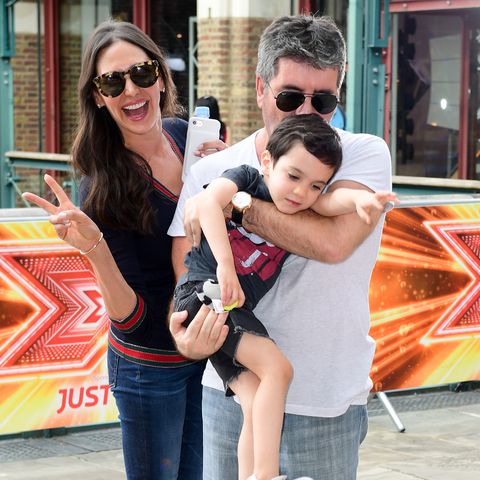 Simon Cowell went on to the Kelly Clarkson Show and said “From that moment I saw the [ultrasound] scan, I was like ‘That is it, I’m besotted.’”

The doting father also added “Now I just cannot imagine my life without him. He’s the most amazing thing that ever happened to me. I adore him.”

The couple usually refrains from posting about each other on social media, but they do appear at red carpet events together. In 2018, Cowell received a star on the Hollywood Walk of Fame and the Pride of Britain Awards in October 2018.

He gave a special shoutout to his partner in the receiving speech. He said, “Lauren, you’ve been my rock for the past few years, put up with everything I put up with.”

Talking about being a mother and being with Cowell, she said “I have three boys now, including him. He’s lots of fun, he makes us all laugh a lot.”

She also added that “I think Simon has changed me. He makes me laugh all the time. I can’t get angry with him because when I’m trying to be cross, he just makes me laugh.”

Simon Cowell was on a family vacation with his girlfriend on an island in Barbados. This was the same place where they met 13 years ago. Cowell went down on a knee and proposed to Lauren Silverman. Cowell proposed on Christmas day. Their son Adam and Lauren Silverman’s oldest son were also there to witness the special moment. A representative said that “they are both super happy”.

A wedding date has not been set as of yet, but it is believed that when it does happen, it will be a grand one.