The former talk show host Rosie O’Donnell has made her relationship with her new girlfriend Aimee Instagram official. Continue reading, to see their first photo together and learn more about their whirlwind romance. On Wednesday, the Sleepless in Seattle star took to her Instagram to share an adorable selfie of herself with her girlfriend Aimee on the first day of the Pride Month.

Aimee posted a picture with Rosie on the social media platform Instagram. She simply captioned the photo, “Happy PRIDE!”, with a rainbow, heart, and kiss emoji. Then, Rosie put up a screenshot of the post on her Instagram feed.

Last month, Rosie subtly hinted that she was seeing someone at the moment when she posted a photo of her hand resting on an unidentified woman’s leg. And now we are so glad we can the face of her love.

In the photo posted by O’Donnell, we saw her as she held the mystery gal’s heavily tattooed hand. “how’s ur weekend? #spokane”, she captioned the photo. As of now, we don’t know the last name of Aimee, during a podcast called Lesbian Speaking in 2021 she stated that she was brought up as a strict Mormon in Boise, Idaho. Rosie got married to Kelli Carpenter in 2004

Kelli and O’Donnell tied the knot in the year 2004. The duo exchanged their vows on February 26, 2004,  in San Francisco two weeks after Mayor Gavin Newsom authorized the granting of marriage licenses to same-sex couples. Carpenter is a co-founder of R Family Vacations and travel advisor at Tzell Travel.

At that time, Rosie talked about her marriage to Kelli and she said, “We applied for spousal privilege and were denied it by the state. As a result, everything that I said to Kelli, every letter that I wrote her, every e-mail, every correspondence and conversation was entered into the record … I am now and will forever be a total proponent of gay marriage.” 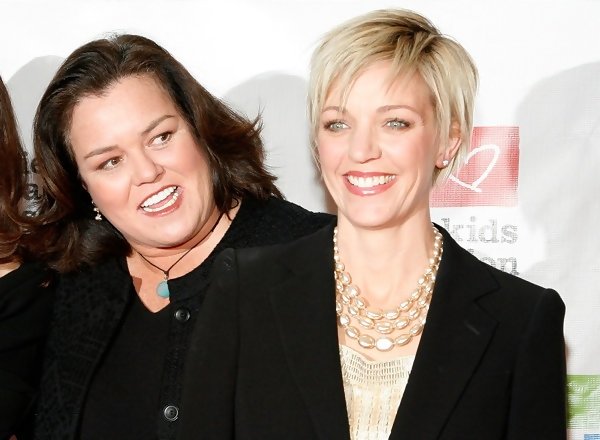 Rosie had adopted her first child Parker in 1995 and after her marriage, Parker was also adopted by Carpenter. The two of them share a total of four children including Parker, 26, Chelsea, 24, Blake, 22, and Vivienne, 19. Their marriage ended in August 2004 and it was among others that were annulled by the California Supreme Court.

Rosie tied the knot with Michelle Rounds in 2012

O’Donnell sparked dating rumors with executive-search consultant Michelle Rounds in the mid of 2011. Rosie shared the great news of her engagement to Michelle on December 5, 2011, during a break in the taping of The Rosie Show.

Rosie and Rounds got hitched in a private ceremony in New York on June 9, 2012. The two of them revealed that they had adopted a baby girl on January 9, 2013. They named their daughter Dakota. The 60-year-old filed for divorce from Michelle after two years of marriage in February of 2015. Their divorce got finalized in October 2015 and O’Donnell received full custody of the pair’s child. Michelle died by suicide in 2017.

We are happy to see that Rosie O’Donnell has found someone who makes her happy. Don’t forget to stay tuned with us for the latest updates from the world of showbiz.