It’s a wrap for Pete Davidson! The 28-year-old Saturday Night Live star made his final appearance on the show during Colin Jost’s Weekend Update. Pete revealed that millions of fans are wondering if he’d bring up Kanye in his final act, and here he is. Read on to know more about what he joked about. 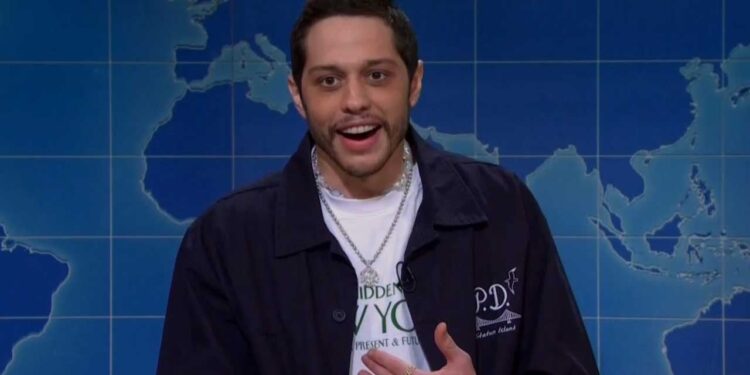 The Saturday Night Live star Peter Michael Davidson bid adieu to his show during the Season 47 finale. And, Pete did it in style. He said, “Hello Colin, and Che — and millions of people seeing if I’ll bring up Kanye.” Pete referred to his girlfriend Kim Kardashian‘s ex-husband Kanye West. Well, it seems like, Ye is not the only one who is known for mocking Pete and Kardashian for a very long time.

If you don’t know this, like Ye, Pete Davidson has had issues with mental health too. He revealed it as he made his final appearance on SNL’s Weekend Update by stating that Kanye should continue taking medication. He also joked by saying,  “if I was on a plane and the pilot went like this is the real me!” If you remember, In Davison’s newly released special, the actor talks about how Kanye west trolled him by “confessing” he had AIDS. In a clip released by Netflix, he starts by saying “I had an AIDS scare this year,” After Pete went to the doctor it turned out that “he only looked like he had Aids” according to the stand-up skit.

He continued his set by mocking West, saying “Does anybody else secretly hope that Kanye showed up as Mrs Doubtfire? I would come home and someone would be like this is the new housekeeper and He’d be like What up Fam!?” Pete also elaborated that when he meets people it always goes 50/50, that they either say “Hey man, you’re really cool, or they say Hey yo, f-k you!” Well, Pete is one hell of a sporty guy.

Pete Davidson is known best for playing himself (oops, Chad) on the legendary show. SNL is like a breath of fresh air to many of his fans. Well, the comic did bid farewell to the show by getting as real as he could.

Pete Davidson joined SNL during season 40 at the age of 20. He was one of the youngest cast members during that time, mostly known for breaking into sketches during his early years, but he won many fans along the way. In the final episode, he made references to the Oscar slap, his ex-girlfriend Ariana Grande, his mental health struggles and a lot more.

Davidson admitted that he had never imagined that this would be his life. Davidson made his first appearance on SNL during Weekend Update on the very first episode in September 2014. He said, “Back then, I was just like a skinny kid and no one knew what race I was. Now everyone knows I’m white because I became hugely successful while barely showing up to work.”

He pointed out that Tucker Carlson had mocked the controversial Republican lawmaker to whom Davidson was once forced to apologize in person after making a dumb jab in a previous Update segment. The comic admitted the heat he took for it “clearly still bothers” him.

When asked by anchor Colin Jost if there was anything Davidson would miss after leaving SNL, the King of Staten Island star named show boss Lorne Michaels. Colin said, “He’s amazing. He’s led us through the COVID era even though the only time he wears a mask is at his Eyes Wide Shut parties.”
Davidson said, “Really, this is all true advice that Lorne’s given me. I’ll never forget this, I called him when I got engaged, I said, ‘Lorne, I just got engaged to Ariana Grande after dating for two weeks,’ and he said, ‘Oh, hold on for dear life.'”
An emotional Davidson also revealed that when he auditioned for SNL, his boss asked him not to think that he is right for the show.  He further stated, “Michaels said, Let’s screw this up together, and that’s exactly what we did. That’s why people who don’t think I deserve this job shouldn’t hate me since we have so much in common.” He added,  “If anything, I should inspire hope that literally anyone could be on Saturday Night Live. Seriously, you see a guy bumming cigarettes outside a 7-Eleven at 2 a.m., that’s not some meth head, that’s the next Pete Davidson.”
In the end, Pete stated that  “I appreciate SNL always having my back and allowing me to work on myself and grow. Thank you to Lorne for never giving up on me or judging me even when everyone else was, believing in me and allowing me to have a place that I can call home with memories that will last a lifetime. So thank you, guys.”
Well, this is not the end for Kim Kardashian’s newfound love. Davidson’s career is still skyrocketing as he is set to appear in A24’s upcoming horror-comedy Bodies Bodies Bodies, romcom Meet Cute alongside Kaley Cuoco and Peacock’s  Bupkis, a fictionalized comedy based on Davidson’s life starring Edie Falco as his mother. Pete, SNL was just too much fun with you and you’ll truly be missed. Thanks for all the laughter!
Share
Facebook
Twitter
Pinterest
WhatsApp