“Orange is the New Black” star, Natasha Lyonne appeared on “The Tonight Show Starring Jimmy Fallon” and spoke about her series “Poker Face”. The series that debuts tomorrow (Jan. 26) on Peacock, features guest stars like Hong Chao and Stephanie Hsu, who got nominated for the Oscars today. Read on to know all about this candid conversation. A Revolving Door Of Guest Stars…

Jimmy Fallon congratulated Natasha Lyonne for her series “Poker Face”, which is scheduled to debut on Thursday (January 26, 2023) on Peacock. For the show’s creator Rian Johnson, Jimmy Fallon stated, “Rian and I go way back.” After showering some praises on the creator, Natasha revealed that Hong Chao and Stephanie Hsu are guest stars on the upcoming show. FYI, both stars got nominated today for the Oscars.

Jimmy expressed, “The guest stars on the show sound insane.” He also mentioned Chloë Sevigny, who appears as Ruby Ruin, the frontwoman for a heavy metal band. Apart from this, the duo talked about the villain of the show, Benjamin Bratt, who appears as the casino head of security. This is the guy who chases Charlie (Natasha) across the country.

Natasha also mentioned some famous names like Adrien Brody (who plays the casino boss) and Nick Nolte. Well, the list surely goes on and on. Jimmy asked next, “How do we describe Poker Face except high-octane?” Natasha revealed, “Well, everything is high-octane. It’s sort of a throwback, sort of the 70s…but then it’s brand new sort of throwback,” she added while speaking about the 70s California. 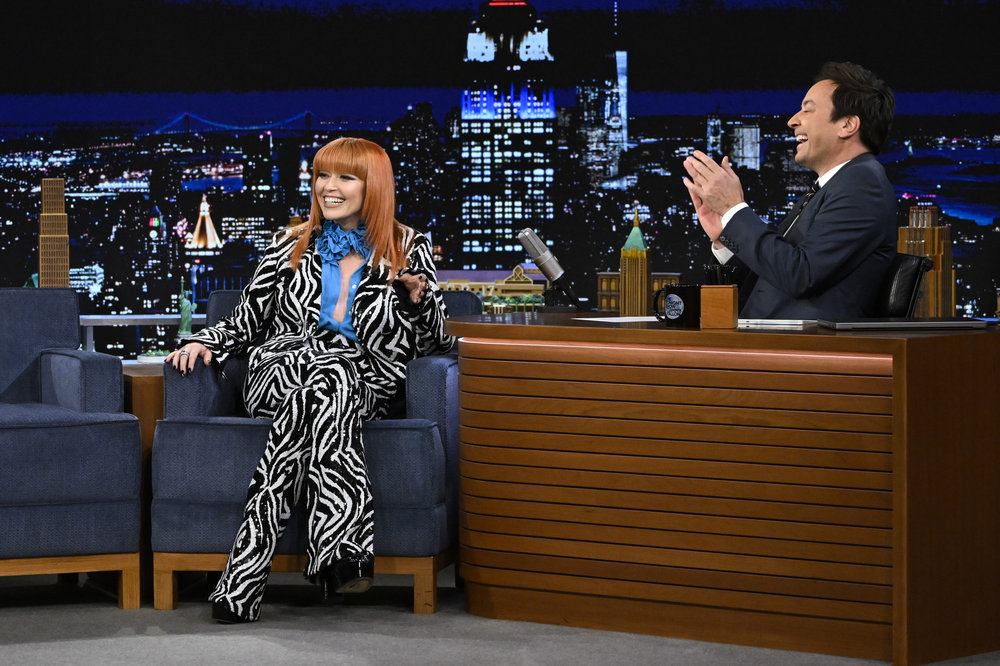 Previously, Natasha described working opposite so many guest stars as mostly great and seemed amused by those that were perhaps more challenging. “Sometimes somebody comes in and it’s just really joyous. It’s like making music with this really cool musician you didn’t know you were going to play so well with. Other times it’s like, ‘Oh, wow, so this person just doesn’t memorize their lines.”

She added, “OK, this is going to be a long, long day.’ It’s sort of a mixed bag sometimes. I would say that the calibre of people that we were able to put together is definitely, maybe like 99% really, really awesome. There were a few that were like, ‘This is sticky business.’ You never know. You never know.” The upcoming series, “Poker Face” can be described as a “case-of-the-week” mystery comedy-drama. The series will be character-driven and each episode follows the ‘howcatchmen’ format popularized by Columbo. One of the episodes of this series is directed by Natasha.

For the first time ever, Natasha Lyonne, who is known for her wise-cracking, quick delivery, is set to play a character with a personality trait she is never played before. The American actress plays the role of Charlie (someone who likes people) in the upcoming Peacock series “Poker Face”.

To understand it better,  Lyonne says the character is partly inspired by Jeff Bridges’ famed character, The Dude, in “The Big Lebowski.” As for her character, Natasha said: “She’s “a person a little bit set back who’s kind of got sun on their face. I’m usually more of a city slicker and someone who avoids getting hit by taxis and runs down a subway.”

Previously, the show’s creator Rian Johnson added about her character, “Charlie’s very open. She’s very sunny. That kind of blew Natasha’s mind. She’s like, ‘Oh, this will be a new thing for me to play. I like people.’ The natural kind of like acidity and sharpness of Natasha’s personality, combined with a character who has a genuinely sunny outlook … I find it’s super watchable.”

If you’re still confused about this show, Rian previously revealed in an interview that “Poker Face” is a howdunit and unapologetically a procedural. Natasha’s character, Charlie knows who commits the murder but has to figure out how. “We follow the same format with every single episode. We show the murder, and then we flashback and see where Charlie was during the murder. We catch up with the murderer and then she solves it.”

He added, “Keeping that procedural consistency was a big, big deal to me because when I tune in to TV, part of what I love is hanging out with the same friends over and over. It’s a comforting pattern of getting a new thrill from something that I know what to expect from every single week. There’s great joy in that… I embrace it completely.”

“As opposed to Glass Onion and Knives Out, these are not ‘whodunits,’ these are ‘howcatchems,’” Rian revealed about the concept. In each episode, it’s Natasha versus a guest star along with strange crimes she can’t help but solve. Johnson added, “These [episodes] are modeled in that way after Columbo, where you show the killing and then it’s about Natasha versus the guest star and how they’re going to take them down.”

As Charlie embarks on a new mystery every week, there’s a huge list of notable guest stars throughout the 10-episode first season, including Lil Rey Henry, Tim Meadows, Luis Guzman, Cherry Jones, Andien Brody, Joseph Grodon-Levitt, Chloë Sevigny and many more. Nick Nolte, who appears in an episode that Lyonne directed, described it as a “sensational” experience.

Well, we all know the series is gonna be a real cracker. Alongside a huge list of talented guest stars, we get to see Natasha Lyonne in action. The lady received an Emmy nomination for “Orange is the New Black” and three other Emmy nominations for “Russian Doll”. Poker Face will consist of 10 episodes and is scheduled to debut on January 26, 2023.