British supermodel Naomi Campbell has praised Kate Moss, a highly successful British supermodel. The 52-year-old model who first appeared in Bob Marley’s “Is This Love”, posted several Instagram stories praising her pal for taking the witness stand on behalf of Johnny Depp in his defamation trial against Amber Heard. Yesterday, Kate Moss gave a three-minute testimony as a rebuttal witness via video call while denying Amber’s claim that Depp pushed her down the stairs. Now, Naomi Campbell has come forward to show her praise publically for Kate. Naomi’s Instagram stories are all about Kate Moss and Depp. 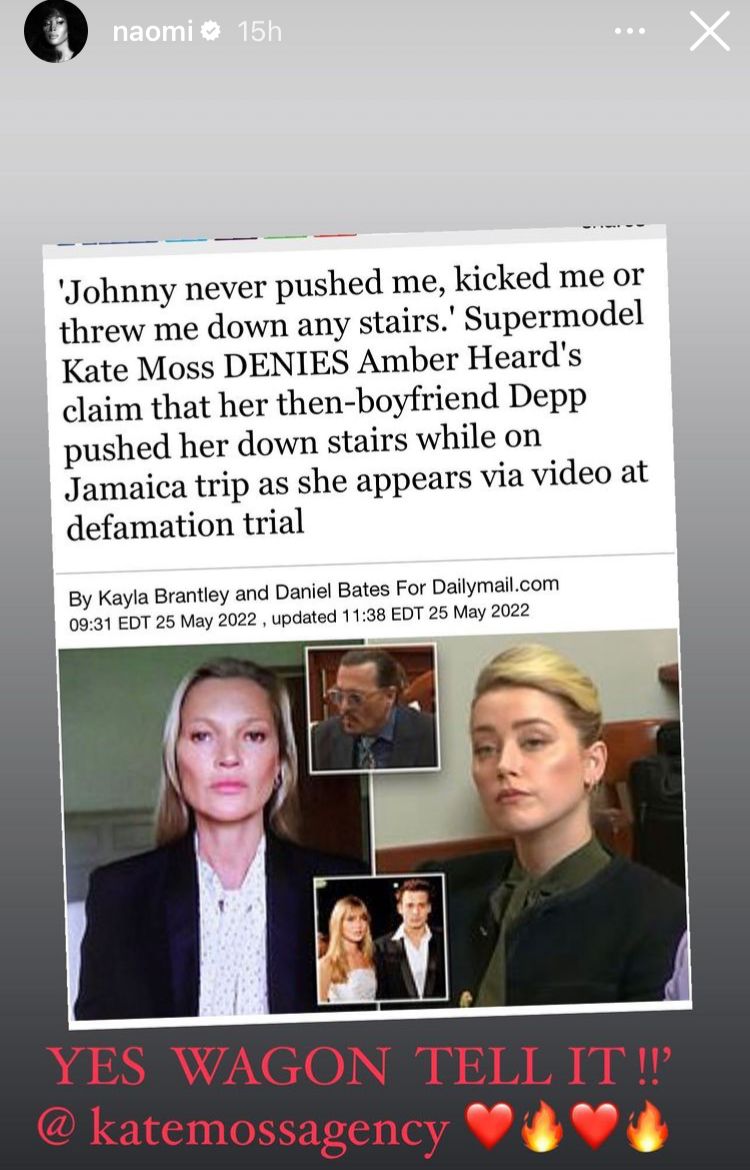 “YES WAGON TELL IT !! @ katemossagency,” Campbell, 52, wrote, using the nickname she has used for Moss, 48, for years. Campbell’s words were accompanied by a screengrab of an article recapping Moss’ statements in court, in which the model denied Heard’s claim that Depp pushed her down a flight of stairs during their ’90s romance. Naomi Campbell became one of six models of her generation declared supermodels by the fashion industry and the international press. She has around 12.7 million followers on Instagram. Yesterday, she took to her Instagram stories to praise Kate Moss for her strong testimony in favour of his ex Depp.

In addition to her modelling career, Campbell has embarked on other ventures, including an R&B studio album and several acting appearances in film and television, such as the modelling-competition reality show The Face and its international offshoots. Campbell is also involved in charity work for various causes. Moss clarified the rumour after stating, “We were leaving the room and Johnny left the room before I did. There had been a rainstorm and as I left the room I slid down the stairs. I hurt my back. And I screamed because I didn’t know what had happened to me and I was in pain. He came running back to help me, carried me to my room and got me medical attention.”

The “Aquaman” star’s allegations were shut down by the British model as she revealed what exactly happened. She stated that Johnny Depp never pushed her or kicked her from the stairs. Moss has previously spoken in an interview that she cried for several months after her breakup with Depp.

Kate and Depp were an iconic couple of the period: a potent combination of beauty and cool, all dangerous cheekbones and grand passions, with a shared love of poetry, narcotics and alcohol. The two were “wildly” in love. Depp’s trial is now in its sixth and final week in Fairfax County Circuit Court in Virginia. The jury will provide their verdict on May 27, 2022.