Iman Vellani, who plays Kamala Khan on Ms. Marvel, appeared on Late Night Show With Seth Meyers and confessed to having several fake accounts on Reddit, which she uses to argue with fans over Marvel fan theories. Vellani also said that “she could breathe” after she kept the entire project a secret for two years and that she enjoyed arguing with fans using the knowledge she has.

Now, if you’re a Reddit user, be careful about who you talk to on Reddit, because any one of them could just be Iman Vellani, as the Ms. Marvel star admitted to using fake Reddit accounts to interact with fans online.

Vellani confessed to Seth that she has plenty of private accounts, and has used those to interact with fans online. She said: “I’m not present on social media publicly, but I do have like a lot of private accounts, especially on Reddit. I’m just like arguing with people about theories. I’m like “You don’t even know what’s coming, man. Like you’re so wrong.” It’s so liberating.”

Unlike her fellow MCU star Tom Holland, Vellani has proved to not only be skilled at keeping her mouth shut regarding Marvel spoilers, but has even admitted that she is “honored” to do so. Vellani said, “as Marvel fans, we just want to know everything about everything.” 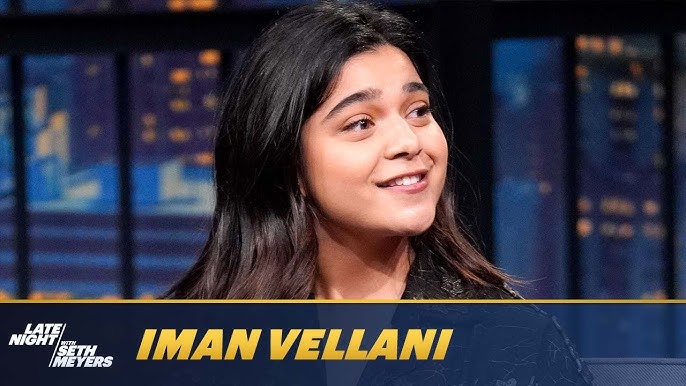 “There… there are subreddits just for the spoilers. Like I’m a part of all of that, but now I know things that people actually don’t know. I know, you know… things about our show and people are guessing things and I know it’s actually true. It’s power,” she continued.

Iman Vellani revealed that one of the biggest spoilers she had to keep a secret was Kamala Khan’s powers resulting from her being a mutant.  This reveal, which featured a brief musical sting from X-Men: The Animated Series theme, was so shocking for Vellani that she struggled to contain her excitement during filming.

“It took a really long time to film that scene because any time Matt [Lintz] would say that word [mutation] I’d start giggling,” Vellani said. Fans on the r/MarvelStudios subreddit who saw the video began to be suspicious of everyone, especially the alt accounts. Some even joked about the idea of Vellani being the “Kang” of the Marvel subreddits, suggesting that there’s going to be an ‘Imanverse.’ Others began the hunt to find these burner accounts, with some mods admitting that they might have accidentally banned some of them without knowing. Iman Vellani told Seth Meyers that she grew up reading Marvel comics. The Ms. Marvel star started by revealing that the show’s producer Sana Khan was on Seth Meyer’s show in 2016. She said, “It was the first thing I had watched after I read the “Ms. Marvel” comic for the first time. And I was like, obsessed with her. I was like, ‘How did she get a job at Marvel Comics and be brown, and be a woman at the same time.”

Iman revealed that she was 15 years that time and was really jealous, and stated that six years later, she is here talking about Ms. Marvel. Seth revealed that Iman is the first Muslim actress to play a Marvel superhero. When asked about her fond love for Marvel comics, Iman replied that she used to spend her allowances on them. Well, here she is! Who knew a girl who’d read every Marvel comic, would end up playing a Marvel superhero.

The actress reminisced on her last day of high school when Marvel producer/casting director Sarah Finn asked her for a video call as Vellani’s friends watched what happened. Vellani had to come to terms with getting the role, hinting to her friends that she had “basically…(won) the lottery. She told Seth:

“It was the last day of high school, and we were out doing stuff, and I get this text from Sarah Finn, and she’s like ‘Hey, can you get on this call?’ And I was like ‘Oh, no!’ And they were like ‘Oh, we sent you the link, get on right now.’ And I was like ‘Ok.’ And I’m in my friend’s driveway and they’re watching me from the car, and I’m trying to not have a reaction because Kevin Feige’s on my phone. My brain was spinning, and then I get back in the car, and they were like ‘So what happened? Did you win the lottery or something?’ I was like ‘Basically!’”

She also revealed that as a Marvel fan she was really into art. Iman told Seth, “It’s funny. During one of our quarantines, I made a little stop-motion with my Iron-Man and Kamala action figures. And I sent it to Kevin Feige and our producers with zero context. It was like literally my action figures, dancing or something. And then, they really liked that.”

She revealed that they even ended up changing the episode one opening animation to be a stop motion instead of a regular animation. Seth revealed that Kevin Feige is the brain of the MCU and is pulling all the strings. Iman revealed that she was nervous when she met him first but they got along really well.

Fans will likely never know how Vellani is interacting with the MCU, meaning it will remain a mystery if a Reddit user engages in an online chat with the MCU’s own Ms. Marvel. However, knowing that she is loyal to fans while working for Marvel Studios, Iman surely has a bright future.