Miles Teller, who plays pilot Lt. Bradley “Rooster” Bradshaw, in Top Gun: Maverick, appeared on The Tonight Show Starring Jimmy Fallon and indulged in a game of Drinko. Apart from this, the “Whiplash” star also shared some interesting details about “Top Gun: Maverick”. Read on to know all about this fun conversation. 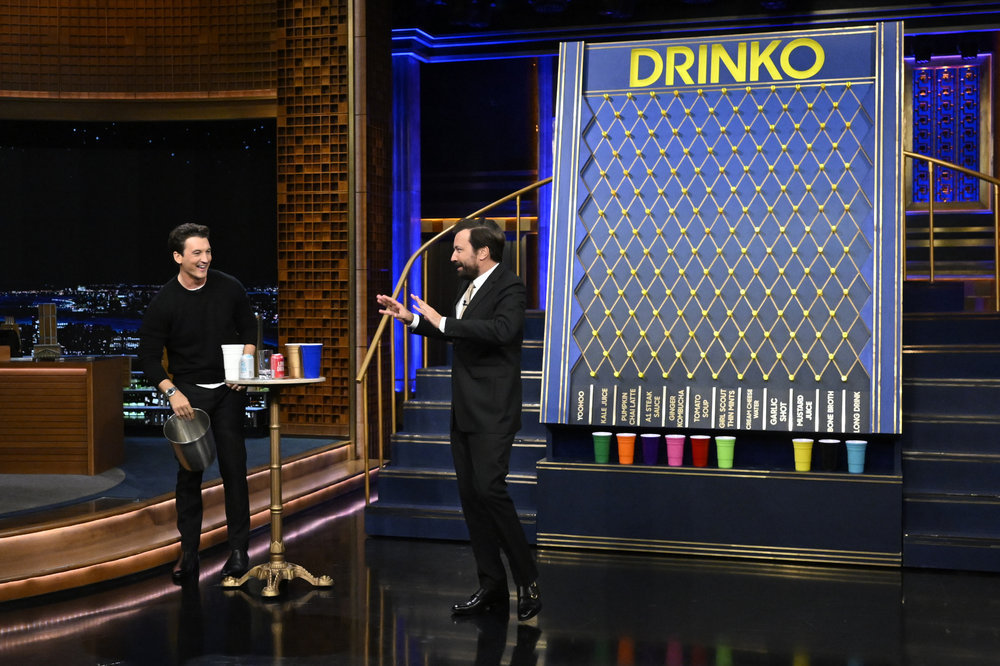 What Is The Game Of Drinko? 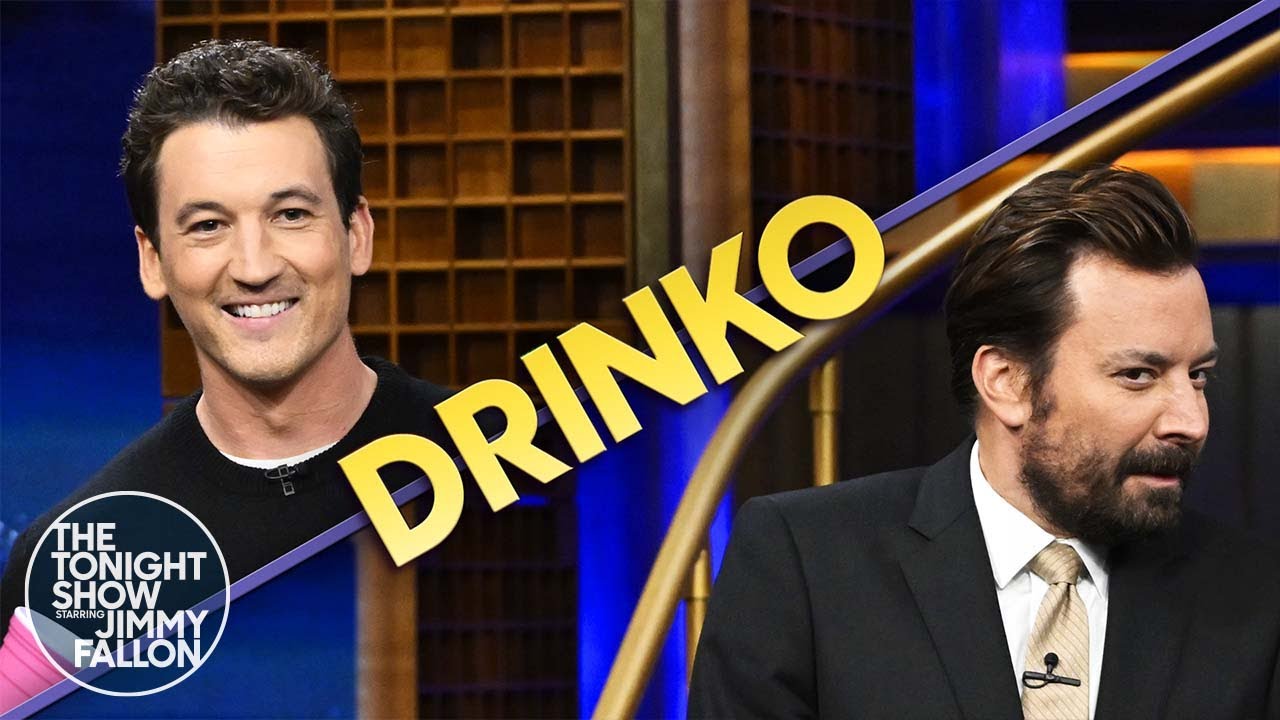 Miles Teller’s experience on Jimmy Fallon’s The Tonight Show was more like a game night. In the beginning, Jimmy shared details about the Game of Drinko is played. As he reflected towards the board of Drinko, a robotic voice said, “Welcome to Drinko, in this game, the two of you will take turns climbing my stairs and dropping two of your disks down the Drinko board.”

Well, beneath the board were some of the craziest cocktails available, at least when it comes to their names. It further explained as the disks will plink down and land on the plastic cups containing some of Drinko’s favourite beverages, like Girls Scout Thin Mint, cream cheese water, and garlic shot.

In this game, the opponent has to drink the cocktail of the two chosen drinks. Jimmy Fallon asked Top Gun’s Rooster to go first for this game. He said, “Climb up the stairs of Drinko and enjoy yourself with a good beverage.” As Miles climbed the stairs, the Drinko board stated, “Drop the disk whenever you’re ready Miles.” 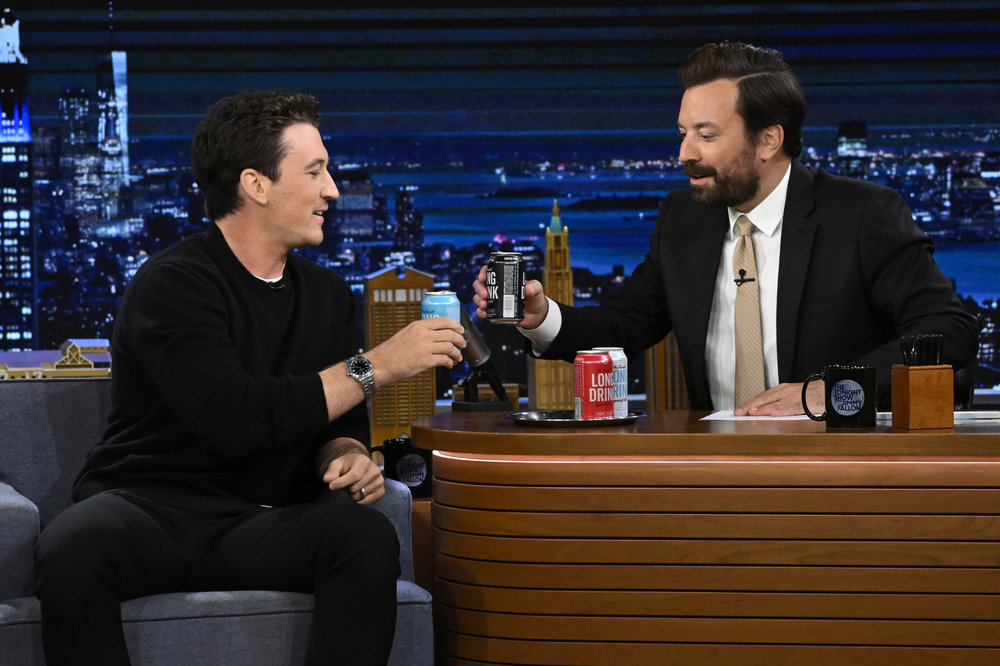 As Miles dropped the disk, it went swirling down and went into the garlic shot. Thank god, it wasn’t cream-cheese water. As the disk hit that cocktail, Miles said, “That’s healthy.” But hey, Miles was yet to drop his second disk and then mix it with another beverage and drink.

As Miles dropped it, the second disk went swirling and went straight into ginger kombucha. Oh well, Miles just got saved. Well, Garlic and ginger sound better than garlic and cream cheese, eh? Miles then transferred both drinks to one glass, added some tonic into it and took the shot straight. Well, the boy’s practised that a lot on Top Gun: Maverick’s set.

After drinking the shot, Miles said, “I feel lighter, I don’t know.” Now, it was Jimmy’s turn to play the game. The robotic voice said, “I want to ascend the staircase and drop two disks in me.” Jimmy laughed as Drinko got a little kinky, but then it corrected, “On me, all over me.”

Now, it was Jimmy’s turn to mix Yoohoo and cream cheese water. He then mixed the two drinks, and with a lot of effort, ended up drinking the hilarious cocktail. Well, he was holding the ice bucket in case he pukes.

After having it, Jimmy said, “It’s so gross.” Well, the game was about to get more interesting. Now, both of them had to drop the disk, and whoever’s disk landed first, would be declared the winner, and the loser would have to drink the resulting drinks. Miles and Jimmy then crawled up the stairs.

As Drinko counted to three, Miles and Jimmy dropped the disk and guess what, Jimmy nailed it as his disk went swirling at the speed of light. The resulting drinks were Yoohoo and the garlic shot again. Well, it was indeed a lucky day for Miles as Jim was hoping it could be cream cheese water. Oh, but then, Miles said, “You can add one more drink for me.”

That was it, Jimmy picked up the cream cheese water, and gave it to Miles, who now had to mix, Yoohoo, Garlic shot and cream cheese water. While revealing that he has a fairly sensitive gag reflex, Miles mixed the three drinks and took the shot without a second thought. Miles would have almost puked, but then he held it back. On this, James said, “Legend right there”.

First Encounter With The Royals… 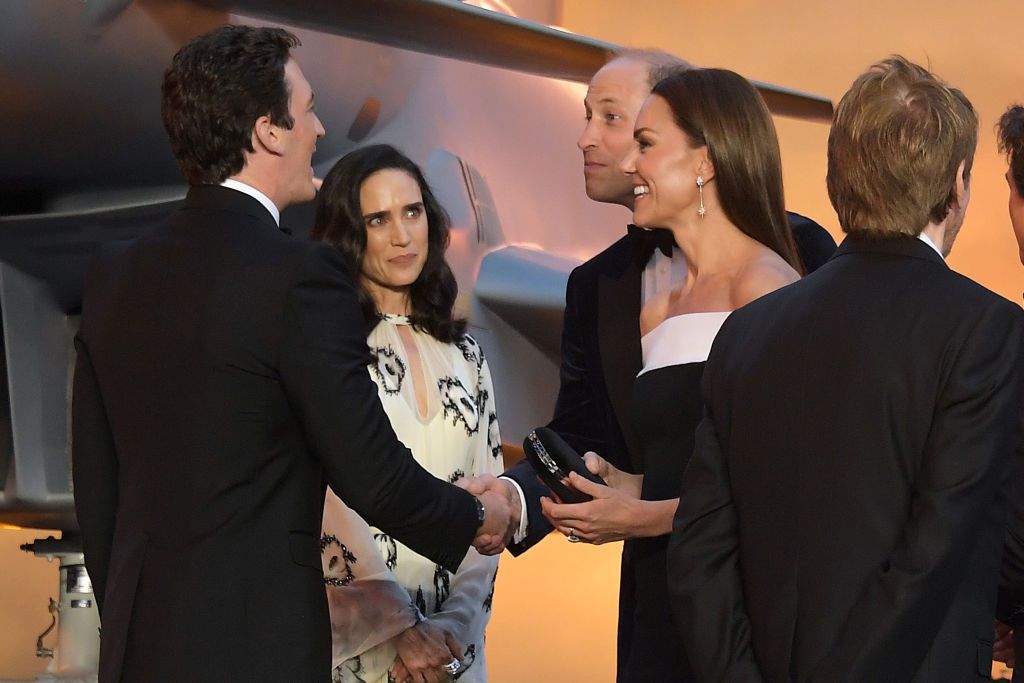 While showing a picture of Miles as a pilot rooster from “Top Gun: Maverick”, Jimmy revealed that the movie was one of the highest-grossing films in American history. Miles said, “People just love Top Gun, they can’t get enough of it.” Well, I’ve watched it like 100 times.

Jimmy revealed that John Hamm was on the show couple of times, and John, who plays “Cyclone” Simpson in Top Gun, stated that Miles met the royals because they screened the movie in London. John also revaeld that the cast was told to be very polite, and not say much. Miles revaeld that they give you, “like a full kind of rules” when you meet the royals.

However, Jimmy revealed a photo of Miles with Kate Middleton and Prince William. In the picture, his co-star Jennifer looked a little concerned, Kate was laughing, while the prince was like, “mm, hmm.” “Can you tell us the story behind the picture?” Jimmy asked.

Miles responded that right off the bat, he messed up because one is not supposed to extend their hand unless they do, but he felt the vibe–so he did it. “To their credit, the real family was very disarming,” he added. Explaining the picture further, Miles said, “I’m honestly lost in Prince William’s–in his eyes–they’re blue as the bluest ocean.”